Frigates and Rafale fighters… A Franco-Greek agreement amid Turkish tension 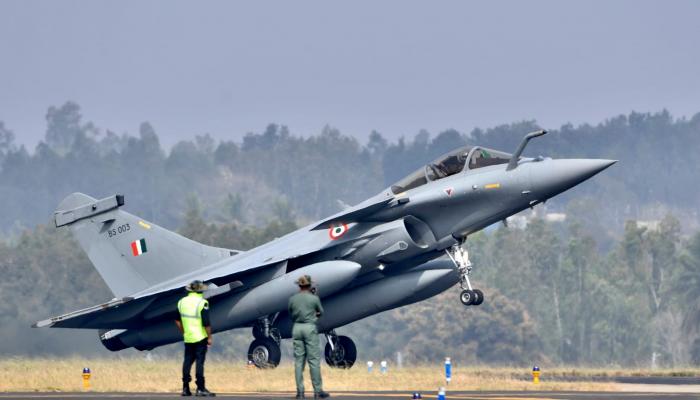 France and Greece will sign, this Thursday, a contract for the sale of 3 defense and intervention frigates and 6 Rafale fighters, within two contracts that constitute a new reinforcement of military cooperation.

In the context of tension with neighboring Turkey, Greece decided last year to strengthen its military capacity and requested 24 Rafale fighters and three frigates from France, for a total value of more than 5.5 billion euros.

In the presence of the General Director of the Naval Group “Naval Group” Pierre-Eric Pommelier, the Minister of the Armed Forces of France, Florence Parly, and her Greek counterpart, Nikos Panayotopoulos, will first sign a contract for the three frigates to be manufactured by the “Naval Group” in Lorient, western France, to be delivered to the Greek Navy in 2025 and 2026. There is an option to purchase a fourth frigate.

Eric Trabet, General Manager of Dassault Aviation Group, will also attend to sign a second contract related to the delivery of an additional six new Rafale aircraft. An agreement was signed last year to sell 18 of these fighters, including seven that were delivered to Greece.

The signing of these contracts, which alone amount to more than three billion euros, comes at a time when relations seem to cool between Greece and Turkey, which have promised additional cooperation in the face of the war in Ukraine.

Greece and France had started to strengthen their military cooperation in the summer of 2020 to counter Turkish attempts to explore for gas in disputed areas of the eastern Mediterranean.

Last September, the two countries concluded a “strategic partnership” in Paris, affirming their determination to strengthen a defensive Europe.

But Greek Prime Minister Kyriakos Mitsotakis told the Greek parliament in February that the modernization of the Greek military is aimed at “strengthening the country’s arsenal.”

But an “unexpected” summit in Istanbul between Turkish President Recep Tayyip Erdogan and the Greek Prime Minister “contributed to improving bilateral relations due to the war in Ukraine,” the former vice president of the European Court of Human Rights told AFP. Christos Rosakis.

Contracts for additional frigates and Rafale fighters will be signed Thursday afternoon on the eve of Greece’s National Day on the Averov, a museum ship symbolizing Greek maritime history, docked in Faleroron, a maritime district on the outskirts of Athens.

On March 25, Greeks celebrate the start of the war of independence from the Ottoman Empire in 1821, and for this occasion the French aircraft carrier Charles de Gaulle called at the port of Piraeus.

The two French ministers and the heads of the two French groups will go there after the contract is signed on Thursday.

The Rafale plane will take off on Friday from the Charles de Gaulle aircraft carrier off Crete to take part in the traditional military parade, which is organized in Athens and will be attended by Florence Parly for the second consecutive time.