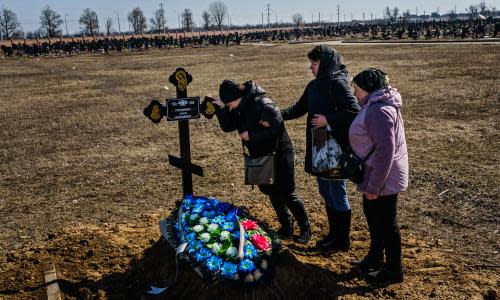 Good morning to all. I’m Martin Farrer and this is the top news right now.

Joe Biden will travel to a Polish city near the Ukrainian border today in a show of solidarity with the war-torn country and in a bid to show Western resolve against a Russian invasion that continues to target cities and civilians. After a busy day of summits in Brussels yesterday, the US president will visit Rzeszów ahead of talks with Polish President Andrzej Duda. More than two million Ukrainians have fled to Poland, which has borne the brunt of the refugee crisis, and Biden will discuss a coordinated humanitarian response to help Warsaw’s efforts. He will also meet with US troops who have been deployed in recent weeks to reinforce NATO’s eastern flank. Biden claimed yesterday that NATO had “never been more united” and warned Vladimir Putin that the West would respond if the Russian president used chemical weapons in Ukraine. Boris Johnson also warned that such a move would have “catastrophic” consequences for Russia. However, EU leaders remain divided over whether to cut off Russia’s oil and gas supplies, and the effectiveness of the sanctions was also questioned last night by Ukraine’s President Volodomyr Zelenskiy, who said the measures had come “a little late” to dissuade Putin.

Some Ukrainian refugees have described being forced to return to Ukraine due to lengthy delays in obtaining UK visas, while others are living in underground bomb shelters in kyiv, dismayed by long waits for visas to be processed. Fighters of the foreign legion are actively trying to get into Ukraine, and now American volunteers appear to fight the invasion. And in Russia, Defense Minister Sergei Shoigu appeared on television yesterday in an apparent attempt to quell rumors that he has been the scapegoat for the faltering invasion. But you had to be quick to catch it. He disappeared again very quickly, fueling suspicions that he has been removed from office. Here’s what we know so far about day 30 of the invasion, and you can also follow developments on the live blog here.

poor show As many as 1.3 million people will fall into absolute poverty next year, economists have warned, as Rishi Sunak sought to counter accusations that he has not done enough to ease the worst drop in living standards in six decades. The Resolution Foundation said the number of people in absolute poverty will rise to 12.5 million, or a fifth of the population. Asked why he hadn’t provided more support to those with universal credit, who will see their benefits rise by only 3% while inflation jumps to nearly 8%, Sunak replied: “We can’t do everything.” Our economics editor says the result is that Britain is no longer a country where workers can expect to get better year after year.

academy winners The government has failed to rein in the excessive salaries earned by leaders of academic trusts, according to MPs who also criticized the use of millions of public money to “support” mismanaged trusts. According to a public accounts committee report published today, the number of academic trusts paying at least one senior staff member more than £100,000 rose from 1,875 in 2019-20 to 2,245 the following year.

bridge block An increasing number of Britain’s road bridges are collapsing. More than 3,200 have been identified as faulty, costing £1.2bn to repair, local authorities say. More than 100 city-maintained bridges have been declared unfit for the heaviest vehicles in the past year, with 17 bridges fully and 37 partially collapsing in that time. Devon has the most bridges in disrepair, 229, while Dorset has had the most collapses, 12.

electric charge The number of electric car chargers could increase tenfold to 300,000 by 2030 following criticism that the rollout of public infrastructure is too slow to match rapid sales growth. The Department for Transport said it would spend a further £450m to install more chargers ahead of a ban on sales of new cars and vans with petrol and diesel engines from 2030. There were 420,000 pure electric cars on the roads of the UK at the end of February. but only 29,600 public charging points.

Stand firm, Mark!!! – American conservative activist Ginni Thomas, who is married to Supreme Court Justice Clarence Thomas, implored Donald Trump’s chief of staff to help overturn the 2020 election results, according to reports. In one of the 29 messages, Thomas wrote to Mark Meadows on November 10: “Help this great President stand tall Mark!… who stands for constitutional government in the United States…” Meanwhile, Trump has sued Hillary Clinton for an alleged conspiracy to rig the 2016 election.

Podcast Today in Focus: The Shameful Case of Child Q

After a 15-year-old London girl was strip-searched by police at her school, her family and community want to be held accountable, Alexandra Topping tells Nosheen Iqbal.

The Bubble is the first mainstream movie to tackle the pandemic and is about a group of movie stars holed up in Cliveden House hotel, Berkshire, in late 2020 to make a dinosaur franchise movie. It seems to point to the actors’ vanity, but director Judd Apatow and star David Duchovny tell Catherine Shoard why the characters could be heroes.

Gareth Bale dazzled center stage when he scored an impressive free kick and a great individual goal in a 2-1 win over Austria to leave Wales one game away from their first World Cup since 1958. Italy again missed out on the stage World Cup final after losing 1-0 at home to North Macedonia in the playoff semi-final when a last-gasp goal from Aleksandar Trajkovski handed the visitors a famous victory. In Glasgow, a Krzysztof Piatek penalty in injury time prevented Scotland from winning a 1-1 friendly on a stirring night at Hampden Park. Saqib Mahmood was heartened by the sight of his England team-mates in their whites preparing to take to the pitch as he and Jack Leach mounted their determined tenth-wicket rear guard on the opening day of the third Test against the West Indies in Grenada.

Emma Raducanu’s tough upbringing in her first season on the WTA Tour has continued as she served for the match in her Miami Open debut, but still lost to Katerina Siniakova in the second round. Rugby Football Union chief executive Bill Sweeney has insisted that Eddie Jones is not “bulletproof” and admitted that England’s performance in the Six Nations was not acceptable. The human rights group Reprieve has demanded that Formula One end its association with Saudi Arabia’s sportswear wash after the family of a teenager sentenced to death wrote to Lewis Hamilton begging him to speak on their son’s behalf before the race this weekend. And the process of deciding on a new owner for Chelsea took a step forward after a consortium from Saudi Arabia was eliminated from the race.

Sir Christopher Hohn, the billionaire head of the TCI hedge fund, has reiterated his support for action on climate change by urging shareholders to vote against “greenwashing” bank directors lobbying against the action. climate. “Any bank that makes a net zero pledge while actively lobbying against necessary climate regulation… is greenwashing,” he said in a statement.

the guardians leads with “Biden’s warning to Putin on chemical weapons”, and the same goes for the Times – “NATO will act if chemical weapons are used, says Biden” – and the Telegraph – “Biden: We will respond in the same way if Putin uses chemicals.” the Mail reflects Downing Street’s delight at the Kremlin’s condemnation of Boris Johnson: “Kremlin: Boris is our number 1 enemy.” The P&O scandal is the subject of several documents with the FT splash saying “P&O boss confesses the layoffs were illegal but says he would do it again”, while the Mirror it has “Shame on you” and the album goes to “P&O pirates”. the I reports “Sunak and Johnson at odds over UK cost of living crisis” and the Fast keeps the pressure on the government over the cost of living issue with a headline that reads: “Why Britain must act to end this despair”. the of the sun The lead deals with the royal visit to Jamaica: “One’s love”, it says.

The Guardian morning report is delivered to thousands of inboxes early every weekday. If you haven’t received it by email yet, you can sign up here.

If you have any questions or comments about any of our newsletters, please email [email protected]

Sign up for Inside Saturday to get an exclusive behind-the-scenes look at the main features of our new magazine delivered to your inbox every weekend.