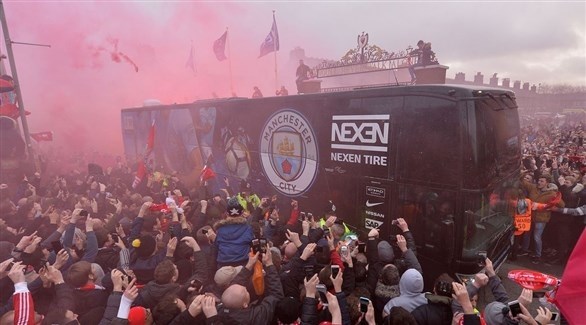 The English Football Association announced today, Friday, that it will provide free buses to transport some 5,000 Liverpool and Manchester City fans to Wembley Stadium, which will host the two teams’ FA Cup semi-final clash on April 16. .

Today, Friday, the Federation confirmed that the game will start at 3:30 p.m., but the fans face a difficult challenge to get to London, since there will be no trains operating on the main line to London during the Easter holiday, due to to engineering work.

“The FA is aware of the significant challenges facing some fans of Liverpool and Manchester City,” the FA said in a statement.

It added: “The FA is pleased to announce that a limited number of free buses will be available to serve fans for both the FA Cup and FA Women’s Cup match between Liverpool and Manchester City on Saturday 16 April, as it will provide fans with round trip service.”

He explained: “The Federation will provide 100 buses from Anfield and Al-Ittihad stadiums to Wembley Stadium back and forth. This will ensure the transfer of around five thousand Liverpool and Manchester City fans to Wembley Stadium free of charge.” .

It continued: “The Federation will also provide a series of free buses to transport fans of the Manchester City women’s team from North West London to the East.”

As for the other semi-final match, it required no further arrangements as it brings together Chelsea and Crystal Palace, both teams from London.

The same goes for the other matchup in the Women’s Championship, which pits Arsenal against Chelsea.