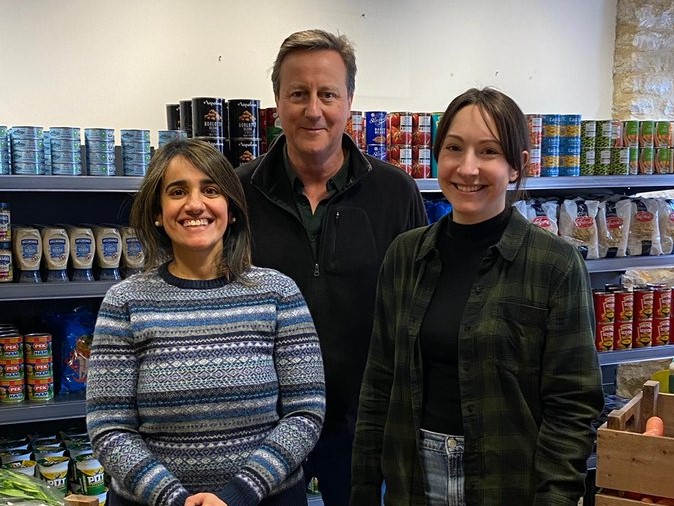 Former Prime Minister David Cameron has been accused of hypocrisy after announcing that he worked at a food bank.

The former Conservative leader revealed that he had volunteered for two years at a food project in west Oxfordshire called Chippy Larder.

He added that he was driving a small truck full of supplies for Ukrainian refugees to the country’s border with Poland after the Russian invasion.

But critics were quick to point out that the former prime minister was in charge of the country during austerity when use of food banks increased.

In the early 2010s, Cameron presided over an austerity program that involved cutting public spending to reduce the deficit. Many blamed benefit cuts for the increased use of food banks.

Playwright Bonnie Greer added: “It might have been more helpful if you and your #Parliament hadn’t imposed #austerity, removing much of the vestige of the Welfare State simply because you didn’t ideologically approve of it. Culture boards full of #Tories etc.

“Sackcloth and ashes more fitting for you, #DavidCameron.”

Trussell Trust, which runs a network of food banks, commissioned a YouGov survey of 1,506 UK adults who claimed Universal Credit between January 24 and February 15.

It found that one in six respondents (17%) needed to visit a food bank at least once since December.

One in three people (33%) had more than one day in the past month when they ate nothing or only a single meal.

Last month, Citizens Advice issued a “red alert” warning as demand for its services soared, with its frontline staff helping record numbers access support like food banks and one-time charity grants amid of the cost of living crisis.

Cameron said donations had been received for refugees from Ukraine and they now had enough “to fill a small truck with everything from diapers to sanitary products to warm clothing to first aid kits.”

Earlier this week, he called for more humanitarian aid to be provided to Ukraine.

Speaking to Channel 4 News, he urged the government to “go back” to devoting 0.7% of gross national income (GNI) to foreign aid, after it was cut to 0.5% last year.

Cameron said the Cabinet should have an aid minister, who would be “100% dedicated” to the role.

Chancellor Rishi Sunak has promised to repay UK aid contributions at 0.7% at the end of this Parliament.

He also said that permanent NATO bases should be created in Estonia, Latvia and Lithuania.