For the first time on a Sunday: the Lätare donation attracts visitors 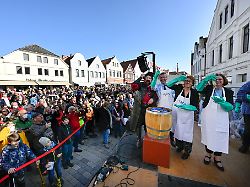 Lower Saxony and Bremen
For the first time on a Sunday: the Lätare donation attracts visitors

Verden (dpa/lni) – On a crowded town hall square and in bright sunshine, the traditional Lätare donation custom took place in Verden on Sunday. For the first time in centuries, the distribution of 530 loaves of bread and 1,600 herrings was not organized on a Monday. “We allow above all workers and families with their children to participate in the distribution and experience this tradition,” justified the step by the mayor of Verden and host of the Lätare donation, Lutz Brockmann (SPD).

Since 1602, according to a legacy from the legendary pirate Klaus Störtebeker, Verden has always organized the donation on the Monday after the fourth Sunday of Lent “Laetare” (Latin: “Rejoice”). The liturgical color of the church is light and pink and in “Laetare” Easter is already approaching. Shortly before his execution in 1401, Störtebeker is said to have decreed that the city of Verden should give gifts to the needy, officials, and clerics each year.

This year’s guests of honor were Johann Saathoff, Parliamentary State Secretary at the Federal Ministry of the Interior, Lower Saxony’s Minister for Social Affairs, Daniela Behrens, and Bremen’s Senator for the Economy, Kristina Vogt. Last year, the corona pandemic prevented the traditional Lätare donation and instead there was a film with greetings.