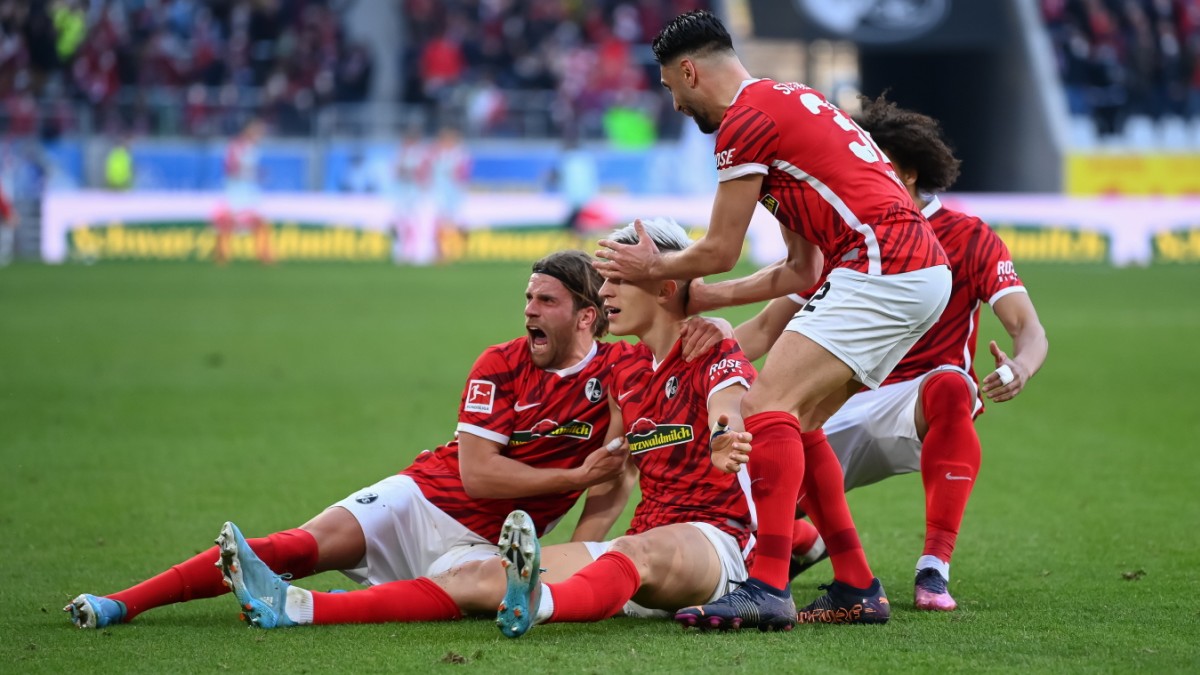 You could probably say that the first half of this game belonged to Freiburg. In reality, however, it belonged to Vincenzo Grifo. Initially he devoted himself to his favorite pastime: shooting free throws. Very well, he lofted the ball over the Wolfsburg wall towards Kreuzeck in the seventh minute, and as Wolfsburg thought it would be a good idea to forget about this Grifo later near the penalty spot, the German-Italian was able to cheer for second time. Cross by Höler, volley by Grifo (he can’t do it on his own from a free kick).

Because Freiburg then thought it would be a good idea to leave Max Kruse alone in the penalty area, Wolfsburg returned to the game with vigor. Wolfsburg stormed through almost the entire second half, especially the final phase was tough: First Maximilian Arnold hammered the ball into the net after an error by Nico Schlotterbeck to level; just a few minutes later, Schlotterbeck corrected his mistake: 3:2. “It was totally emotional,” sporting director Jochen Saier told Sky: “Punk shot up in the stadium, that’s good for all of us.”

After all the misfortune, defeats and falling down the table, Gladbach’s Alassane Plea did not even consider any experiments in this “Krisico” – he took the penalty and brutally hit the ball into the middle of the net. The Hertha BSC opponents, plagued by even worse misfortunes and defeats, have been at odds again for a long time. Referee Badstübner initially did not object to the penalty situation, but the video referee pointed out a foul by Marc-Oliver Kempf from Berlin, by the way, rightly so.

The longer the match lasted, the more obvious it became: the Berliners were completely sidetracked by Gladbach’s first goal. The plan to cover up a 0-0 away win went wrong. Hertha dared a little more in the second half, a hit to the crossbar by Ekkelenkamp was the best result. Ginter’s header finally finished off coach Tayfun Korkut’s restless side. Gladbach have now amassed at least 30 points, Hertha are stuck at 23 and penultimate again.

If VfB Stuttgart are relegated this summer, it will also be due to the arm of Konstantinos Mavropanos. A shot from Grischa Prömel shortly before half-time deflected Mavropanos into the penalty area, but unfortunately with his arm bent. It is the third penalty Mavropanos has conceded this season.

If Stuttgart had lost in Berlin, Mavropanos would have been even more upset. But he was able to thank striker Sasa Kalajdzic, who wanted to do it again shortly before the end, after a very poor offensive performance by Stuttgart for a long time. He first maneuvered the ball into the post, then equalized to equalize at the end of regulation time. Needless to say, the template came from the hand of Borna Sosa. If VfB is to keep class in the summer, it will also be due to Kalajdzic’s goal.

If, when the ball is passed, a player in the opposing half is closer to the goal than the ball and at least two opponents are, it is offside. This is how it has always been in the rule book under point 11 and it was FC Bayern who relearned the paragraph in the 1-1 win over TSG Hoffenheim. The Munich team scored a total of three goals from the prohibited zone, twice it was Thomas Müller (minute 27 and 42, with Serge Gnabry once offside), once Robert Lewandowski (46). The ruthlessly correct calibrated line confirmed the wizard’s suspicion every time.

A curiosity in a nice football match in general between the teams of Julian Nagelsmann and Sebastian Hoeneß. It is rare that two teams in the Bundesliga meet who can (or want) to play the ball cleanly over several seasons, so Hoffenheim’s first chances came five minutes later through Andrej Kramaric, whose contract extension until 2025 was announced. shortly before the end. game, chances for Gnabry (volley, 10′), Kevin Vogt (dangerous goal scorer, 12′), Müller (kept strong by Oliver Baumann, 15′), Leroy Sané (Schlenzer, 21′), Georginio Rutter (good scoring position, shot, missed goal, 28.) plus offside goals. As I said: entertaining game.

TSG then logically took the lead after a flawless move. Joshua Kimmich lost the ball up front, but a combination followed with so many players that he can’t be blamed. Christoph Baumgartner kept his foot on a cross from David Raum, who was strong again. Robert Lewandowski scored Bayern’s equalizer from a Kimmich corner, his 29th goal of the season.

After the break, FC Bayern were clearly the better team and had more and more chances, with Gnabry (post, 68) and Jamal Musiala (55 and 69) not taking advantage of their chances. Stefan Posch barely scraped Müller’s shot off the line (73′), Müller complained emphatically about the sleight of hand, but the refereeing team saw no intent in the elbow touch. And that’s right: if you don’t hit the front, you’ll have problems in the back. Only a world-class performance from Manuel Neuer prevented Kramaric from taking the lead again at Hoffenheim (80′). It was the last chance of high class.

Click here to see the Bundesliga table and all the results.