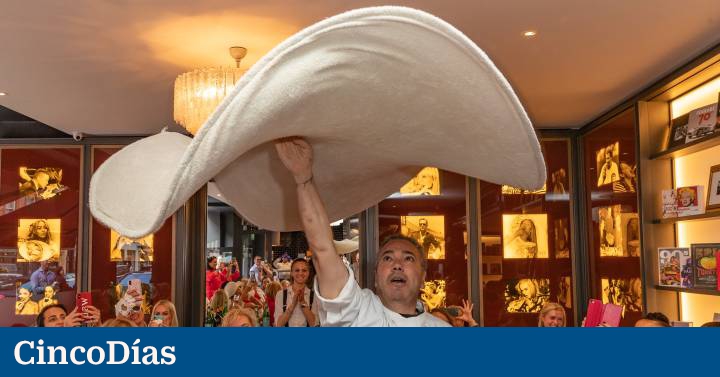 The craziest thing about Crazy Pizza isn’t its name, it’s its prices. A black leg pizza with truffle can cost around €114 at Italian businessman Flavio Briatore’s chain of restaurants, which has a presence in other cities outside Italy such as London, Monte Carlo and Riyadh. Now his challenge to traditionally low pizza prices has opened a war with the pizza makers of Naples, where the preparation of this dish of Italian cuisine is a UNESCO World Heritage Site.

One of the simplest versions of this dish, pizza margarita is usually served for less than five euros in the southern Italian city. “A pizza for four euros?

The tycoon has called Neapolitans who criticize his prices “envious”. “You are jealous, I adore you for giving me great publicity. I’m a genius and you’re not, that’s the difference,” he wrote on his networks.

Instead, the Briatore restaurant’s menu lists a Pata Negra pizza for €65, but customers can pay €49 extra if they want to add black truffle shavings to their plate. The prices go on in this order: a pizza with cooked ham is paid at 29 euros, the rustic one with peppers, eggplant and zucchini costs 22.

Given Crazy Pizza’s high prices, chef Sergio Miccu, president of the Neapolitan Association of Pizza Makers, has accused Briatore of betraying the pizza’s humble heritage. “Pizza has fed generations and conquered war and cholera,” he said in a statement.

For his part, Gino Sorbillo, one of Italy’s most famous pizza makers, decided to serve free pizza outside his family restaurant in central Naples in response to the Italian businessman’s comments. “(Briatore) says cheap pizza isn’t good? That’s how we make it. Try it and tell me how it is,” Sorbillo told RTL radio.

But the chef has raised the tone of the challenge. Sorbillo has suggested that Briatore chefs prepare their dishes alongside Neapolitan chefs for a night “so that their customers, accustomed to gourmet pizza, can try a typical Neapolitan one in healthy competition”.