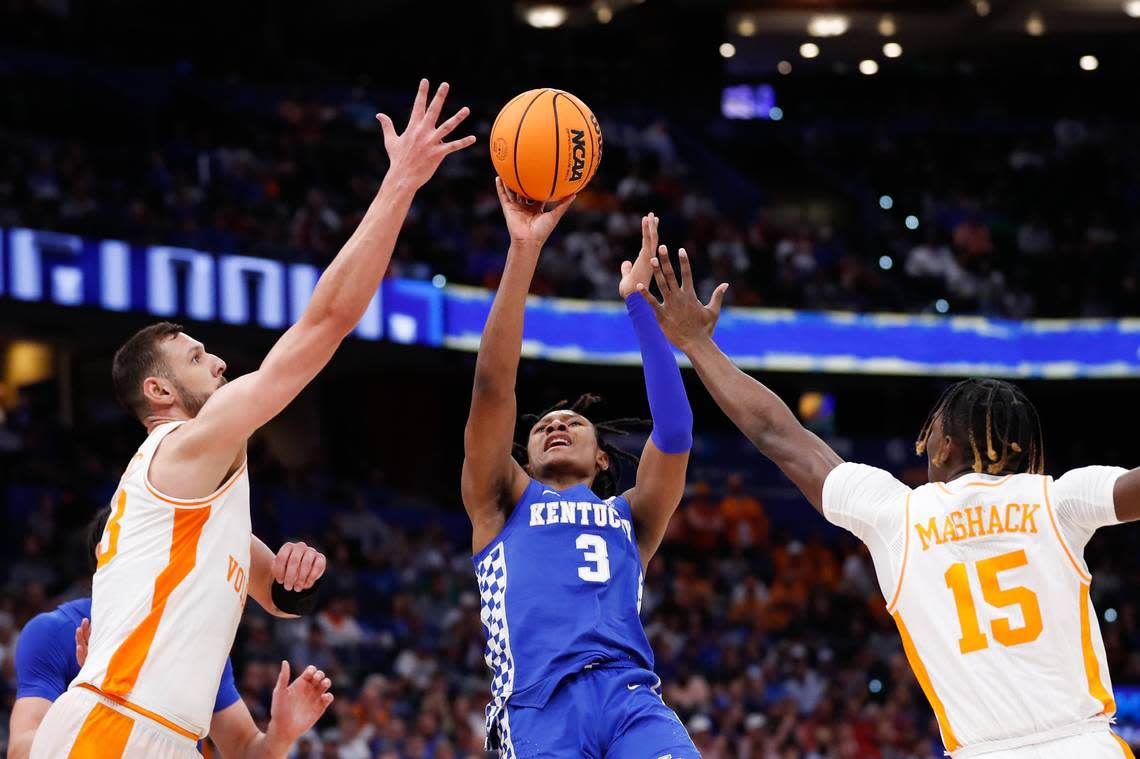 Five things to know from the No. 3 seed Kentucky Wildcats’ 69-62 loss to the No. 2 seed Tennessee Volunteers in an SEC Tournament semifinal men’s basketball game at Amalie Arena (20,500 basketball capacity) in Tampa, Florida. , on Saturday:

1. Rick Barnes has the Kentucky number. With Tennessee’s victory, Rick Barnes is now 10-7 as UT’s leader against Kentucky. Overall, Barnes is 11-9 against the Wildcats.

For the second time in the last four seasons, Barnes beat Kentucky in the semifinals of the SEC Tournament.

The UT boss crafted a masterful defensive game plan that used the depth and length of the Tennessee post to frustrate Kentucky star Oscar Tshiebwe. Meanwhile, Tennessee’s fast backcourt was able to harass the UK on a horrible three-point shot (see below).

Barnes is now tied with Don DeVoe and Wimp Sanderson with 11 wins against the UK.

On Sunday against the Cinderella Texas A&M Tournament, Barnes will attempt to lead UT to its fifth all-time SEC tournament title, and first since 1979.

Power forward Keion Brooks, who gave UK a spark with 19 points and five rebounds, hit Kentucky’s other 3-pointer to go 1-for-3 from behind the arc.

Particularly troubling was Grady’s 0-fer from behind the 3-point line. The Dayton grad transfer fills the role of the UK’s top perimeter threat, so it’s concerning that he enters the NCAA Tournament 5-for-22 from 3-point range in the Wildcats’ last six games.

One wonders if the two-game stretch in which Grady had to run the point and played many minutes while Sahvir Wheeler and TyTy Washington nursed from injuries has affected his shooting.

3. Kentucky and adversity. To UK’s credit, on a day when they couldn’t buy a three-pointer and their best player was hampered by foul trouble and ultimately disqualified, the Cats still clawed their way from 12 down with 3:13 remaining (61-49). to within 65-62 with 1:31 to play.

Still, what seems worrying when weighing Kentucky’s chances in the tournament that really matters, the one sponsored by the NCAA, is how narrow the UK’s margin for error seems this season when playing top teams.

In many of Kentucky’s losses, the Wildcats have lost a key player or two to injury.

On Saturday, the best player in the UK was paralyzed by fouls.

It would be easier to feel better about Kentucky’s chances in the next tournament if the Wildcats had won a few of these games against high-level competition where something important went wrong.

4. Calipari misses out on part of SEC history. With the UK losing, John Calipari’s record in SEC Tournament games fell to 24-6. The loss prevented Calipari from tying former Alabama coach Wimp Sanderson (25) for the second-most wins in modern SEC tournament history (since 1979).

In his first nine SEC Tournaments as Kentucky’s head coach, Calipari led the Wildcats to the finals eight times and to six championships.

In the last three SEC tournaments, the UK has gone 2-3 and failed to advance beyond the semi-finals.

5. Oscar in the UK Book of Records. In what was a frustrating day overall, Kentucky star Oscar Tshiebwe still managed to extend his streak of consecutive games with a double-double to 15 by finishing with 13 points and 11 boards.

Tshiebwe played just 25 minutes due to foul trouble. He fouled with 3:37 left in the game and the UK trailed 58-49.

Saturday’s double-double was Tshiebwe’s 27th of the season, beating Dan Issel (26 in 1969-70) for the UK single-season record.