Final results.. A landslide victory for the “independents” in the Palestinian local elections 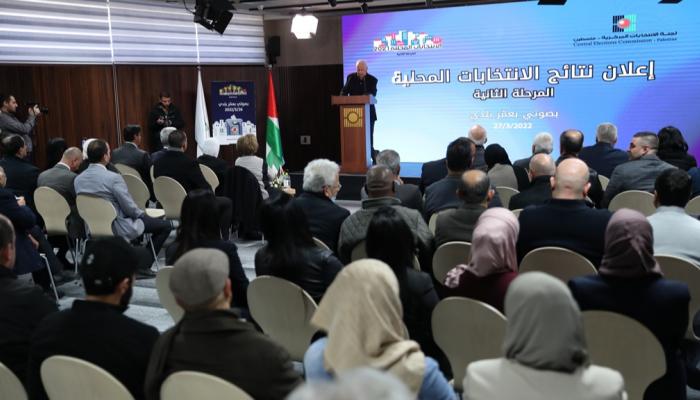 The second round of the Palestinian local elections showed a clear advance for the independent lists, with the popularity of the party lists falling.

Dr. Hanna Nasser, chairwoman of the Palestinian Central Election Committee, said that the final voter turnout in the second phase amounted to 53.69% of the 715,413 eligible voters.

Nasser pointed out in a press conference held at the media center inside the committee’s headquarters in Al-Bireh, that the total number of voters reached 384,000, and the correct ballot percentage of these votes was 97%, and the percentage of white papers was 1% and invalid papers 2%.

He pointed out that the Central Elections Committee met this Sunday morning and analyzed all the complaints and reports presented by the control bodies, since it saw that none of these complaints affected the electoral results, for which it approved the official results of the elections. elections.

He said: “The results show that the percentage of seats won by the independent lists amounted to 64.4% of the total number of seats in dispute, which amounted to 632 seats, while the party lists won 35.6%.” .

He added: “The commission also announced the names of the lists and their undisputed winning candidates in 23 local commissions, in each of which a complete electoral list was nominated.”

The “Fatah” movement ran in the elections within lists called “Construction and Liberation”, which can be deduced from the results obtained in the cities of Jenin, Qalqilya, Salfit, Beitunia and Ramallah.

In the city of Nablus, “Fatah” participated in the elections as part of an independent list called “Nablus chooses” and won 8 seats against the 7 seats of the “Al-Azm” list backed by the “Hamas” movement.

The Hamas-backed “Beer Unites Us” list won in the city of Al-Bireh, and the “Loyalty to Hebron” list won in Hebron.

On the other hand, the independents won in the cities of Tulkarem and Beit Jala, in addition to a large number of towns and villages.

For its part, the “Fatah” movement pointed out that “the results of the municipal elections held yesterday, and their landslide victory, are convincing proof that the Palestinian people have renewed their confidence in the movement, its leader and its national project. ”

He added in a statement that he “hoped that these elections would include all parts of the country”, but that “Hamas” acted with “selfishness and opportunism, and insisted on preventing it in the Gaza Strip and depriving our people there of participating in elections and exercise the rights guaranteed by law.

Fatah considered that “Hamas” gave a dangerous message to Israel by preventing elections in the Gaza Strip and insisting on implementing its separatist project.

The “Hamas” movement prevented the elections in the Gaza Strip due to the failure to hold the presidential and legislative elections that were scheduled for the middle of last year, and the Palestinian Authority postponed them indefinitely after Israel’s refusal to hold these elections in East Jerusalem.

The first phase of the 2021 local elections took place at the end of last year in 154 local bodies from all West Bank governorates without the participation of the people of the Gaza Strip, due to Hamas’s refusal to hold them in both phases.