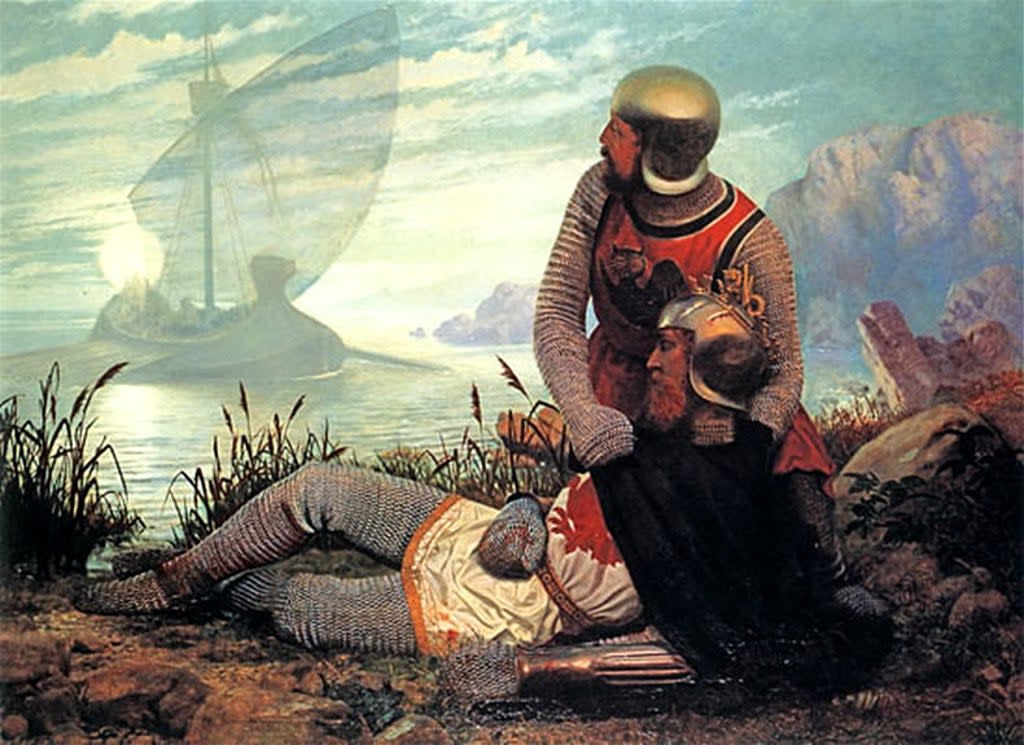 Archaeologists have discovered what are likely the long-lost tombs of as many as 65 British kings and other royals from the era associated with the King Arthur legend.

The discovery is a major advance in archaeologists’ and historians’ understanding of the nature of dark-age society. As research continues, it may also shed crucial new light on the often misunderstood current political geography of post-Roman Britain.

Before the new research, only one final resting place of an indigenous British monarch from that time was known, along with half a dozen other potentially royal tombs.

Most of them appear to date from the 5th and 6th centuries, a time when Britain was a patchwork quilt of dozens of petty kingdoms.

In what is now the east and south of England, a whole series of these small states were ruled by Anglo-Saxon kings of wholly or partly Germanic origin.

These dynasties of mainly or mainland origin had acquired their lands and positions through conquest, marriage, or alliance in the decades following the collapse of Roman rule in Britain around AD 410.

But in the west and north, where there was initially virtually no Anglo-Saxon penetration, the post-Roman royal dynasties that emerged were mainly Celtic (i.e. of native British or Irish dynastic origin).

But, until now, virtually nothing was known about where those dark-age British Celtic monarchs were buried. Although archaeologists had found nine Anglo-Saxon royal tombs, only one definitive indigenous British royal burial site had been identified.

Now new research by a leading expert on that period, Professor Ken Dark of the University of Reading and Spain’s University of Navarra, has succeeded in tentatively pushing the Dark Age Celtic British royal grave count dramatically up. between 55 and 65.

The new discoveries are in Wales, Cornwall, Devon and Somerset. Newly published research suggests they are royal final resting places because they have highly unusual designs that are quite different from and clearly of much higher status than the thousands of other Dark Age British tombs. Indeed, some key examples are associated with probably Celtic royal high-status places, and bear similarities to Irish royal tombs.

Although the names of the monarchs buried in these tombs are not generally known, they appear to have been kings, sub-kings or other royals associated with the British kingdoms of Gwynedd (north-west Wales), Dyfed (south-west Wales) , Powys (central east Wales), Brycheiniog (now Breckonshire), and Dumnonia (now south-west England).

Among the most important tombs, those of probable superior kings have been identified at Caernarfon and on Anglesey (both in North Wales) and near Tintagel in North Cornwall.

Unlike early Anglo-Saxon pagan royal burials, the British (and Irish) Celts did not normally have grave goods.

That’s because the British and Irish Celtic monarchs were Christians (and therefore would generally have regarded the use of grave goods as a distinctly pagan practice, and therefore unacceptable).

Unlike research on Anglo-Saxon tombs, the study of early British Celtic royal tombs is still in its infancy and, as a result, the names of the kings buried in them are not yet known (apart from a burial site where there is a accompanying stone inscription).

However, as research continues, it may ultimately be possible to date the tombs more precisely, or determine whether their occupants were high kings, sub-kings, princes, or princesses. Therefore, associating specific tombs with specific rulers may become theoretically possible at some point.

The tombs, tentatively identified as royal, account for less than 0.1 percent of Dark Age British Celtic burials. They are unique in that most of them have enclosures with rectangular or square ditches around them, and many appear to have had gates and driveways, as well as wooden posts and stone-lined pits (perhaps for commemorative libations). ) within the enclosures. Some of these enclosures, up to 10 square meters, also seem to have been protected by fences or palisades. The tombs were found over many decades, but, in most cases, archaeologists and historians had not realized, until Professor Dark’s recently published research, their likely royal status.

Over the years, popular interest in dark-age Britain has been fueled by the public’s fascination with the mythological or quasi-mythological figure of King Arthur.

However, new research into dark age British royal tombs is unlikely to shed any new light on the most famous (and legendary) “king” of that era.

So far, there is no unequivocal evidence for Arthur’s existence, and accounts of his exploits (written hundreds of years after the era associated with him) do not even refer to him as a king, but simply as a “leader of war”.

However, the discovery of so many royal tombs from the dark ages in western Britain is likely to lead to new research that will at least help further shed light on the so-called Arthurian age (and some of the key sites associated with it), even if it isn’t. It sheds no new light on Britain’s most elusive legendary figure.

“Prior to this work, we were completely unaware of the large number of probable royal tombs surviving in post-Roman western Britain. Ongoing research is likely to help change our understanding of important aspects of this crucial period in British history,” said Professor Dark.

New research on the earliest British and Irish royal tombs is published this month in the Journal of the Royal Society of Antiquaries of Ireland.

- Advertisement -
Share
Facebook
Twitter
Pinterest
WhatsApp
Previous articleDevelopment of a Test of Cognitive Functions in Normal Subjects in Japan, a Rapidly Aging Nation – Article published in the international medical journal Dementia and Geriatric Cognitive Disorders
Next articlePeoples of the world, look at this city