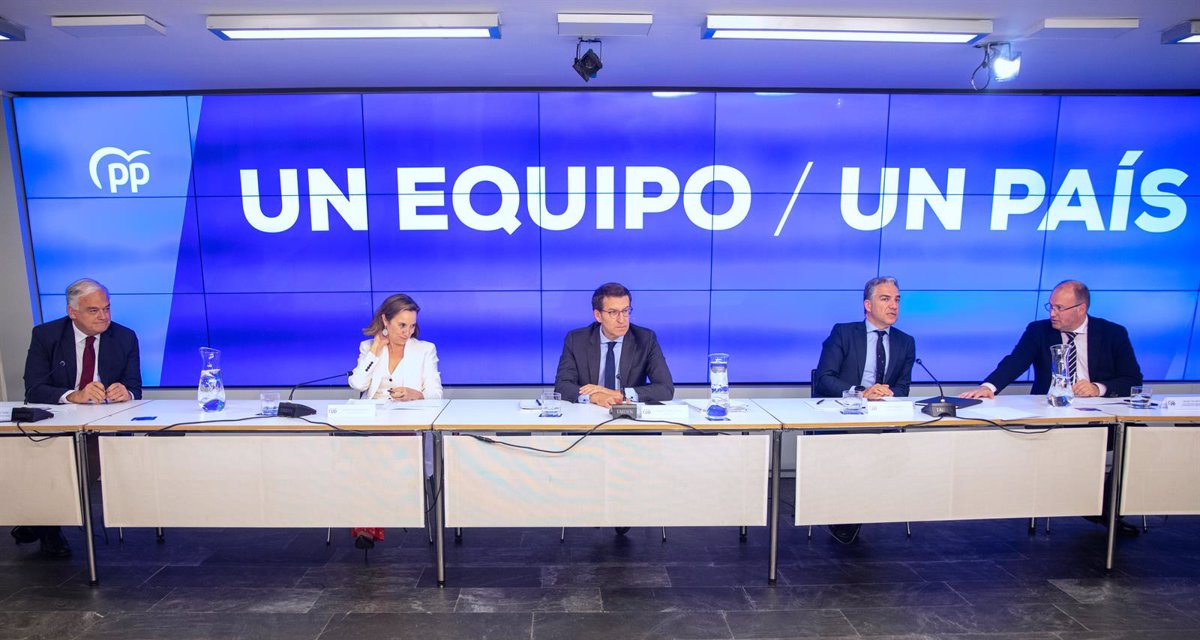 In ‘Génova’, after overcoming their crisis, they boast of unity and warn: “Now the internal crisis is installed in the PSOE”

The leader of the PP, Alberto Núñez Feijóo, will meet this Tuesday with the National Executive Committee of the PP to take stock of the political course and set the priorities of the PP in the face of the “challenges” that Spain will face this autumn, with economic and energy “uncertainties,” party leadership sources have pointed out to Europa Press.

It will be the last executive committee of the PP – bringing together the steering committee and territorial “barons”, among other things – before the August summer vacation, and Feijóo will devote part of his speech to reviewing the pact offers and proposals he sent to Pedro Sánchez and who received no reply. “We haven’t even received an acknowledgment of receipt,” they complain in Genoa.

In an economic key, Feijóo will recall his party’s proposals in the face of the crisis at a time when inflation is at 10.2%, fuel prices continue to skyrocket, the shopping basket continues to grow and the energy situation worsens in the fall to get worse.

In addition to cutting income tax, cutting bureaucratic and superfluous spending and tightening European funds, the opposition leader will emphasize the energy issue after the European Commission’s recommendation to cut consumption by 15% and gas consumption, the government’s refusal to allow them to support.

According to Feijóo, it is “essential” that Spain promotes a “responsible and serious” energy saving plan to reduce “unnecessary consumption” and agrees with municipalities to reduce night lighting, for example, as he explained a few days ago in front of Valencia.

The fires affecting Spain will be another topic to be on the table at a time when the fire has devastated more than 60,000 hectares these days. The PP has defended that the government pre-activates army units to be prepared when forest fires threaten to devastate the population and that European funds are allocated to fire prevention measures.

FIVE MONTHS AFTER THE DEEP CRISIS OF THE PP

Almost five months after Feijóo took office as President of the PP, following a deep internal crisis that has propelled Pablo Casado’s leadership, the Executive Committee meeting will also serve to take stock of the internal situation.

With the wind blowing in the polls – with some even earning him nearly 60 seats above the PSOE – Feijóo has urged his people to be careful and not trust. Of course, in “Genoa” they admit that the elections in Andalusia served to confirm a “cycle change” in Spain.

Three days after the PSOE federal committee, with which Sánchez repulsively tries to breathe life into his government to stop the “Feijóo effect”, the “people” deny that this transformation will serve to get the CEO back because in in his opinion, understand that “the problem is himself”, that he cannot go out on the street.

“Now the internal crisis is installed in the PSOE,” stresses Feijóo’s team, which emphasizes that all the prime minister’s movements seek their political “survival” in the Moncloa Palace.

In addition, PP sources have criticized the chief executive for his constant rotation in government, the Socialist Group and the party executive. “Human capital management also measures politicians,” point out PP leadership sources, who stress that a good chunk of Feijóo’s team has been with him for more than a decade.

Opinions differ within the PP ranks as to whether Sánchez can bring forward the parliamentary elections or not. Some PP officials interviewed by Europa Press believe they can opt for an election “super Sunday” in May to capitalize on the pull of the mayors.

However, other leaders believe the legislature will wear off, especially if all the polls are now positive for the PP and a snap election could take Feijóo straight to Moncloa.

At the moment in “Genoa” they assure that they are “prepared” and these months they will continue to work to build the “alternative” of the PP, since, as they assure, Sánchez will ultimately do what is best for his “choice – and personal interests,” according to the sources consulted.