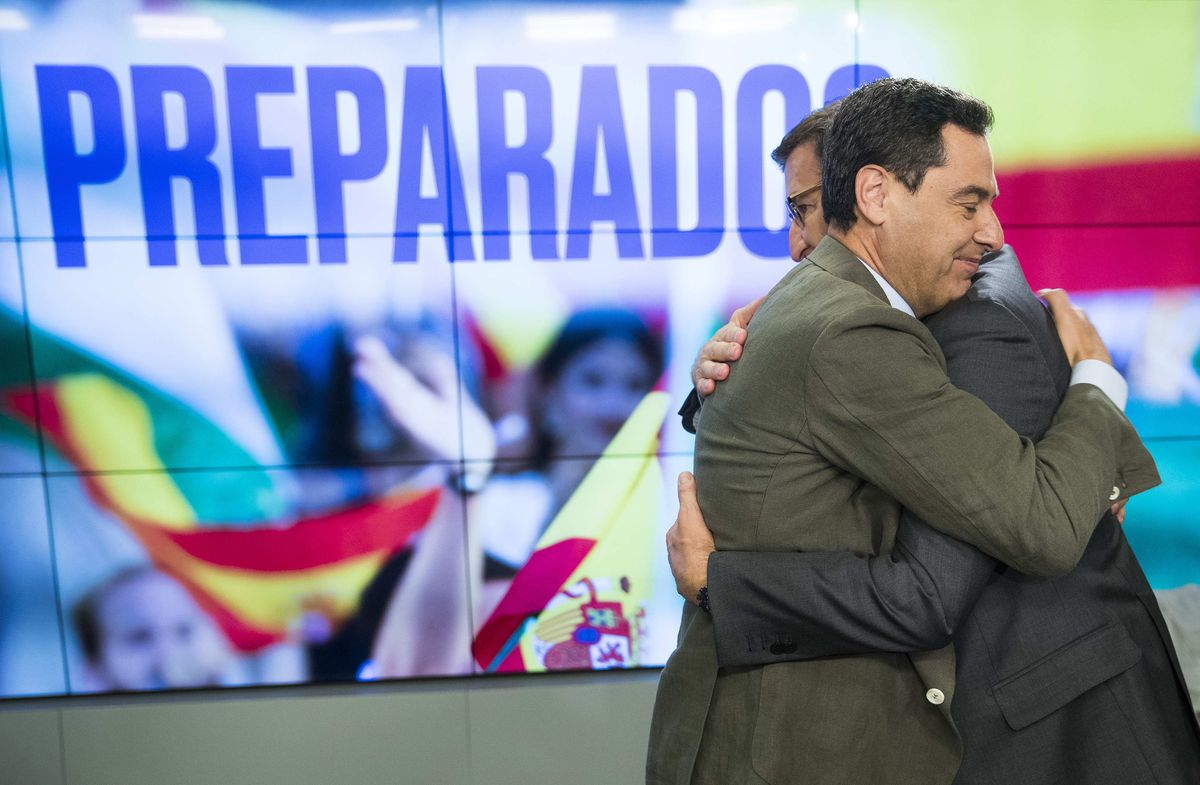 Alberto Núñez Feijóo and Juan Manuel Moreno Bonilla, to the rhythm of Bruce Springsteen’s “Glory Days (Glorious Days)”, entered the session of the National Board of Directors of the PP triumphantly, moving ahead through a parade of applause and pats on the back of the main popular leaders. All with a smile from ear to ear. The PP does not adapt with joy. An absolute majority in this Sunday’s Andalusian elections has given a shot of optimism to the Conservatives, who emerged from a deep crisis and ousted their leader just three months ago, and who now find themselves riding a wave they believe can break them will soon lead to La Moncloa. At the session of the highest body between congresses, the leader of the PP heaped praise on the Andalusian president and congratulated himself on the party’s good course, but has also outlined the path for himself. Moreno Bonilla followed this path in Andalusia, where, according to Feijóo, he achieved “the triumph of moderation”. The PP, the popular president urged his leaders, must “offer an alternative of majorities, focused and ready to give Spain the government it needs”. In other words, you must continue on the Andalusian road, versus the one from Madrid Or what is the same, the eternal journey to the center of the PP.

Feijóo has refused to lapse into “triumphism”, although he believes the PP is well focused. “We’re on the right track,” he told his people. From there, his analysis is that Moreno Bonilla won in Andalusia with a policy based on “dialogue and agreement; in not confronting and dividing. The politics of consensus that does not offend”. According to the PP leader, the political horizon is changing, and now the majority of citizens are demanding this type of moderate policy, as opposed to the policy “that goes from shock to shock”.

For this reason, Feijóo believes that “Spanish politics must return to centrality, to the unification of comprehensive projects”. In other words, the leader calls on the PP to adopt the strategy of moderation in the face of the cultural struggle and the ideological confrontation represented by Isabel Díaz Ayuso. All of the Conservative leader’s messages went in the same direction. “Spanish politics needs more centrality and credibility,” Feijóo repeatedly emphasized in his speech.

The President of Madrid, who was listening to him in the second row, refused when she arrived that her model was paused in the PP. Ayuso defends that these are “complementary” strategies and that the party’s two souls are an invention of the left. “Throughout the campaign, President Moreno and I have defended the same economic model. We haven’t had a single confrontation, on the contrary, we are partners with complementary models. Since Sunday evening I’ve seen how the left is transporting the argument of an alleged confrontation in all media, as if we had a problem. The left has suffered the greatest blow in its history (…) the problem is not with the PP, quite the opposite”. However, it is the Andalusian PP and Moreno Bonilla himself who have insisted since election night that Sunday’s result shows their strategy is on the right track. “The path through the middle is the reference path. It’s the only strategy that stops Vox,” said the Andalusian president the day after his election success.

In the National Council, the star was not Feijóo, but Moreno Bonilla. To the point that a line of leaders has formed to take a picture with him. The President of Andalusia has restored the confidence of the PP to be the large majority party it once was and is treated almost like a hero within the party. “Hey, I’m ashamed…” said the Andalusian before taking the floor after the long standing applause he received from his colleagues. Moreno Bonilla immediately put his victory at the service of political change in Spain and his friend and ally Feijóo. “This is your success,” he told the popular leader. “I think we’re on the right track. We are making progress. But we don’t trust. There will be obstacles, but Alberto has the best project, the best team and the best travel companions, namely those of the PP”.

The PP proclaims the beginning of the end of the socialist executive, while the PSOE claims that the results cannot be extrapolated to general elections, which, if there is no progress, will take place within a year and a half. “The government is strong, there is a legislature to the end,” assured Pedro Sánchez in the socialist federal executive this Monday, according to his spokesman Felipe Sicilia. The President is now preparing new anti-crisis measures to overcome the Andalusian setback. The interpretation of the national leadership of the PP is that it shows the way out of Sánchez from the government presidency.

The political agenda of Catalonia