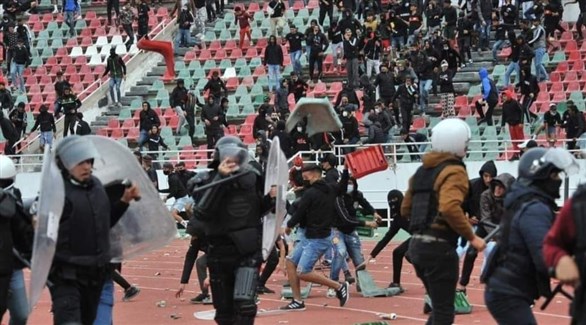 FAR fans stormed the Moulay Abdellah stadium in Rabat, after losing 0-2 to MAF and being eliminated this Sunday in the round of 32 of the Moroccan Throne Cup.

The Royal Army, who have won the title 11 times, most recently in 2009, suffered an early scare when they rocked their net with Aladdin Agray’s seventh-minute header from a corner kick.

The royal army had difficulty translating its control into objectives and missed many opportunities.

Substitute Ayoub Lakhdar fired a shot of mercy and added the visitors’ second goal with a powerful shot after a counterattack.

The end of the match was complete chaos after the fans descended from the stands and stormed the field, just days after the decision to return the fans to Morocco after a long absence.

The avalanche and influx of fans caused the withdrawal of the security forces and the fans damaged the contents of the stadium.

There were some clashes as well as the launching of fireworks with throwing seats and projectiles, and there were some injuries among fans and security.

Subsequently, the Moroccan Directorate General for National Security announced the arrest of 160 people in connection with the disturbances.

Police said in a statement that the security operations “resulted in the arrest of 160 people, including 90 minors, on suspicion of committing sports-related disturbances, possession of knives, public drunkenness and stone throwing, in addition to cause material loss to individuals and the public. property and deliberately setting a vehicle on fire.

According to press reports, 85 police officers were injured.

* Hard-earned victory
In another match, Ittihad Tangiers waited until the fifth minute of stoppage time to narrowly beat their wild card Fatah El Bayda 1-0 in the amateur league, which was the most dangerous of the match.

Ittihad Tangiers’ winning goal came through defender Cheikh Youssef Konate, following a rebound after Axel May and the goalkeeper were challenged.

Raja Beni Mellal qualified for the Round of 16 with a 2-1 victory over Shabab El Massira of the second division.

Shabab Al-Sawalim turned their early delay into a thrilling 2-1 win over neighbors Al Ittihad Casablanca, who compete in the second division.