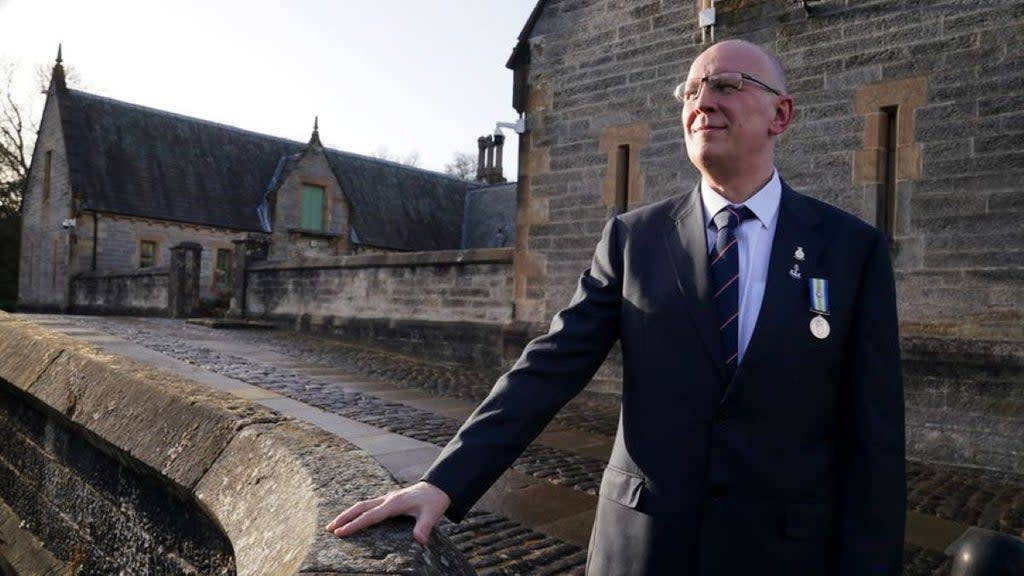 A Scottish veteran has told how the death of his brother in a hit-and-run made him realize he suffers with survivor’s guilt after fighting in the Falklands War four decades ago.

Norman McDade, who prefers to go by Mac, joined the Royal Navy at the age of 17 in 1978 and trained as a chef.

Despite the ship being hit and shelled multiple times, the entire crew miraculously survived the 74-day battle.

But four years after the war, Mac’s older brother Robert, a musician, died on the streets of Glasgow in a hit-and-run at age 25.

How could I go through what I did, get bombed and shot at and yet die?

“We were very close,” said Mac, who lives in Erskine and has another older brother named Jim.

“I couldn’t accept the fact that my brother died just minding his business.

“I was on a gang, and they were unloading some equipment and this guy under the influence went around the corner and lost control of the vehicle and Robert was smashed into the back of the truck.

“How could I go through what I went through, being bombed and shot, and yet he died.”

Mac said that when he was between jobs after the war, he suffered from back problems and would often sit at home and fall into a deep depression.

It was at this time that he went to see a doctor for help.

“We sat down and talked, and then one day the doctor said to me, ‘Don’t you think you have survivor’s guilt because of what your brother went through?’

“Then, years later, after going through therapy sessions, I found out that I was dealing with survivor’s guilt, and it was Robert’s death that made me see that.

“My brother and I were very close, so it was a difficult time.”

Despite the horrors of the Falklands War, Mac said he escaped post-traumatic stress disorder (PTSD), a condition common to those who have fought in the war, and with which many of their surviving comrades.

He said he thinks this is because he is stationed on the upper deck of the ship, so he can see what is going on around him.

“I think a lot of people below deck who couldn’t see what was going on and just heard all these planes making horrible noises overhead caused a lot of people to suffer afterwards,” he said.

“I was grateful to be on the top deck and I didn’t have to do any hand-to-hand fighting because I was out at sea.”

Mac, who now lives in Erskine, said he uses art as a means of coping with difficult experiences from his past.

“I think art is very therapeutic, even if it’s just to distract you from your daily work,” he said.

“I think for people who have PTSD, it’s definitely something that would help.

“It’s something that interests me a lot and helps me remember my experiences more and deal with things.”

Mac, who spent nine years in the Navy, has close ties to the Erskine Veterans Charity.

The organization offers various activities, including art workshops, at the Erskine Veterans Village for those dealing with the impact of war.

Some of Mac’s artwork will be on display at the charity’s annual Art Of Erskine exhibition this year, notably paintings he has done of scenes from the Falklands War.

He also donated some of his paintings to the charity’s Art For Erskine auction, all of which were sold.

HMS Plymouth was one of the first Royal Navy ships to arrive in the South Atlantic for war, along with HMS Antrim and Brilliant.

On April 25, he participated in Operation Paraquet, the reconquest of South Georgia.

Later that day, the Plymouth sailed with the Endurance to the port of Leith, which was still in Argentine hands.

The next day, the garrison commander, Lieutenant Commander Alfredo Astiz, signed the surrender in the Plymouth wardroom.

The Plymouth was heavily attacked by Argentine warplanes on June 8, a day Mac said he and many others will never forget.

It was hit by four 1,000-pound bombs that miraculously failed to explode, but did cause significant damage.

Repairs were carried out overnight and the next day, restoring some of the ship’s capabilities, but it was not enough, so Plymouth had to withdraw to a repair area.

It then returned to shore bombing duties on June 14, when Argentine forces in the Falklands surrendered.