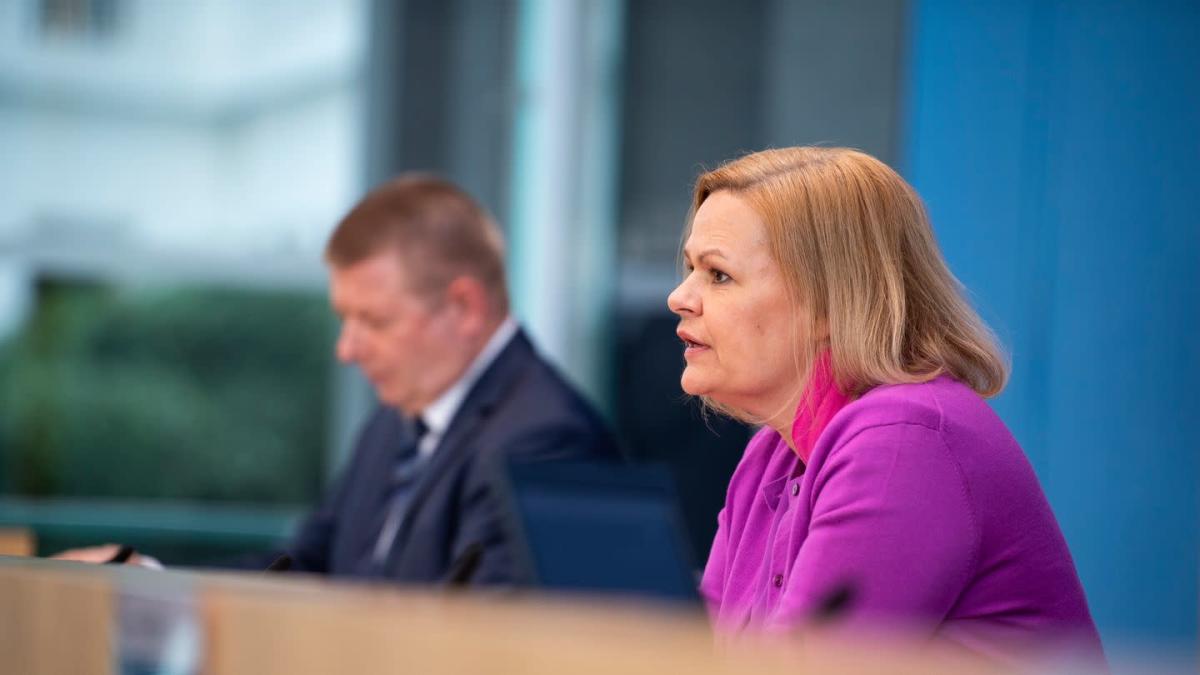 Berlin (dpa) – Right-wing extremists should be disarmed more quickly in future and removed from public service. It is a ten-point plan against right-wing extremism presented by Interior Minister Nancy Faeser in Berlin on Tuesday.

In view of the threat to peace in Europe from Russian President Vladimir Putin’s war of aggression in Ukraine, “we must strengthen internal peace in our country,” the SPD politician said.

Their plan says: “We want to crush the networks of right-wing extremists.” The structures would have to be reviewed more quickly and combated effectively: “to do this, we will clarify and dry up the financial activities of right-wing extremist networks.” Festivals, martial arts events, and clothing sales are important sources of income for stage performers.

To move faster in disarming right-wing extremists, Faeser wants to create a new forum. Here the protection of the constitution, the weapons authorities and the police must exchange information “with the appropriate participation of the administrative courts.” About 1,500 suspected right-wing extremists currently have a gun permit. “That is too much,” said the president of the Federal Office for the Protection of the Constitution, Thomas Haldenwang.

Anyone who observes a “radicalization due to a growing belief in conspiracies” in the people around them should be able to contact an agency in the future to help them deal with those affected so that they “ideally start a deradicalization process” . This advisory service will be created in cooperation with non-governmental actors. The Federal Office for the Protection of the Constitution should also offer help to people “who want to break away from the environment of organized conspiracy supporters such as Corona deniers and need support.”

Within a year, an “Alliance for the Protection of Municipal Representatives” will develop proposals to improve the protection of those affected who are exposed to hostilities and attacks. In addition to the federal states, this alliance must also include municipal coordinating organizations and local politicians.

“The fact that the overlap between right-wing extremism and conspiratorial ideologies should in future be more in the focus of the security authorities is a correct announcement,” said FDP parliamentary group deputy leader Konstantin Kuhle. However, important coalition projects are not included in the action plan. For example, the traffic light parties agreed to legalize the joint center against extremism and terrorism (GETZ) of the federal and state governments.

Under the impression of several right-wing terrorist attacks, the last cabinet of Chancellor Angela Merkel (CDU) decided in November 2020 on an 89-point plan against racism and right-wing extremism. Among other things, it provided for the strengthening of political education and prevention programs, as well as public service campaigns to recruit people with a migration background. Faeser’s predecessor, Horst Seehofer (CSU), had the security authorities produce a national situation report on right-wing extremists.

As Faeser explains in his plan, a new management report should be available this month. There is still a lot to do here, Haldenwang said. Faeser announced that the report should also be gradually extended to the entire public sector.

It is good that Faeser has decided to “break with the tradition of looking the other way,” said left-wing national politician Martina Renner. “It is now necessary that the announced measures be implemented quickly and consistently.”