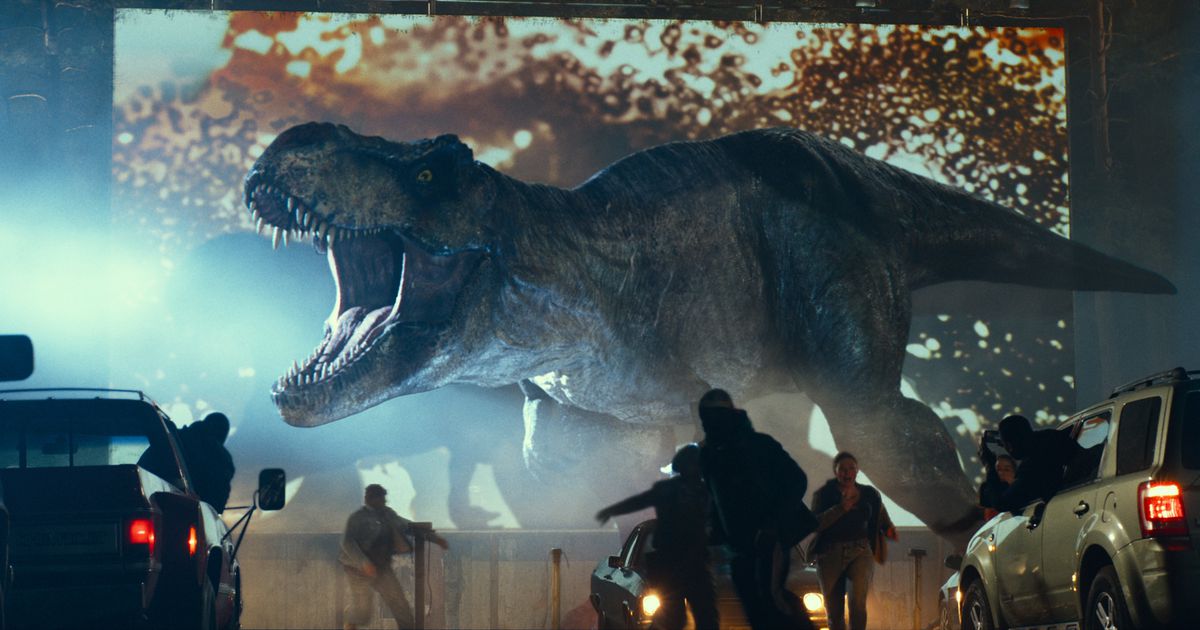 I don’t know if you’ve seen the last of the saga of jurassic park, but I recommend it. You can’t take your eyes off the screen for a second. You will see herds of Parasaurolophus running across vast plains while Owen Grady rides beside them trying to lasso them. You will see specimens with beautiful plumage gliding on the ice and velociraptors chasing motorcyclists through narrow streets. Fast-paced action moments that coexist with the poetic slowness of other scenes, such as that of the dinosaurs crossing the savannah in the midst of a herd of elephants. The problem is that by the end of the film, they’ll realize that he practically didn’t count anything. It’s a hollow narrative that consists of filling every second with information and emptying it of meaning. One might think the film is just plain bad, but I would argue that this narrative shift isn’t just about the dinosaurs. On the contrary, I believe that a new paradigm is invading us that invites us to tell (and tell ourselves) with a spectacular and devastating narrative.

Namely, I contend that this new genre that we could call result narration It not only penetrates to the core of the soul of series and films, but also to the core of our intimacy. In the sagas it is very clear how over the years (or the seasons) the story (and thus the ambiguity of the protagonists) fades to give way to a spectacular orphan of meaning. All in all, the result of the production is impeccable, the thing pleases and works, that’s how it is judged today that a story is worth telling. However, the viewers (readers or listeners) gradually cease to function and understand. And no, this problem is not typical of the so-called “action cinema”. For example, we saw how the last Batman (directed by Matt Reeves) eschewed action in favor of creating a sort of virtuoso darkness. Three hours of darkness, shadows and red fire with exquisite photography and perfect post-industrial decadence. The result? A masterful film, but overbearing where it tries to be profound.

because the result narration forgets that the meaning of a work is not made up of the individual sum of its parts. In fact, you can connect perfect, coherent and spectacular seconds in a row and end up hollower than you started. That’s what happened to a lot of us in the final season of the show euphoria in which we saw the storyline and depth of many characters fade while we couldn’t stop celebrating the series. We quickly understood that they wouldn’t tell us as much as they did in the first season, but it was worth following the music, the make-up, the drugs and each of the intriguing visuals. The meaning faded, and yet the result was still “working”. It may actually work better for some precisely because of their anomie. Not to mention the latest James Bond film, which is perhaps the most coherent and perfect film in the “genre of outcome” because it takes its emptiness to its ultimate consequences and endings (so they say spoiler) kills 007 himself. Here the director wants to see everything and give us everything. The logic is simple: when I imagine it, I record it, I say it, I write it… And we, attentive viewers, really feel that they give us everything while our hearts grow hollow.

Incidentally, this way of counting from a collection of perfect moments has been generalized by social networks, where each shared moment is measured by the result likes and comments, it is not for nothing that the meanings of “Instagram” and “instantly” are almost synonymous at this point. And from the same networks, the narrative of the result has inherited its main goal, which is not so much to tell what deserves to be told, but to produce content that works. And functioning here means holding the viewer’s attention one second longer. Because deep down, this new narrative strives to be as addictive as TikTok, even if the price of addiction is futility. Thus, watching a film (or writing a book, or telling a story…) becomes a way of weaving together scenes with as much virtuosity as possible, but without reaching any meaning. The reasons for this change are essentially technological in nature. Indeed, if the meaning narrative was typical of the printing press, that of the result is that of the Internet. Sam Neill, the protagonist of both the first and last films in the dinosaur saga, gave us an interesting clue, explaining that “in Jurassic Park All the sets were natural, whereas now on set there’s just green screens all around you.” In practice, this means an unprecedented change in story, as technology eliminates the need to choose materials for those who will be telling a story. A Velociraptor chasing a motorcycle and one stumbling among elephants on the savannah “cost” practically the same if the director has the right technology. So why choose? Scene selection has been replaced by the accumulation of images that can create a hypnotic effect, and sometimes not even that. Sometimes the only reason one scene follows another is because it might just be. Wouldn’t it be nice to see elephants walking through the savannah with dinosaurs? Well, let’s do it! Why? Because we can!

Obviously, whoever can do the most is whoever has the most money (and technology), and therefore the result narration it prevails in the highest-budget works, which is why the North American film industry is making worse and worse movies and spending more and more money. In any case, to the extent that the narrative leap is technological, it is to be hoped that the power of storytelling will be transferred to machines or algorithms sooner rather than later. History will no longer be written by who has the necessary authority or legitimacy, but by who has the money. And if you have the money, you don’t have to tell stories or want to make sense. Overall, what for? Will a narrative that makes sense yield better results than one that doesn’t make sense?

The problem, as I said at the beginning, is this result narration it eats up all of our lives in bite-sized chunks. Because technology has also changed the story we tell about ourselves. For example, let’s imagine how often we will take a photo from our cell phone this summer. Most of us will take many pictures, hundreds of snapshots that will weigh us down smart phone like a garbage bag in our hands. Photos of food, swimming pools, friends, family, of our children from behind (if we publish them on networks), of the little ones from the front (if we ever made an album…), of the sea, of sunset, of dawn , a map to remember, a restaurant, a hand, a video of the landscape from the car, another of a kiss that we will give, not to fill another mouth but to collect another selfie , or the photo of the squid that we discovered with our nephew. When we take photos we don’t know if the moment matters or if it makes sense for us, but we will try to make the result spectacular. We’re going to spoil each of these frames, we’ll edit them sometimes and share some to see if they really “work”. Until one day, in a few years, Google or Apple will come along and make a video of our memories for us, play royalty free music for it and suggest that we check out the album that an algorithm will have titled July 24th, days at the beach either Trip to Majorca. The algorithm won’t tell our story (because it can’t), but it might make us cry. Thus, the narrative of the result applied to life itself would be as if at the moment of death, just as life is about to pass us by, the choice of scenes is made by a robot determined to convince us that we are completely unreasonable.

Our old narrative, like the beautiful dinosaurs galloping through theaters this summer, is on the brink of extinction. Some will say that there was never any purpose because at the end of every life death awaits us impassively. I’m saying if I’m going to die out as a dinosaur, I’m choosing to be one of Terrence Malick The Tree of Life. And that in the kitchen of the oracle of matrix You could read the sentence temet nosce (Know thyself written in Latin). He was there to remind Neo that self-knowledge is the only way to reach a higher level. And that’s what I wish you for this summer, that you pass the level. Whatever the dinosaurs, Batman, the Google algorithm, or James Bond himself say, we deserve some sanity. And silence.