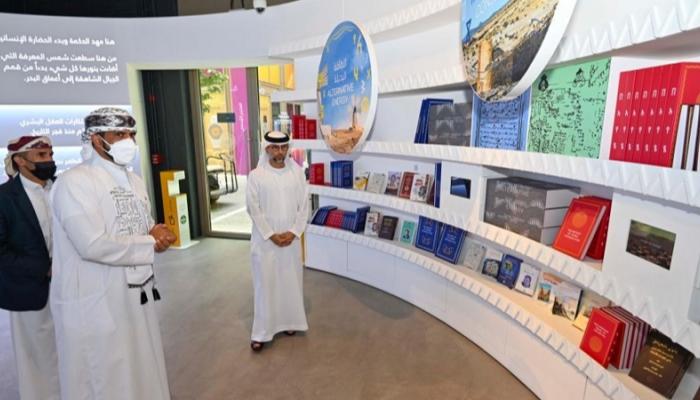 He heard an explanation from the officials of the pavilions about the various participations of their countries and the offers, solutions and sustainable initiatives that they presented, reflecting the remarkable progress they had achieved in various fields of development.

The Minister of Energy and Infrastructure began his tour by visiting the Peruvian pavilion, where he learned about the history of Peruvian civilization, which is one of the most important civilizations that produced a cultural heritage with highly visible effects, and the popular culture of South America that the visitor discovers through the design of the pavilion inspired by the traditional costume, a “Peruvé” cape fabric, famous for its artisan weavers.

The Peruvian pavilion provides a different experience to visitors to Expo 2020 Dubai, helping them to enjoy the landscapes and tourist attractions of Peru through audiovisual media, as well as introducing them to the different aspects of artistic and cultural life, and seeing the diverse sample of agricultural, marine, animal and vegetable products that make up the country’s diversity rich in biology.

Peru’s participation highlights a modern, optimistic and forward-looking country that enhances its competitive advantages and the central role it aspires to play on its way to achieving the sustainable development goals.

The pavilion shows visitors the culture and nature of the picturesque Republic of Peru and the promising opportunities that the country has in the trade, tourism and investment sectors; It has a lot of potential to expand and strengthen trade relations with the United Arab Emirates and the countries of the Gulf Cooperation Council.

The various products of Peru have managed to position themselves in international markets, in light of the package of trade agreements that it signed with more than 50 countries in the world in 2021, with an economic value of $56 billion; It is ranked as one of the Latin American countries that achieved the highest export growth rates, in particular thanks to its enormous biodiversity.

Envisioning the future of Yemen

At the Yemeni pavilion, “Suhail Al Mazrouei” was briefed on the aspects of civilization that Yemen is famous for, such as architecture, agriculture, science, culture and others, and its sustainable development goals based on in the traditions of history and antiquity. civilizations, and their ambitious initiatives capable of foreseeing the future. The pavilion consists of 7 areas, including Yemeni manuscripts and sciences. Various fields such as arithmetic, geometry and architecture, which witnessed remarkable development in ancient Yemen.

The Yemen pavilion is located in the sustainability area, where the participating Yemeni team, led by researcher and mathematician Manahil Thabet, raised the slogan “Descendants of Saba” to embody the depth of civilized and human history.

The “Descendants of Saba” pavilion provides an opportunity to understand the infinite power of knowledge, as it will reveal one of the oldest human civilizations, as well as discover more about Yemeni coffee beans and enjoy the experience of smelling their wonderful aroma.

The world will also know the art of recycling material and spiritual values, from what is known and witnessed in the tall cisterns of Aden, the towers of mud houses in Shibam Hadramout, the art of rationalizing and using water in agricultural terraces of the mountains, and the next irrigation systems that extended over thousands of kilometers in the fertile historical valleys of Yemen, and the arts of Dealing with the marine economy and other evidence.

Venezuela.. A renewable economy in the spirit of nature and digitization

The Minister of Energy and Infrastructure continued his tour by visiting the Venezuelan pavilion, which is located in the Jubilee area of ​​Expo 2020, and combines classical art museums with integrated museums with state-of-the-art technology, in which the natural resources of Venezuela, the projects and interests of Venezuela. Venezuelans related to making the future of their country, as they learned about Venezuelan civilization and culture, in addition to its natural features, including its waterfalls in the tropical forests, and the most famous Angel waterfall in the country, it is considered one of the highest waterfalls. in the world. 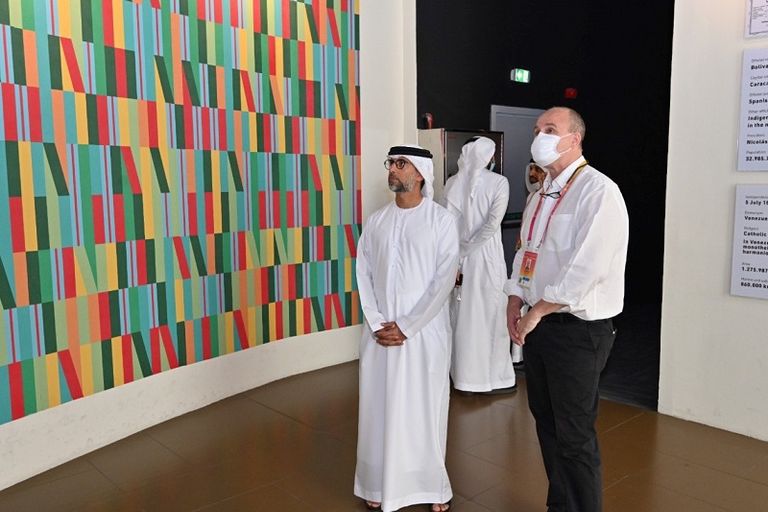 And Venezuela established its pavilion at the Universal Exhibition, with a work that contains an element of movement, by its famous plastic artist Carlos Cruzes.

Inspired by the houses of the Yanomami Indians who live in the tropical forests of Venezuela, a team of architects designed the pavilion’s structure, which are large ring-shaped “chabuno” huts.

The organizing team endowed the pavilion with cabinet compartments, where some exhibit physical art sculptures, while others display integrated artworks with small screens.

Venezuela is among the top 15 countries in the world for renewable freshwater resources and is one of the world’s largest oil exporters.

Venezuela has rich resources of gold, silver, diamonds, and rare metals such as coltan and cobalt, which are used in the preparation of corrosion-resistant alloys.

Famous for grouper and perch, the country is the most diverse fishing nation in South America, with 1,711 species of fish, including 929 freshwater species.