Expo Dubai .. Ohoud Al Roumi in a rich visit to the pavilions of Jordan and Uganda 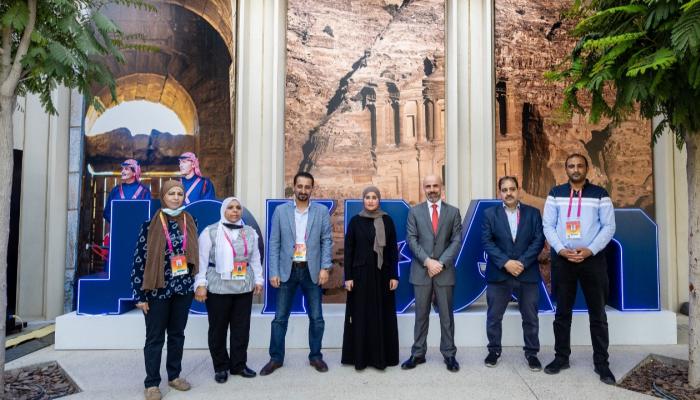 Ohoud bint Khalfan Al Roumi, Minister of State for Government Development and the Future, visited the pavilion of the Hashemite Kingdom of Jordan at Expo 2020 in Dubai.

Located in the mobility zone, which carries the thresholds of the future as a watchword. He also visited the Republic of Uganda pavilion, which is located in the Opportunity Zone and bears the slogan “The Right Place, The Right Time.”

During her visit to the Jordan Pavilion, the Minister of State for Government Development and the Future familiarized herself with the future plans of the Kingdom and its most important features, historical sites and achievements, including the first Jordanian mini-satellite that was designed and built entirely by Jordanian university students, in addition to Jordan’s message of peace, which is a personal message recorded by the Crown Prince of Jordan to visitors to the Jordanian youth pavilion, highlighting the importance of work for global success and achievement . peace.

Ohood Al Roumi praised the distinguished experience that the Jordan Pavilion provides its visitors and the innovative way it takes in presenting the Kingdom’s history and future aspirations in various fields.

During the visit, Ohood Al Roumi learned about the Kingdom’s civilization and history, and its strategic location, which is a link between the countries of the Levant and the Arabian Gulf, and the pavilion’s designs and artworks that combine architecture, media art and products created by Jordanian artisans, and the experience of a journey through Jordan, presented through reality technology.

Ohoud bint Khalfan Al Roumi also visited the Republic of Uganda pavilion, where he was informed about the information and exhibitions it offers, which reflect the cultural and artistic aspects and the aesthetic and natural heritage of this African Republic, and the promising opportunities economic and investment. , in various vital sectors including tourism, transport and logistics services, trade and agriculture, and learned about the experience of Uganda, which is one of the fastest growing and emerging economies in Africa, with 6.5 billion barrels of oil reserves. , in addition to 500 billion cubic feet of natural gas, which constitutes rich investment opportunities.

Ohood Al Roumi praised Uganda’s great and important role in further developing emerging markets and the investment opportunities it offers backed by strong incentives for investors, including tax breaks and facilities that help promote economic growth, its efforts to attract investment to about 79 projects. in various development sectors, and his initiative to provide investors with the opportunity to obtain an investment license through his pavilion at the Expo in just one hour.

The Minister of State for Government Development and the Future was briefed on the products displayed in the pavilion, including Ugandan coffee and wildlife. The Ugandan pavilion links different eras, times and places with each other and reviews the most outstanding tourist attractions and nature reserves. , as well as tourist resorts, mountains and national parks, reflecting the distinguished geographical location of Uganda, which is located in the Nile basin, and owns 45% of the area of ​​Lake Victoria, which ranks as the second largest freshwater lake largest in the world.

Projects exhibited by the pavilion include the development projects of Uganda Airlines, the construction of the Kabale Hoima International Airport, the Albertine Interregional Road Network, the National Trunk Network Project, the Isimba Power Station and other projects related to mineral processing. and the phosphate industry, the manufacture of medical equipment, the development of agriculture, and the discovery of livestock and fishing. And other fields and bounties in which Uganda abounds, and offers its visitors the opportunity to see the most outstanding images of the modern and ambitious African continent, which coexist with mountain gorillas. in their natural environment, and see the most important and rare types of animals and birds that live in Uganda, in a picture that reflects the size of the country’s enormous animal wealth, which includes around 10% of the total number of birds in the world. world .