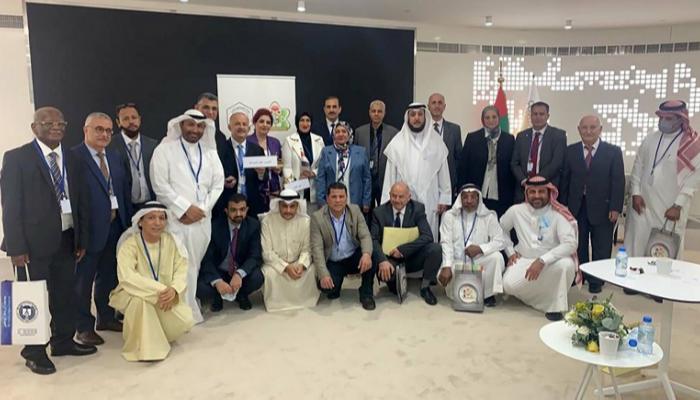 The Fazaa Pavilion of the Ministry of the Interior at Expo 2020 Dubai hosted the general meetings of the 40th session of the Supreme Council of the Union of Arab Chemists.

The activities of the meeting began with Moza Al Shamsi welcoming the participants, whereby the President of the thirty-ninth session of the Council, Professor Zaid Al-Othman, President of the Saudi Society of Chemists, began to approve the quorum for attend. extended his thanks and appreciation to the member associations and unions, expressing his pride that the UAE is hosting the gathering in the middle of the Expo, the only global event in Dubai, to hand over the chairmanship of the Federation to the Chemical Society. time, is headed by Professor Moza Al Shamsi, the current president of the Federation of Gulf Chemists.

The members of the Supreme Council, the “General Secretariat of the Union”, discussed and approved the administrative and financial reports, and viewed the activities of the last session, the most prominent of which was, in light of the Corona pandemic, the end of the chemical cultural season, which includes 25 specialized chemical talks in various fields of chemistry, all remote, with the participation of all the members of the member associations and unions.

The General Secretariat of the Union thanked the Chemical Society of Mauritania for organizing the International Chemistry Conference.

The meeting praised the efforts of the union’s media committee headed by Noura Al-Hammad, a member of the Kuwait Chemical Society, in creating social media accounts, media coverage and preparing the union’s website. .

Dr. Alaa Attia, Chairman of the Board of Directors of the Egyptian Chemistry Scholarship Association, the latest association to join the union and which was announced last July under the umbrella of the Ministry of Social Solidarity, revealed that the association provides experts and consultants in all chemical sciences, organizes links between the graduates of the Faculty of Sciences and the factories, trains them in it, obtains the necessary knowledge and prepares them for the market Work and implement applied research in factories and introduce in them the idea of ​​preserving the environment.

Dr. Hassan Abdel-Gawad Hassan, member of the Board of Directors of the Egyptian Chemical Society, invited the members of the Supreme Council to attend the Fifth International Conference, which will be held by the Society in the city of “Marsa Alam” in the Red Sea coast in the Arab Republic of Egypt in the period from October 11 to 14 this year in cooperation with the British University entitled “Chemistry and global challenges”.