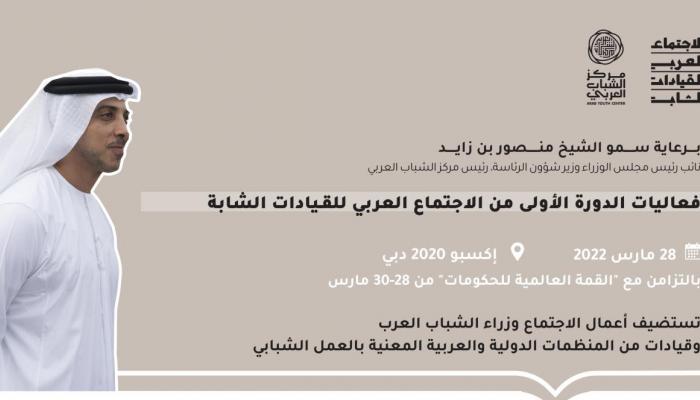 The “Arab Gathering for Young Leaders” activities will be launched on Monday, March 28, 2022, as part of the World Government Summit at Expo 2020 Dubai.

The meeting is patronized by Sheikh Mansour bin Zayed, Deputy Prime Minister and Minister for Presidential Affairs of the United Arab Emirates, Chairman of the Arab Youth Center, and is organized by the Arab Youth Center with the support of the League of the Arab States and the General Secretariat. of the Cooperation Council for the Arab States of the Gulf, and with the participation of Arab youth ministers, youth work leaders and relevant regional and international organizations.

The meeting will discuss the prospects for developing joint Arab youth action and developing its policies, strategies, initiatives and programs based on the ideas, visions and aspirations of youth for the future.

The work of the Arab Meeting for Young Leaders will also welcome leaders, experts and personalities from international and Arab organizations interested in working with young people, while the opening speech of the meeting will be presented by the League of Arab States, which supports the activities of the first meeting of its kind and forms the permanent umbrella for activities related to the empowerment of Arab youth and is supported by the General Secretariat of the Cooperation Council for the Arab States of the Gulf.

The work of the conference culminates in an Arab youth ministerial seminar which brings together Arab ministers with a group of young people from different Arab countries to shed light on the national and Arab contexts of the youth work sector and to raise questions concerning youth work. In addition to topics of interest to Arab youth such as education and job opportunities. The session will allow all Arab ministers to answer and comment on youth questions with the aim of bringing youth closer to youth work agendas in the Arab world. and unify Arab efforts in the youth work sector. 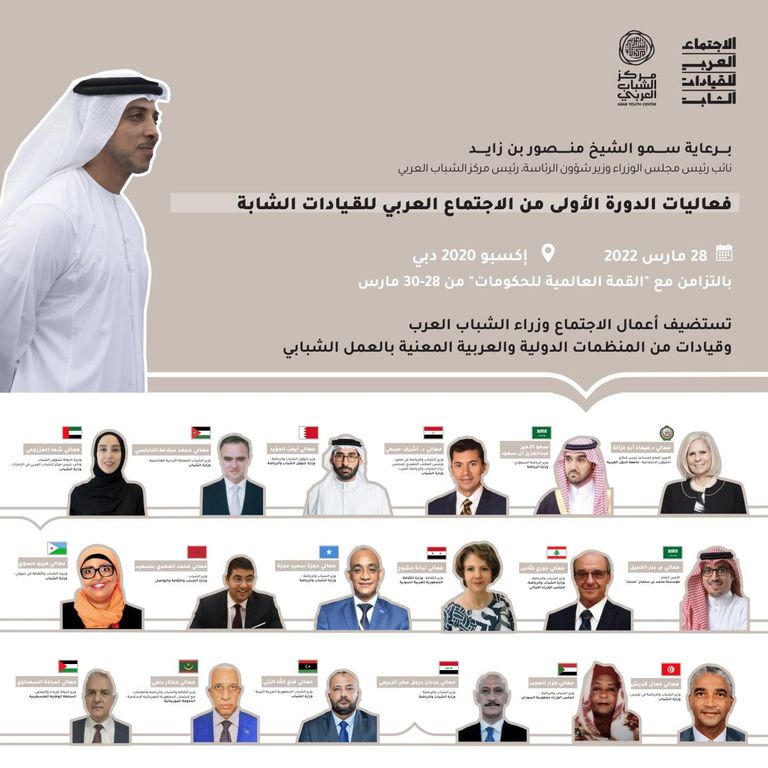 Sheikh Rashid bin Humaid Al Nuaimi, Chairman of the Ajman Municipal and Planning Department, President of the Emirates Football Association and Vice President of the Arab Youth Center, will deliver a speech at the ministerial seminar highlighting the most highlights and possible steps for Arab countries. youth.

The work of the Arab Meeting for Young Leaders is witnessing a series of strategic presentations by leaders of Arab institutions concerned with youth strategies and policies in various Arab countries, on best practices, experiences and policies in Arab youth work. , since they focus on good practices in working with young people and the development and implementation of youth policies.

The meeting also includes a main session on empowering young workers and developing the skills and abilities they need to achieve the desired career development for workers in this sector.

Products of reports and studies on youth

In addition, the Arab meeting for young leaders is witnessing the presentation of the results of the “normative study of the best youth policies in the world with a focus on the Arab region”, which presents clear criteria for what can be considered a national pioneer policy in the youth sector and identify the best globally and in the Arab world with the aim of learning lessons and transferring knowledge, and setting standards for different governance models for the youth sector, and identifying the best globally, with a focus on Arab models in this context and the Emirati model in particular.

At the Arab meeting for young leaders, the results of the study “Challenges of Arab Youth Action” are presented, which evaluates the reality of Arab youth and the prospects of transforming their challenges into opportunities to make their results available to decision-makers decision makers and youth policy makers in the Arab world and inform them about what young people want and the broad dimensions of their role in various fields Developing, building and realizing strategic visions for Arab countries. In addition to specialized guides on the most outstanding youth initiatives and institutions in the Arab world.

The Arab Youth Leaders’ Meeting will feature artwork by Arab youth and video presentations highlighting qualitative programs and initiatives launched by institutions related to Arab youth work, such as the Arab Youth Center.

Speaking at the meeting, Shamma bint Suhail Al Mazrouei, Minister of State for Youth Affairs in the United Arab Emirates and Vice President of the Arab Youth Center, said: “There is always a need to strengthen joint Arab action in the field of youth to coordinate Initiatives, programs and projects of young Arabs so that they integrate with each other and return In this context, the convening of the first Arab meeting of young leaders with high Arab participation at the ministerial level comes to support the development of youth policies Arab and weave a network of joint Arab cooperation to further involve young people in the paths of development and achieve the future goals to which our Arab countries aspire in their strategic visions for the coming decades”.

He added: “Our goal is to provide a comprehensive framework for Arab youth initiatives that stem from the aspirations of young people to achieve their ambitions, open up new horizons for them, develop programs that reflect their needs and interests, and take their skills to new levels.” . that enhance their competitiveness, presence and contribution alongside their peers in various fields and arenas on the global stage.”

Recognize the strengths of young people

In turn, Saeed Al-Nazari, Director General of the Federal Youth Foundation and Strategy Director of the Arab Youth Center, confirmed that the Center is organizing the founding session of the Arab Gathering for Young Leaders to form a platform magazine for Arab youth. action leaders and decision makers will meet with groups of Arab youth from various disciplines to closely identify the points The power of youth and opportunities for improvement available to Arab youth work institutions, and the meeting will constitute a unique platform which will bring together Arab youth action leaders and decision-makers with Arab youth groups to form an Arab team specialized in youth empowerment.”

He added: “Hosting the Arab Gathering for Young Leaders in the UAE and Expo 2020 Dubai World Expo is a quintessential Arab station at this event, which hosted more than 190 countries, and convening the first such gathering within The work of the World Summit of Governments represents a qualitative starting point that coincides with the international event, which welcomes thousands of participants from all over the world.

The Arab Gathering for Young Leaders

The Arab Youth Center organizes the activities of the first session of the Arab Meeting for Young Leaders from March 28 to 30, 2022 at the “Expo 2020” site in Dubai, in the United Arab Emirates, in conjunction with the “World Government Summit”, and in the presence of Arab leaders, officials, international organizations and institutions interested in youth work and its programs. 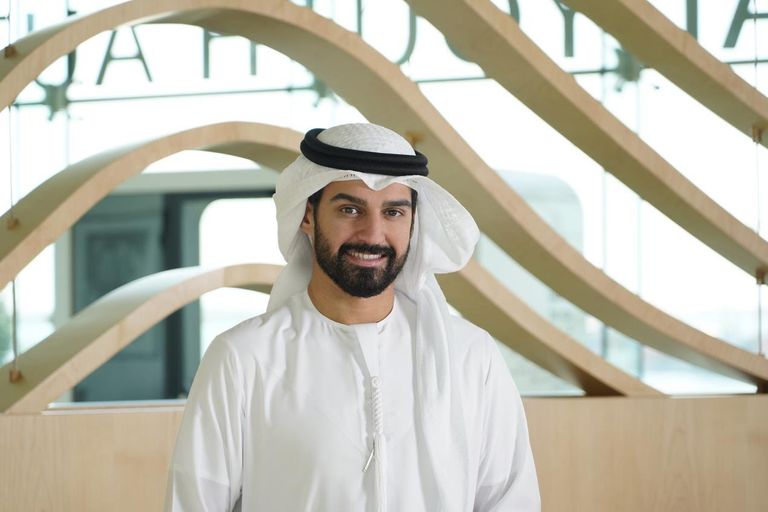