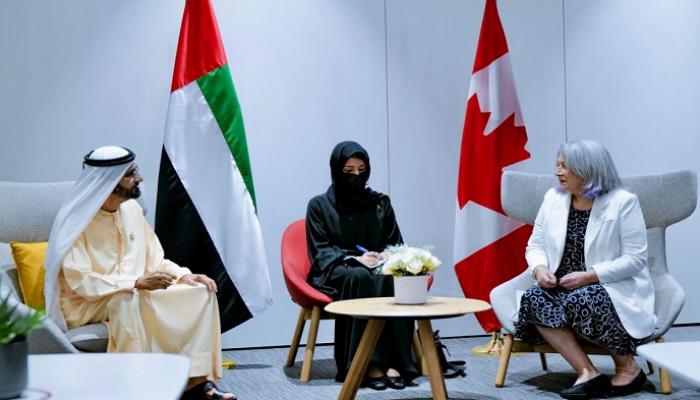 Sheikh Mohammed bin Rashid Al Maktoum, Vice President and Prime Minister of the UAE and Ruler of Dubai, received on Friday Marie Simon, Governor General of Canada, who is currently visiting the UAE to participate in her country’s celebrations for National Day at Expo 2020 Dubai.

During the meeting, which took place in the Canadian Pavilion at the Expo, Sheikh Mohammed bin Rashid Al Maktoum welcomed Marie Simon and her accompanying delegation.

The two sides reviewed the overall bilateral relations and the continuous positive development they are witnessing at all levels, especially the economic and cultural levels, and ways to enhance the partnership between the two countries, especially in the field of trade and development. investment exchange. to new heights it serves the interests of both peoples.

According to the Emirates News Agency, the discussion touched on the significant positive impact of Expo 2020 Dubai at the regional and international levels, paving the way for greater rapprochement and cooperation between peoples, resulting in the UAE approach to spread the causes of peace and coexistence. and promote joint action in order to create a better future in which all nations and peoples can enjoy the causes of good, prosperity, prosperity and progress.

thinking in the future

For her part, the Governor General of Canada praised the high level of organization that characterizes this edition of the Expo, highlighting that Canada’s participation under the slogan “Thinking about the Future” in this important world forum allowed to shed light on a series of of its main sectors that it sees It has a wide space for cooperation and partnership, including artificial intelligence, robotics, education, digital transformation, telemedicine, clean technology, agriculture, health sciences, space and other areas that focus on creating a better future for humans, which is in line with the objectives of the Expo.

In addition, His Highness Sheikh Mohammed bin Rashid Al Maktoum toured the Expo, during which he visited the pavilions of several participating countries, including the Philippines, Portugal and Venezuela, as well as the Dubai Electricity and Water Authority pavilion.

He was informed about the elements of their cultural and civilizational distinction that the three countries were exposed through the Expo, and the investment opportunities that they promote and the areas of economic cooperation, in addition to presenting their social heritage within this world forum, which brings together pavilions representing 192 countries from different continents of the world that meet in Dubai Everyone has one goal: to create a better future.

At the Philippine pavilion located in the “Jubilee” area of ​​the Expo, Sheikh Mohammed bin Rashid Al Maktoum was briefed on the pavilion’s content inspired by coral reefs due to the Philippines’ connection to the marine environment, as it consists in an archipelago of more than 7,000 islands in Southeast Asia, and has vast areas of coral reefs that extend over an area of ​​26 thousand square kilometers. He also saw one side of the exhibits that reflect the mix through which the Philippines established a homogeneous ancient culture that has maintained its sustainability for more than 4,000 years.

During the visit, he saw a group of works of art and sculptures in the pavilion, which was built in an area of ​​1,386 square meters, which is the largest in the Philippines in the history of its participation in the Expo. His ambition stems from a long history of interaction with surrounding peoples over long periods of time. His Highness congratulated those in charge of the pavilion for receiving the millionth visitor, wishing the Philippines and its kind people every progress and prosperity.

Sheikh Mohammed bin Rashid Al Maktoum’s tour of the Expo also included a visit to the Portugal Pavilion, which is located in the Jubilee area, and is inspired in its design by the ancient European country’s ancient heritage in the field of exploration, that presented to the world a group of great explorers, among which the famous traveler Magellan stands out, where the pavilion imitates sailboats, which served in the past to discover the world, while the central exhibition area took the form of a sailboat caravel dating back to the 15th century AD

Listened to an explanation of the components of the pavilion, which raises the slogan “One country, one world” and includes an interactive library that offers visitors a wide range on the most important features of Portugal and its cultural diversity and progress in many fields . , and the investment opportunities it offers and its environmental diversity, and its efforts in the field of sustainable development, including the great dependence on renewable energies, which represent about 65% of the total energy supply there, as well as its various attractions tourism, since Portugal is one of the most outstanding tourist destinations in the world.

Also in the Jubilee area, Sheikh Mohammed bin Rashid Al Maktoum visited the Venezuela Pavilion, distinguished by its striking artistic design, which transports visitors to the country of eight provinces and presents an integrated presentation of its geographical and cultural heritage rich in diversity, and its social and participatory character. The pavilion presents a picture of the urban heritage of Venezuelan society, with a structure inspired by the traditional collective huts in which the indigenous people of Venezuela, the Yanomami people, called “Chapunos” lived and are characterized by their large size and circular structure.

He toured the sections of the pavilion, which in their content reflect the spirit of cooperation that the Venezuelan people live, their folklore and traditional crafts, as well as various investment opportunities, which depend largely on the rich natural resources that abound. in their lands such as gold and aluminum, while Venezuela is one of the largest oil producers in the world.

He was informed about the ideas, innovations and projects that the authority presents to its visitors at the Expo as the first institution of digital public services in the world, where the authority presents its main projects in the field of clean energy and the use of technologies. of the fourth industrial revolution, which will revolutionize the work of public services in its entirety.

Listened to an explanation about the pavilion, which includes two main areas, the first focused on clean energy projects, the most important of which is the Mohammed bin Rashid Al Maktoum Solar Energy Complex, the largest solar energy project in a single place in the world. , as well as the green hydrogen project, while the second zone was dedicated to the “decathlon competition.” Solar Energy Middle East, the world competition of universities to design homes based on solar energy, to transform traditional homes in the Middle East into technology, oases that contribute to achieving energy efficiency and rationalizing water consumption.

- Advertisement -
Share
Facebook
Twitter
Pinterest
WhatsApp
Previous articleConcert industry and Corona: A reboot must earn its name
Next articleAfter taking on the royal family, Netflix has the Tories in its sights in Anatomy of a Scandal