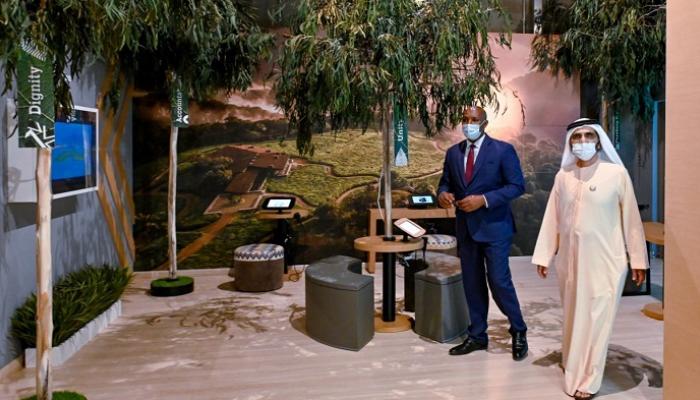 Sheikh Mohammed bin Rashid Al Maktoum, Vice President and Prime Minister of the UAE and Ruler of Dubai, affirmed the UAE’s enthusiasm to strengthen its ties with various friendly African countries and is proud of the partnerships it has with most African countries. .

He noted that these partnerships are built on a firm foundation of mutual respect and consideration of common interests.

He stressed that the intense development efforts that African countries are witnessing, and a comprehensive development renaissance aimed at harnessing the human potential and rich natural resources that distinguish them, remain forever appreciated and admired, appreciating what the brown continent is working to implement the expansion. of infrastructure projects that support development, stressing that the UAE State believes in the importance of partnership in the field of exchanging experiences and successful experiences in a way that enhances development efforts and contributes to accelerating their pace.

During the visit to the Botswana pavilion, Sheikh Mohammed bin Rashid Al Maktoum and President Mogotsi Eric Masisi exchanged cordial talks on bilateral relations in general and ways to develop cooperation between the two countries and in various fields, especially investment and trade, in light of the rich experience enjoyed by the United Arab Emirates and the many opportunities that Botswana offers, even paves the way for more investment partnerships and for raising the level of trade between the two countries, according to the Agency of Emirates News. 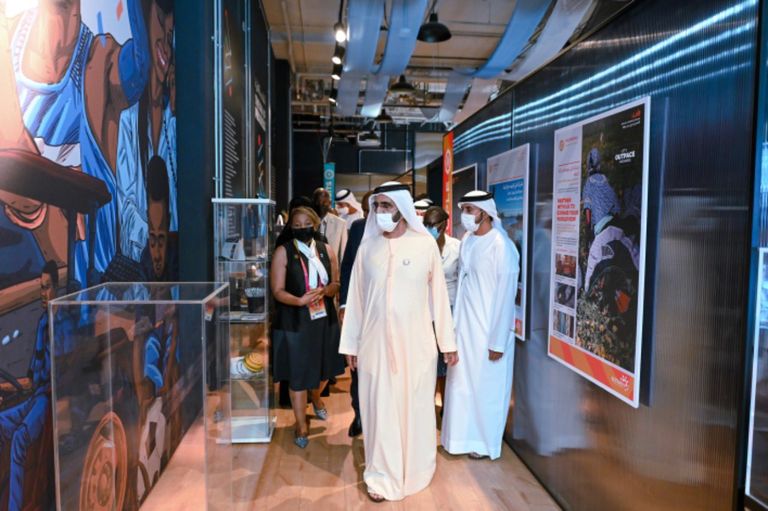 The meeting addressed the significant positive impact of hosting Expo 2020 Dubai in the United Arab Emirates on the economies of the region, especially as it is the first time that the prestigious event has been held in the Middle East, Africa and the South. from Asia, where the exhibition represented an ideal platform for the conclusion of multiple trade and investment agreements, as well as its impact in achieving greater cultural affinity with the peoples of the African continent.

His Highness Sheikh Mohammed bin Rashid Al Maktoum and the President of Botswana were informed about the elements of attracting investment that the friendly African country is promoting through the Expo, especially the enjoyment of large areas of virgin lands rich in environmental diversity. as well as the human energy that is diverse as the people of Botswana speak more than 20 languages. 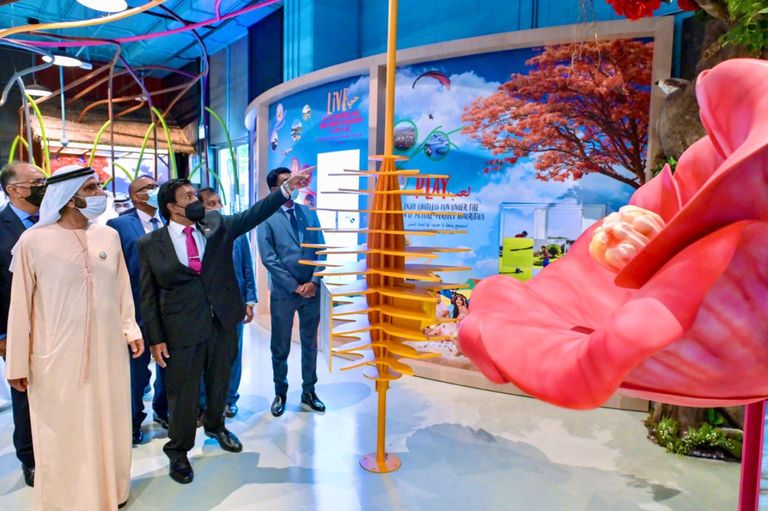 During the meeting of Sheikh Mohammed bin Rashid Al Maktoum with Emmerson Mnangagwa, President of the Republic of Zimbabwe, in his pavilion located in the “Opportunities” area of ​​the Expo under the slogan “Zimbabwe… the land of great languages”, the two The parties reviewed the development of bilateral relations during the past period and what can be done To advance the partnership between the two countries, especially on the economic front, Zimbabwe believes that the United Arab Emirates provides the main gateway to markets from the Middle East, Asia and Europe.

The meeting addressed promising areas to improve bilateral cooperation, especially at the level of commercial exchange, in addition to allowing the private sector and businessmen from both parties to meet and discuss various investment opportunities, in light of the development of economic ties and growth. of trade, as the UAE is Zimbabwe’s second largest trading partner, as well as cooperation in exploring opportunities Establish new partnerships within the agriculture and mining sectors, as well as the pharmaceutical and energy industries, which these are the areas in which Zimbabwe seeks to advance during the next phase. 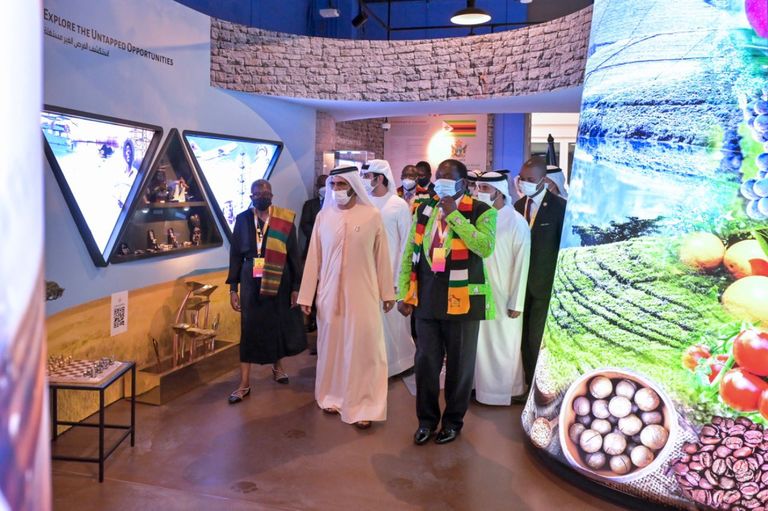 Sheikh Mohammed bin Rashid Al Maktoum and Emmerson Mnangagwa listened to an explanation of the information provided by the pavilion of the African friendly country at the Expo on investment opportunities and the main sectors available in the agricultural, mining, tourism and other sectors, while the third region introduces Zimbabwe to human capital that is committed to the values ​​of work and innovation.

In addition, Sheikh Mohammed bin Rashid Al Maktoum inspected the pavilion of the Republic of Mauritius, where he met with Brethveraging Robbon, and the meeting addressed the development of bilateral relations in light of the consensus of views on the importance of discovering more alliances than support the development trends of the two countries, as well as identify the best areas through which to build and activate alliances. The most important of which is the field of tourist exchange, in light of the various attractions enjoyed by the two countries that place them among the distinguished tourist destinations around the world. 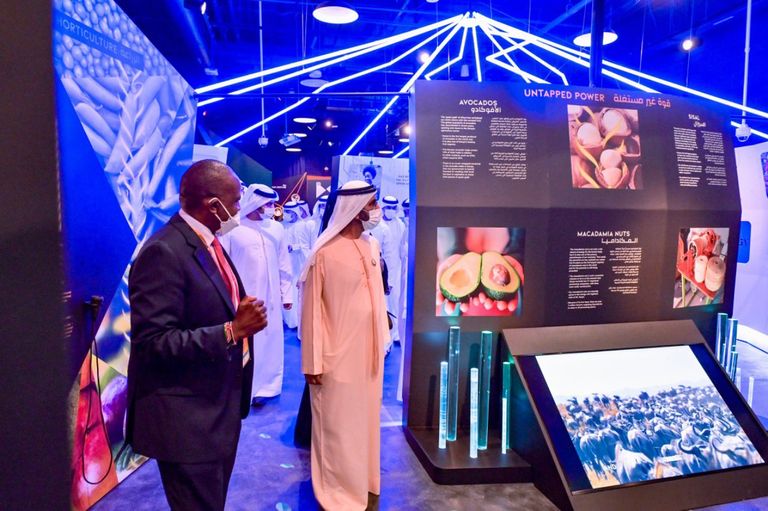 The visit included the pavilion located in the theme area, and Sheikh Mohammed bin Rashid Al Maktoum and the President of Mauritius inspected the pavilion’s presentation of the features enjoyed by the island located in the Indian Ocean, the most important of which is the environmental diversity, in addition to the elements that distinguish it as a differentiated tourist destination, among which the beaches and extensive wooded areas stand out. This in conjunction with its current and future projects that aim to achieve comprehensive economic growth, by taking advantage of the island’s natural assets.

During his tour of the Expo, Sheikh Mohammed bin Rashid Al Maktoum met with Evan Spiegel, co-founder and CEO of Snap Inc., owner and global operator of the Snapchat app, where he learned about the company’s growing activity in the Middle East and North African region from its regional headquarters in Dubai, which opened in 2017, Dubai Internet City, the burgeoning partnership between Dubai and the global enterprise, akin to the constructive cooperative relationships it brings together with leading technology companies from around the world. world. 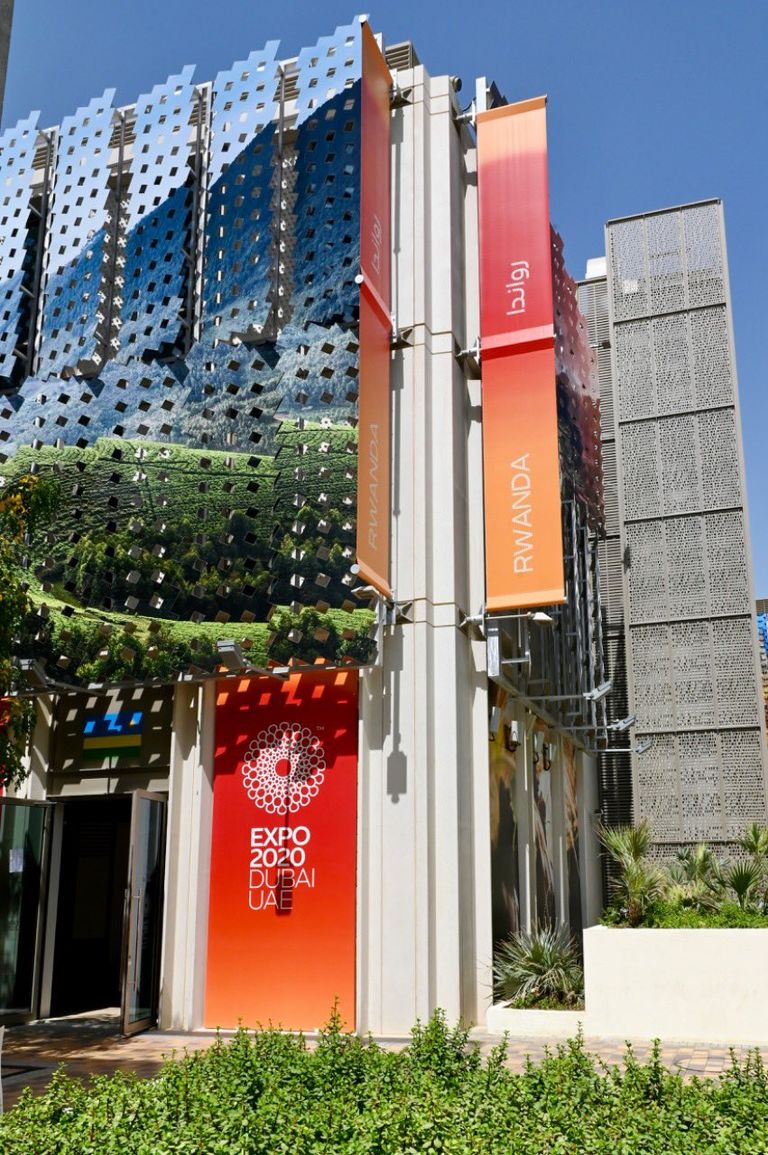 For his part, Evan Spiegel expressed his full appreciation for the great development carried out by Dubai under the leadership of Sheikh Mohammed bin Rashid Al Maktoum, as an inspiring model for sustainable development in accordance with a vision of the future based on the rationalization of resources. and the use of technology in a way that allows finding effective solutions to face existing and potential challenges and discover opportunities to provide people with a better quality of life Which is reflected in the values ​​of the Expo, which brings together civilizations in Dubai, innovations and creativity from 192 countries under the slogan “Connecting Minds and Creating the Future”.

As part of Sheikh Mohammed bin Rashid Al Maktoum’s visit to the Expo today, he stopped by the Rwanda Pavilion located in the “Opportunity Zone”, which tells the story of the African country’s overcoming the horrors of war that suffered in 1994. and its transition to a growth stage full of opportunities based on what Rwanda enjoys of rich natural ingredients, with a focus on a series of important axes, the most prominent of which is the preservation of the environmental diversity and rich wildlife, which most distinguishes its tropical forests, in addition to working on the development of the tourism sector taking advantage of the elements of natural attractions scattered everywhere, and attention to encourage investment and develop green economy activities.

Sheikh Mohammed bin Rashid Al Maktoum’s tour of the Expo included a visit to the pavilion of the State of Kenya, which was keen to present, through its participation in the Expo, its economic advantages and food products, as well as presenting important characteristics of their culture and ancestral traditions.

During his visit to the “Opportunities” area pavilion, he learned about the ambitious development projects adopted by the friendly African country, among which are clean and sustainable energy projects, among which the Garissa solar energy project stands out, which has a capacity of 54.6 megawatts, and is the largest in East and Central Africa.

He also continued with an explanation of the role played by Nairobi, as a vital center that leads and facilitates interdependence and communication between Africa and the world, and the great cultural diversity that Kenya enjoys through the more than 40 tribes that make up the fabric of Kenyan society. .

- Advertisement -
Share
Facebook
Twitter
Pinterest
WhatsApp
Previous articleGermany plans to introduce gas reserve law into force
Next articleMarquette will play North Carolina in the first round of the NCAA Tournament. Here’s what you need to know about the Tar Heels.