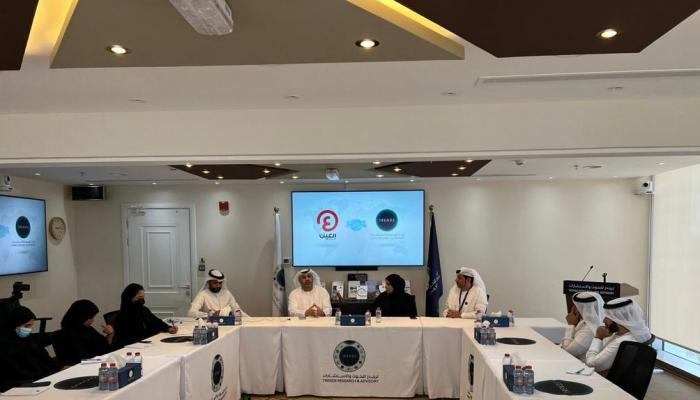 “Al-Ain News” and the “Trends” Research Center discussed ways of cooperation in the fields of research and media to serve the orientations and strategies of the two sides aimed at spreading knowledge, rejecting violence and extremism, and spread tolerance values. and the peace. The two sides agreed to soon conclude an agreement on the matter.

This came during a visit by Ahmed Saeed Al-Alawi, editor-in-chief of “Al-Ain News” portal to the Trend Center, where a discussion session was held in the presence of Muhammad Abdullah Al-Ali, CEO of the Center, while the seminar was moderated by the researcher Noura Al-Habsi, Director of the Center’s Publications Department, who gave a brief review of “Trends” and the nature of her work, her vision, her publications and the areas of research and studies. He promises

In his speech, Al-Alawi emphasized the role of new digital media in disseminating knowledge and information to the target audience quickly and professionally, noting that new media changed the course of media in a significant and influential way. , highlighting the importance of keeping up with the media with recent developments in your field of work.

The editor-in-chief of “Al-Ain News” said that digital media are characterized by several things, among which speed and brevity stand out, highlighting the importance of objectivity and transparency in the transmission of events so that the factor speed does not prevail over content. .

In the panel discussion, Al Alawi emphasized that digital media provides information in addition to speed, in attractive forms and designs that help increase interaction and the strength of the impact it has on society, indicating that social networks play a effective role in the communication of knowledge. , and has changed its operation, and has contributed to creating new concepts, among which interaction and mutual participation stand out.

He pointed out that they are complementary and each one needs the other, since scientific research provides documented information and opinion, while the media provides the publication and introduction of content and its delivery to the largest possible audience.

During the visit, Al-Alawi and Al-Ali discussed ways of cooperation between Trends Center and Al-Ain News in the fields of research and media to serve the orientations and strategies of the two sides aimed at disseminating documented knowledge, rejecting violence and extremism. confronting extremist ideology and spreading the values ​​of tolerance, coexistence and peace, both parties agreed to conclude an agreement in this regard soon.

Al-Ali praised Al-Ain News’s efforts to keep pace with events in a professional manner that combines fast and highly professional delivery of news material, distinguished by sober and objective journalistic language presenting information from press in a modern way adhering to accuracy and credibility, expressing the happiness of “Trends” to deal with and cooperate with this enlightened media edifice.

For his part, the editor-in-chief of “Al-Ain News” praised the efforts of the scientific and research center “Trends”, the level of its publications and its serious effort to spread the thought of tolerance, coexistence and human rights. fraternity. He also praised the center’s role in finding and qualifying young citizen researchers who can keep up with current developments and developments, in a way that develops their capabilities and serves scientific research and knowledge in general.