European coordinator of talks on “Iranian nuclear” meets in Tehran 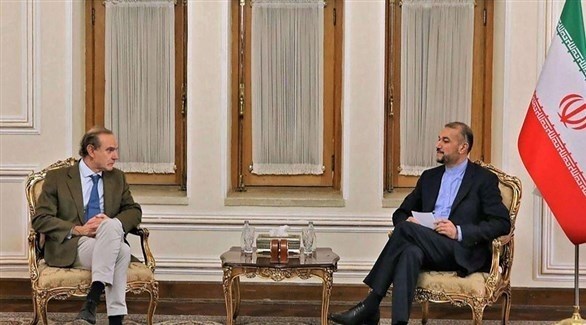 The European Union diplomat Enrique Mora, who coordinates the talks to reactivate the nuclear agreement, met this Sunday in Tehran with Iran’s foreign minister and chief negotiator, according to official media, as part of a visit in which he hopes to resolve the remaining points of disagreement between the Islamic Republic and the United States.

A statement from the Iranian Foreign Ministry quoted the minister as saying that “the absence of the American political decision to lift the sanctions related to the economic benefits of the Iranian people is currently the obstacle to achieving the final results.”

He stressed that “harvesting all the economic benefits and effectively lifting the ban is our top priority.”

This meeting followed a meeting between Mora and chief negotiator Ali Bagheri, who is also the Deputy Foreign Minister for Political Affairs.

The official news agency, IRNA, noted that Bagheri assured Mora of “the determination of the Islamic Republic of Iran to resolve the agreement in Vienna,” and considered that “if the US side shows a realistic vision, the agreement can be reached.” .

Before his arrival, Mora included his visit as part of filling “the remaining gaps in the Vienna talks on the Joint Comprehensive Plan of Action (the official name of the agreement)… we have to close this negotiation. The stakes are high. “

Before Mora’s arrival in Tehran on Saturday, European Union Foreign Minister Josep Borrell hoped a deal would be concluded soon.

He said on the sidelines of the “Doha Forum”, “We are very close (to the agreement), but there are some pending issues”, adding: “I cannot say when and how, but it is a matter of days”.

On Saturday, Amir Abdollahian stressed that one of the pending issues was the removal of the Revolutionary Guard’s name from the US “terrorist” list.

He stressed that Iran wants to cancel this designation, although the Guard commanders asked that this matter not be an “obstacle” to the agreement if it serves Tehran’s interests.

Even if his name is removed from the list, the move will remain symbolic, as the Revolutionary Guards have been subject to various US sanctions packages for many years.

US special envoy to Iran Robert Malley, who is also his country’s chief negotiator in the talks, stressed that sanctions against the Guard will remain in place regardless of the deal or its removal from the list of terrorist organizations.

This coincided with US Secretary of State Anthony Blinken’s visit to Israel, where he affirmed the commitment of his country and the Arab state to prevent Iran from acquiring an atomic weapon, despite their divergent views on reviving the nuclear deal.

The agreement allowed the lifting of sanctions on Tehran in exchange for strict limits on its nuclear program. However, the United States withdrew under former President Donald Trump and reimposed harsh sanctions.

Western countries stress the need to speed up the completion of the talks and revive the deal in light of Iran’s accelerating nuclear activities and the shortening of the time it may take to collect enough materials to build an atomic weapon, knowing that Tehran He has always refused to seek such a thing.