“Europe is with you”: EU leaders pledge support to Ukraine during visit to kyiv 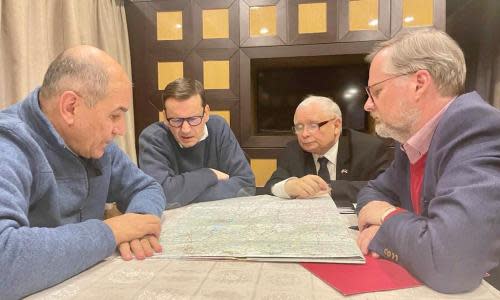 Volodymyr Zelenskiy told reporters that “with allies like this we will win this war” after the prime ministers of Poland, the Czech Republic and Slovenia made a dangerous train journey to kyiv to offer their support.

At a press conference after the meeting, Czech Prime Minister Petr Fiala told the Ukrainians: “Europe is with you.”

“The main purpose of our visit and the main message of our mission is to tell our Ukrainian friends that they are not alone,” he said.

The leader of Poland’s ruling party said an international peacekeeping mission should be sent to operate in Ukraine.

Related: Tony Blair: The West Has Fifteen Days To Help End The War In Ukraine

“I think it is necessary to have a peacekeeping mission, NATO, possibly some broader international structure, but a mission that can defend itself, that operates on Ukrainian territory,” Jaroslaw Kaczynski said during the conference, which was broadcast. on Polish television.

“It will be a mission that will fight for peace, to give humanitarian aid, but at the same time it will also be protected by the appropriate forces, the armed forces,” he said.

The comments followed an extraordinary meeting with the three EU leaders in a capital that is close to being surrounded by Russian forces. They are the first Western visitors to kyiv since the war began two weeks ago.

In footage of the meeting posted on social media, Zelenskiy was heard briefing EU leaders on the latest military and humanitarian situation and negotiations with Russia.

“They are bombing everywhere,” Zelenskiy is heard telling them. “Not only in kyiv, but also in the western areas.”

He also informed the Czech, Polish, and Slovenian Prime Ministers, Fiala, Mateusz Morawiecki, and Janez Janša, that three Chechen brigades had been identified among the Russian forces.

Zelenskiy expressed his gratitude for his visit, calling it a “powerful testimony of support.”

Upon their arrival in kyiv, after a three-hour journey, a photograph of the three leaders and Kaczyński, who had accompanied them, was published showing them studying a map of Ukraine in a wood-panelled room on a train.

Related: Ukraine will not join NATO, says Zelenskiy, as bombing of kyiv continues

Morawiecki tweeted: “It is here in war-torn kyiv that history is being made. It is here, that freedom fights against the world of tyranny. It is here that the future of all of us hangs in the balance. The EU supports Ukraine, which can count on the help of its friends: today we bring this message to kyiv”.

Fiala tweeted: “The purpose of the visit is to express the unequivocal support of the European Union for Ukraine and its freedom and independence.

“At the same time, we will present a comprehensive package of support to Ukraine and its citizens during the visit. The international community has also been informed of this visit by international organizations, including the United Nations.”

In statements from their respective capitals ahead of the meeting with Zelenskiy, it was said that they would be offering their support to the Ukrainian president as representatives of the other 24 EU heads of state and government.

Janša tweeted: “Europe must guarantee Ukraine’s independence and make sure it is ready to help rebuild Ukraine.”

The visit came as emergency services in kyiv said at least five other people had been killed in shelling in the capital, including at a 15-storey apartment building shortly before dawn on Tuesday.

A downtown subway station that had been used as a bomb shelter was also damaged. City authorities tweeted an image of its facade blown up.

kyiv has been spared the worst of the fighting since Russia invaded Ukraine on February 24, but the Russian army has been gradually encircling the capital.

The Polish government said that the visit of the three EU leaders to Ukraine and its capital was carried out in agreement with the presidents of the European Commission and Council, Ursula von der Leyen and Charles Michel.

The leaders were in kyiv, the statement said, as “representatives of the European Council.”

“The purpose of the visit is to confirm the unequivocal support of the entire European Union for the sovereignty and independence of Ukraine and to present a comprehensive package of support to the Ukrainian state and society,” the Polish government statement said.

But EU officials in Brussels said there was some nervousness about the visit and diplomats in some capitals said they had not been notified until minutes before the trip was announced.

The meeting came as parliamentarians across the continent voted to expel Russia from the Council of Europe, the main human rights organization on the continent, over the invasion of Ukraine in yet another sign of the Kremlin’s departure from the Western democratic order.

The vote has great symbolic value, although it became something of a formality, after Russia announced on Tuesday that it was withdrawing, jumping before it was pushed forward.

Parliamentarians from the other 46 member countries of the Council of Europe voted in favor of a resolution that read: “In the common European home, there is no place for an aggressor.”

He is described in the EU legal text as “a Russian oligarch who has close and long-standing ties to Vladimir Putin.”

“He has had privileged access to the president, and has maintained very good relations with him,” the text adds. “This connection with the Russian leader helped him maintain his considerable wealth.

“He is a major shareholder in the Evraz steel group, which is one of the largest taxpayers in Russia.”