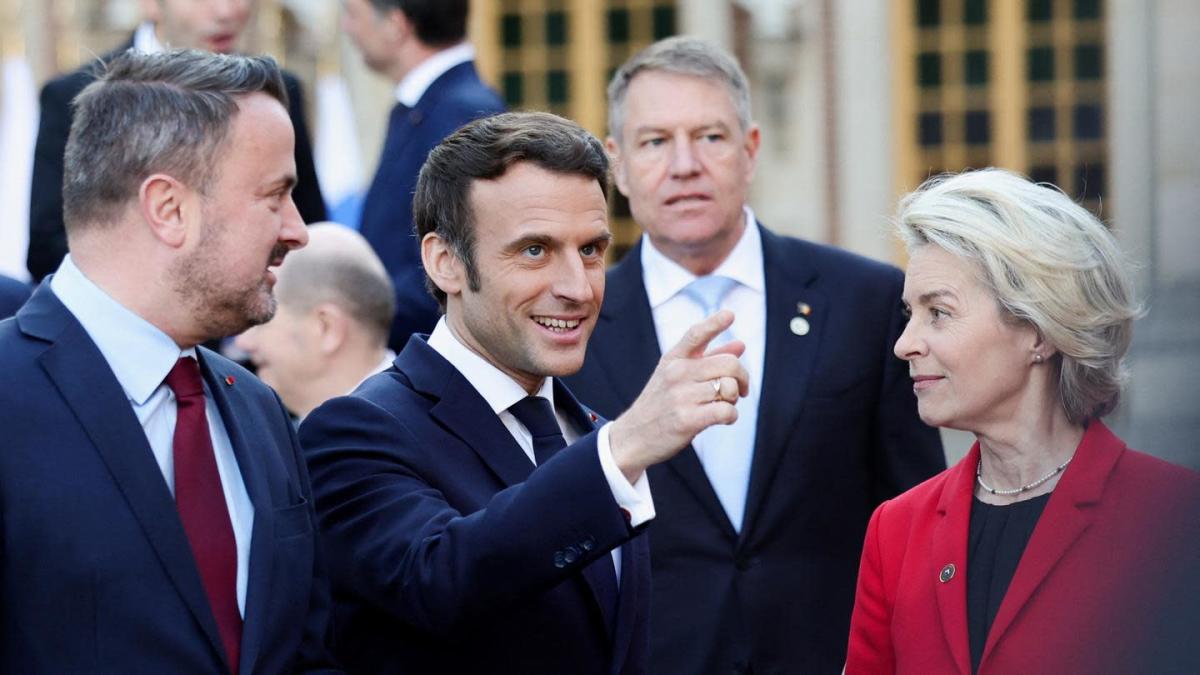 The EU is undergoing shock therapy, bringing it closer and setting it on the path that Emmanuel Macron has always wanted it to follow. Germany submits.

What the 27 Heads of State and Government are debating these days at their Versailles summit could be summed up in two words. It is about European sovereignty. And the host of this event is a man who promoted the idea of ​​a sovereign Europe like no other: immanuel macron. On the agenda of the informal meeting there are three issues that are particularly important to the French president. More money for common European defence, strengthening of the European economy, independent energy supply.

Macron has been campaigning for all this for years, but has been unable to achieve much because the government in Berlin in particular has carried out his plans with a mixture of skepticism, denial and drowsiness. When Macron mentioned the word European sovereignty, people in Berlin reflexively grew concerned. money. According to the German suspicion, Macron wants to achieve a mutualization of debts. That is why the impetuous French president was allowed to run aground.

But then came the shock of Corona and the German government changed its convictions for the first time. In July 2020, the EU agreed on a €750 billion recovery fund. For the first time in their history, the EU institutions were allowed to borrow themselves. Macron saw this breaking of a taboo as a personal success.

Putin’s war of aggression is the second blow pushing the Union in the direction Macron wants it to go. There is agreement that European member states should and will spend more money on defense. Macron is pushing for a joint debt program to fund defense in line with the recovery fund.

However, it’s not clear how all the money for more weapons can lead to greater weapon efficiency. After all, member states have been carrying on a cumbersome and not yet particularly fruitful discussion about so-called structured cooperation, also known as Pesco, for years. Nor is it clear how a European Union, strengthened militarily, will be able to NATO it behaves

Emmanuel Macron made the diagnosis in 2019 that NATO was “brain dead”, which made him suspect that it wanted to organize European defense without the US and under the leadership of France. Meanwhile, the French president has made it clear on several occasions that he too sees European security best guaranteed within NATO. The war in Ukraine may have been a lesson in this perception.

“Europe must prepare for all scenarios, our democracy is threatened,” Macron said at the start of the summit. And the president can move Versailles quite rightly present as the EU’s chief strategist. However, he should not have let his European colleagues know that a series of foreign policy failures have tarnished the glamorous (self) image of the strategist Macron.

In Mali, the French experienced disaster, in the Libyan civil war they frustrated European policy and were shipwrecked. Eastern Europeans in particular have not forgotten that Macron wanted to develop a special relationship with Vladimir Putin over his head for a long time. Less than three weeks after his election in May 2017, he received the Russian president at the magnificent Royal Palace of Versailles. Today you can see what the desired friendship turned out to be: open hostility.

Europe is obviously in the process of growing together at a rapid rate. The Versailles summit provides further proof of this. But that does not mean that the 27 are now in agreement on all issues. There is a dispute over how quickly one should become independent of Russia’s energy supply. Germany, for example, rejects an embargo on Russian oil and gas, while other member states press it. There are also differences of opinion on an issue that has received the most attention: Ukraine’s membership in the EU.

While the Baltic states and Poland are putting pressure on him, while Commission President Ursula von der Leyen recently publicly described Ukraine as part of “ours,” Macron remains skeptical. An enlargement of the EU without fundamental reform would lead to paralysis. That’s the point of him. Olaf Scholz shares this argument. He made it known at Versailles.