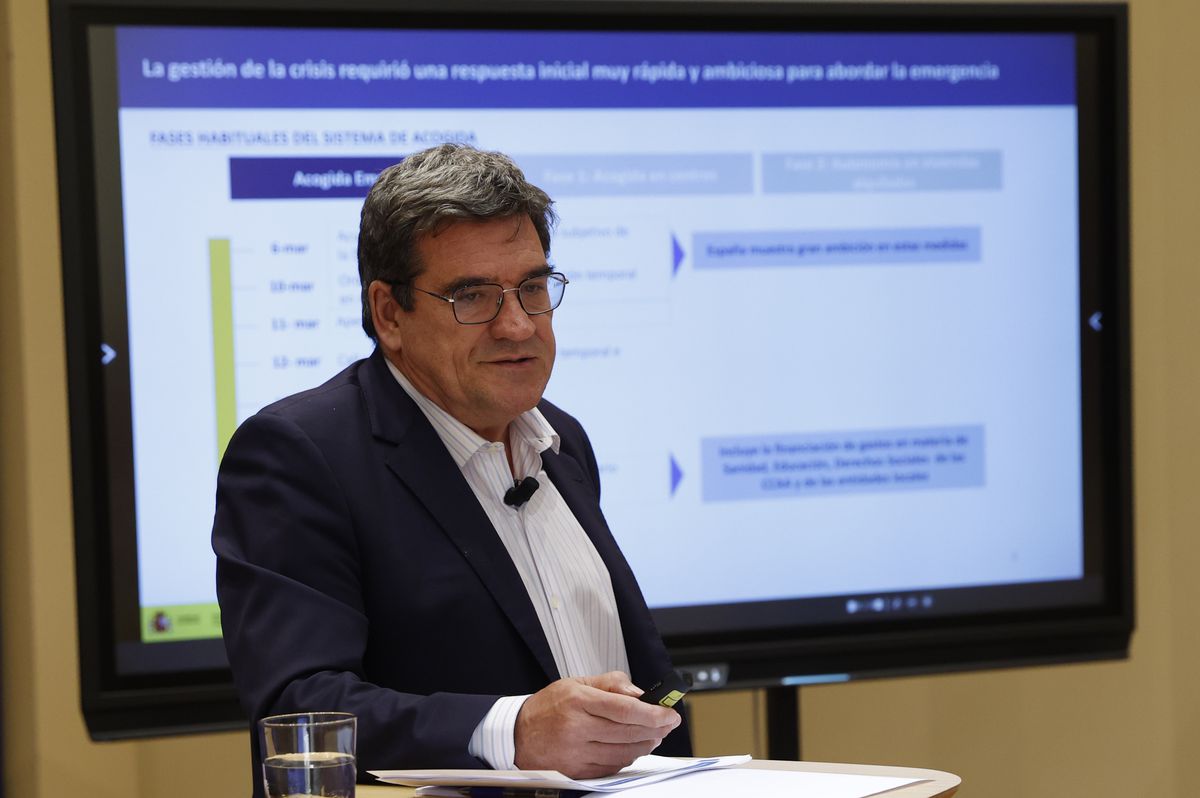 The Minister for Inclusion, Social Security and Migration, José Luis Escrivá, announced this Monday financial aid for those displaced by the war in Ukraine who are outside the public reception system. The contribution will go to the Autonomous Communities and Municipalities via subsidies and, according to preliminary calculations, will benefit around 40,000 displaced people out of the 125,000 who have arrived in Spain. The allowance, which lasts six months from the date of application, is 400 euros per month per family, to which must be added 100 euros for each responsible minor. For example, a family consisting of a father, mother and three minor children would receive 700 euros per month. There is still no fixed date for the implementation of the plan.

To access this benefit, applicants must already have temporary protection, the legal figure that has allowed the EU to explicitly grant residence and work permits to war refugees in Ukraine, and which Spain grants within 24 hours. They must also be registered, have a social security number and prove that they lack the financial means to meet their basic needs. The fulfillment of these requirements will determine the final number of beneficiaries. Currently, of the 125,000 Ukrainian refugees in Spain, only 21,000 are housed in public centers or hotels approved by the immigration service; the rest, around 104,000 people, would be potential recipients of the aid, although according to initial calculations only 40% (40,000 people) meet the requirements.

The lack of economic aid has been one of the concerns of Ukrainians who have settled in Spain and many of the families who have taken them in. In April, Halyna Rybachok, a Ukrainian living in Madrid, who ran to the border to pick up her daughter and two grandchildren right after the outbreak of war, told EL PAÍS about the difficulties encountered during admission. With aching legs and about 500 hours of salary as a house cleaner, she’s had a hard time increasing her budget to meet the new expenses. Miguel Balaguer, an Alicante engineer who welcomed a Ukrainian couple into his home, also expected financial support, but so far the help (for maintenance or rent) has only been available to refugees who depend on the government’s reception system. “They are very concerned because they don’t want to be a burden and are very aware of the efforts we are making,” Balaguer told EL PAÍS. “I don’t want that money for myself, but some of what the government would spend to keep them in a shelter and feed them could be used to organize those who have preferred to go to family live.” The subsidies announced this Monday by Escrivá will not be paid to the foster families but directly to the refugees, but are believed to help cover the expenses they incur.

The minister used World Refugee Day to take stock of the reception of displaced people in Ukraine, a conflict that has forced more than 7.5 million people to flee the country in just four months. The number of refugees arriving in Spain, some 125,000, already exceeds the 112,000 Ukrainians who made up the diaspora in the country. The data also shows how the Ukrainian community determined where the newcomers settled, who were concentrated precisely in the regions where more compatriots were stationed. Three out of four refugees live in four autonomous communities: 24% in the Valencian Community, 23% in Catalonia, 15% in Madrid and 14% in Andalusia. Spain is the fourth EU country in terms of the number of applications for temporary protection granted.

Escrivá highlighted the rapid integration of refugees into the labor market, something “unusual” in other profiles. According to their information, there are 47,000 displaced persons with social security numbers and more than 8,100 workers. Ukrainians have found jobs, mainly in the hotel industry, where 30% of workers have been placed. The other sectors where they were most commonly used were construction, commerce, administration, agriculture and manufacturing.