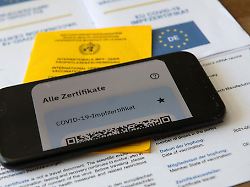 Hannover (dpa / lni) – The Hannover police and public prosecutor’s office are investigating several suspects, including four former employees of the clinic and several hairdressers, due to false vaccination certificates. A total of about two dozen apartments, commercial premises and vehicles have been searched in the last 14 days, authorities announced on Wednesday.

A 43-year-old clinic employee is said to have presented her employer with a false vaccination card in December. When her apartment was searched, it turned out that the vaccination cards of her two children were also falsified, according to the investigation. Three of the woman’s companions, aged 32, 51 and 57, are also being investigated for false vaccination certificates. The four women are no longer employed at the hospital, she said. The so-called facility-related vaccination requirement is in effect from this Wednesday: Employees in nursing homes and hospitals must be vaccinated against Covid-19.

According to the police, employees of a hairdressing salon in Hannover exchanged views on the exchange of false vaccination cards in January. Little did they know that a 24-year-old customer at the store was a police officer. A false passport and two forms of proof of vaccination certificates were later discovered in the room.

Anyone who falsifies official documents should expect severe fines or even imprisonment. Police and prosecutors warned that there was a risk of a criminal record and therefore annotation in the certificate of good conduct. Among other things, the owner of a hairdressing business, 59, who had been caught twice with an “incorrect certificate” of exemption from the mask requirement, has already been convicted. He received a fine of 1,800 euros. A 26-year-old medical assistant who falsified the vaccination record of an acquaintance as a favor was sentenced to a fine of 4,200 euros, according to the police.