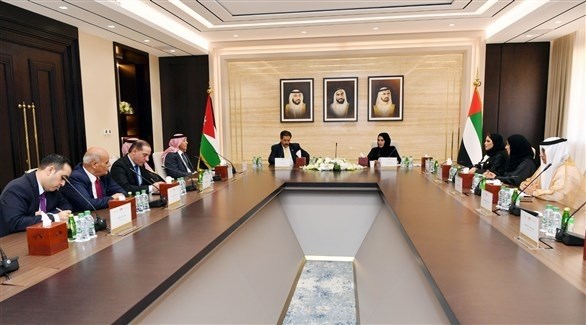 The Emirati-Jordan Parliamentary Friendship Committee discussed, at a meeting held today at the Federal National Council headquarters in Abu Dhabi, ways to enhance cooperative and partnership relations between the two countries in various fields, especially parliamentary, to achieve the vision of the leaderships of the two countries and the aspirations of the two peoples.

At the beginning of the meeting, the second vice president of the Federal National Council, Naama Abdullah Al-Sharhan, highlighted the depth of the historical fraternal relations that bind the Emirates with Jordan, highlighting their history and taking root thanks to constructive and continuous cooperation. and coordination at all levels.

Al-Sharhan congratulated the Jordanian people on the occasion of the presentation to King Abdullah II of Jordan and Queen Rania Al Abdullah of the Zayed Award for Human Fraternity 2022, in recognition of their efforts to promote brotherhood, human dignity, tolerance, respect for diversity and peaceful coexistence. .

Al Sharhan praised the cooperative aspects and distinguished parliamentary relations between the two sister councils, and the great harmony and harmony between them on many views, issues and positions on Arab, Islamic and humanitarian issues in various regional and international parliamentary forums. and build solid foundations and strong links.

Al-Sharhan stated that the scale of the complex challenges and crises that the entire world is witnessing requires us to come together and go forward with all our might to cement strong brotherly ties.

- Advertisement -
Share
Facebook
Twitter
Pinterest
WhatsApp
Previous articleLower Saxony and Bremen: Luftwaffe to install all A400M aircraft in Wunstorf
Next articleThe United Arab Emirates is the guest of honor at the fifteenth session of the Energy Conference in Morocco