Emirates Fatwa: Unifying the value of Zakat Al-Fitr at 25 dirhams 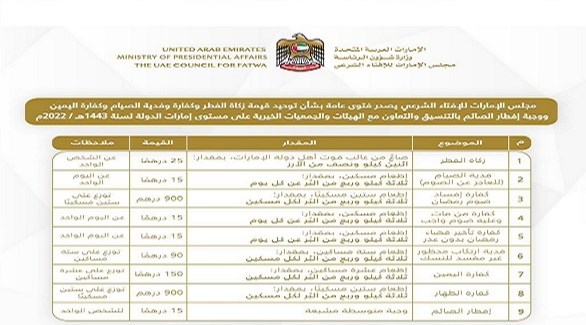 The Emirates Council for Sharia Fatwa issued a statement on General Sharia Fatwa No. 21 of 2022, according to which it clarified the amount and value of zakat al-Fitr, atonement for ransom for fasting, atonement for an oath and iftar by a fasting person for the year 1443 AH 2022, based on the results and recommendations of the first consultative forum between the Fatwa Council, officials and representatives of charitable organizations and associations in the state, which was held on Thursday 14 Sha’ban 1443 AH, March 17 (March) last.

In the content of the general fatwa, the Council of the Emirates indicated the amount and value of zakat al-fitr, expiation and breakfast of the fasting person at the time of giving zakat al-fitr, and the decision on the payment of the value, according to the following.

Oh no:
The amount of zakat al-fitr is 2.5 kg of rice per person, and it can be given in kind of rice or in cash, and its cash value for the Hijri year 1443 AH is 25 dirhams per person.

Secondly:
The ransom amount for fasting for those who cannot fast is to feed a poor person with 3250 kg of land per day, and it can be given in kind or in cash, and its cash value for the Hijri year 1443 AH is 15 dirhams for every day.

By rooms:
The atonement of the zihaar, for someone who cannot atone by fasting, is to feed 60 poor people, which is equivalent to 3250 kg of straw, and the total cash value for the Hijri year 1443 AH is 900 dirhams.

In fifth place:
The atonement amount for an oath is to feed 10 poor people with 3250 kg of land for each poor person, and it is permissible to take it out in kind or in cash, and the total cash value for the Hijri year 1443 AH is 150 hundred dirhams , distributed among 10 poor people.

Sixth and seventh:
The atonement for one who dies due to obligatory fasting, and the atonement for unexcusedly delaying the recovery of Ramadan until the next Ramadan begins.

Eighth:
The ransom for committing a prohibited act, which does not alter the rituals of Hajj or Umrah, is to feed 6 poor people with an amount of 3,250 kg of land for each poor person, and can be delivered in kind or in cash, and its value total cash in Hijri year 1443 AH for each banned person, 90 dirhams distributed among 6 poor people.

Nineth:
The minimum amount for a fasting person to break his fast in the Hijri year 1443 AH is 15 dirhams per meal.

The council also pointed out that all the values ​​mentioned in the general fatwa are estimated according to the prices in the United Arab Emirates and, consequently, are subject to modification according to the fluctuation of market prices and their differences from one country. to another. , and that what is adopted in them is to estimate the livelihood of the majority of the people in the Emirates. It takes into account the different conditions of societies.

Tenth:
The time of paying zakat al-fitr, it is better to do one’s duty and keep in mind Sharia purposes to enrich the poor on Eid day, give zakat al-fitr after sunrise on Eid day, and before of the Eid prayer, as it is correct to provide for the necessities a day or two before Eid, and it is also correct to perform a performance throughout the day of al-Fitr. Before sunset and after that, his act is a decree, not an execution, with what may befall his owner and his agent in charitable societies and organizations from the sin of negligence and breach of duty.

twelfth:
Paying the value is absolutely acceptable, and may even be the best thing if the interest of the beneficiaries requires it.

The council distributed the general fatwa to all institutions, fatwa centers, agencies and charities at the emirate level in the country.

The UAE Council for Sharia Fatwas, headed by Allamah Abdullah bin Beyah, offered its warmest congratulations and blessings to the wise leadership, the people of the UAE and those residing on their land, the Muslims everywhere and to the world in general. on the occasion of the advent of the blessed month of Ramadan, asking Almighty God to make the arrival of it a good one and a blessing for all mankind and mankind.

- Advertisement -
Share
Facebook
Twitter
Pinterest
WhatsApp
Previous articleCovid crisis ‘not over’ as hospitalizations set to rise for two weeks, warns Chris Whitty
Next articleDo you want to go to the Masters Tournament? Here’s what golf fans need to know