“Emirates Cycling” achieves second place in the Tour of Catalonia 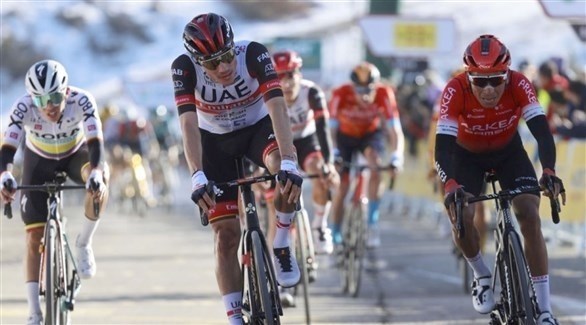 Juan Ayuso of the Emirates Cycling Team put in a strong performance in stage three of the Tour of Catalonia as the young Spaniard took second place, marking the biggest achievement of his career to date.

Ayuso had started out trailing Mark Zoller, who led the advanced pack in the last few kilometers of the race, before falling behind Ben O’Connor who took first place in the stage race.

With 500 meters to go, Ayuso advanced alongside his teammate Joao Almeida, who finished fifth in the mountain stage of a 161.1 km route between Perpignan and La Molina.

Thanks to his victory, Ayuso advances to second place in the general classification, 10 seconds behind his rival O’Connor, who heads the standings. Ayuso will participate tomorrow in the fourth stage, which will be held on a 166.7 km track. wearing the white jersey of the best young rider.

Commenting on his victory, Joan Ayuso said: “It was a tough race, especially on the last climb where we had strong winds.” I think my rival O’Connor had a perfect time in the sprint, as I tried to catch up with him and overtook him about three times, but I couldn’t close the gap between us, so I congratulate him on his deserved win. Now I will focus on the next stages of the round, and I will do my best tomorrow to try to win despite the difficulty of the stage.

At the Kobe & Bartali Grand Prix, Diego Ulisse and teammate Mark Hershey cracked the top ten, taking sixth and seventh place, respectively, in a race that saw Camilo Ardella launch into a solo attacking performance. in the final kilometers of the race. which was contested on the 169.9km course between Riccione and Longiano, before the main group caught up with him in the last 500m from the finish, with Ethan Hayter (Inios-Grenadiers) winning.