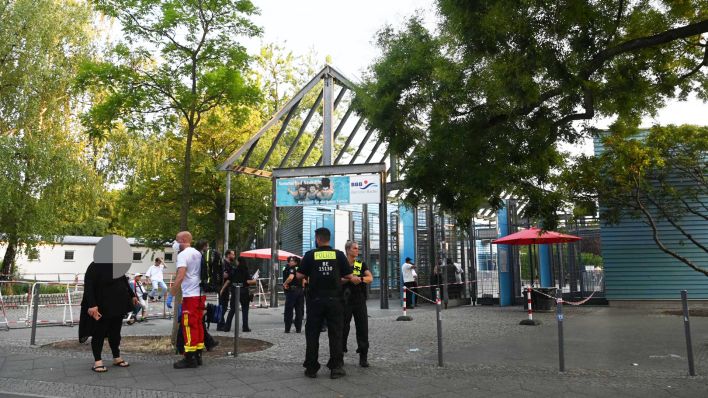 Eleven injured, three provisional arrests – this is the result of a violent open-air confrontation which took place on Tuesday in Neukölln. The police are investigating due to a particularly serious breach of public order – and are showing an increased presence in the toilets.

Eleven people were injured in an argument between bathers and security personnel in the Columbiabad in Berlin-Neukölln. Three of them were taken to hospital for observation, Berlin police said on Wednesday. Three men aged 19, 23 and 24 have been provisionally arrested.

According to the Berlin police, among the eleven injured aged 15 to 49, six bathers, four security guards and a first-aid worker were injured following the use of irritant gas. Two men also said they were punched in the face.

The group was expelled for fighting

According to police, Tuesday night’s row arose when a total of a dozen people were kicked out of the outdoor pool due to a fight. They returned a little later – some over the fence – and, according to witnesses, specifically attacked three security guards, police said. The attackers also used tear gas.

The security personnel would have taken refuge in the tower of the outdoor swimming pool; According to the police, the attackers tried to force the door. When the police arrived, they were able to arrest three suspects in a car. Officers found a truncheon, a baseball bat and a knife on them.

It is now determined due to a particularly serious breach of the peace.

The police secure the operation of the outdoor swimming pool

In the aftermath of the Neukölln incident, the chairman of the board of directors of the Berlin bathing society, Johannes Kleinsorg, announced that the police had agreed to provide immediate support “to secure the operation of the outdoor swimming pool”.

It also started on Wednesday, a Berlin police spokeswoman told rbb on Wednesday afternoon when interviewed. Task group forces are now patrolling around the Columbiabad grounds and also in the pool itself. Twelve forces were deployed on Wednesday, it was said. They also have the Prinzenbad in view. In addition, there is now a mobile guard in the entrance area of ​​the Columbiabad – manned by three other policemen. “We are showing presence,” the spokeswoman said.

“In addition, pool companies in Berlin will once again increase the use of outdoor pool safety specialists,” Kleinsorg continued. In standard operation, two to six security forces are deployed, depending on the size of the respective pool, a pool operations spokesperson specified at the request of rbb. However, this number will be increased significantly as needed – currently in Neukölln at around 16-20 people per day.

Not the first incident this year

There have already been several violent clashes in outdoor swimming pools in Berlin this summer. end of June 250 people were involved in an argument in the Neukölln summer swimming pool and a woman’s nose was broken.

A week earlier there had been a mass brawl with around 100 people on the island of Steglitz, and the police had to arrive with 13 emergency vehicles.

The Berlin bathing establishments then affirmed that there was no fundamental problem of safety in the summer baths. It’s just “a small part of outdoor pool life,” pool spokesman Matthias Oloew told rbb.

Previous articleTruss and Sunak will contest Boris Johnson’s succession as Conservative leader and British Prime Minister
Next articleApple iPad (2021): you can buy the cheapest tablet on eBay thanks to the discount code