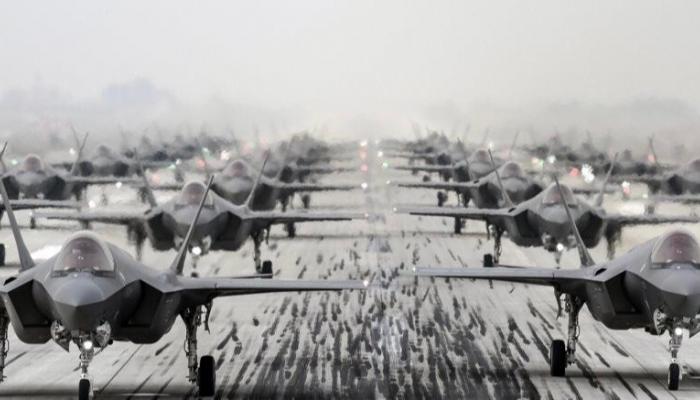 South Korea’s Defense Ministry revealed its weapons stockpile, which represents the deterrent force for ballistic missiles from its northern neighbor.

According to the South Korean news agency (Yonhap), the country has a group of American F-35 fighters, which show combat readiness after North Korea launched an intercontinental ballistic missile.

US F-35 stealth fighters can land vertically; fly from a 500-foot runway, not just an airport; You can also avoid radars, and fly long distances, without refueling.

The plane has an estimated speed of Mach 1.6 (1,960 kilometers per hour), a flight range of 2,200 kilometers and is capable of carrying 16 tons of ammunition.

On Thursday, the South Korean military said it had conducted a live-fire test of several ballistic and tactical missiles immediately after it said it was the launch of an intercontinental ballistic missile from North Korea.

North Korea’s weapons arsenal grew rapidly under Kim Jong Un’s leadership, especially its nuclear program and missile fleet; This expansion posed a growing threat to the United States and its allies in the region.

North Korea has used nuclear weapons as its biggest bargaining chip and has built more powerful ballistic missiles that can carry nuclear warheads. The country conducted six increasingly sophisticated underground nuclear tests between 2006 and 2017. The last four of them were during the Kim Jong-un era.

According to an estimate by the Arms Control Association, in January North Korea had 40 to 50 nuclear warheads and could produce enough fissile material for six to seven bombs a year.

In 2017, Kim claimed that his country was capable of launching a nuclear attack on the continental United States. North Korea tested two Hwasong-14 and Hwasong-15, the first intercontinental ballistic missiles that year.

It also launched its Hwasong-12 medium-range ballistic missile over Japan and threatened a “encirclement” attack on the US island of Guam.

After 2017, Kim halted nuclear weapons and long-range missile tests, but threatened to end that suspension when talks with the Trump administration collapsed in 2019.

It is unclear whether North Korea has mastered the technology needed to send an intercontinental nuclear warhead into space and then guide it through Earth’s atmosphere to its target.

The Hwasong-17, North Korea’s largest ballistic missile, was first unveiled during a military parade in October 2020 but never tested.

The UN Security Council has adopted several resolutions banning North Korea from continuing its nuclear weapons and ballistic missile programs, which it says it needs to defend itself.