“El Clásico”… Barcelona to demonstrate its development against Real Madrid 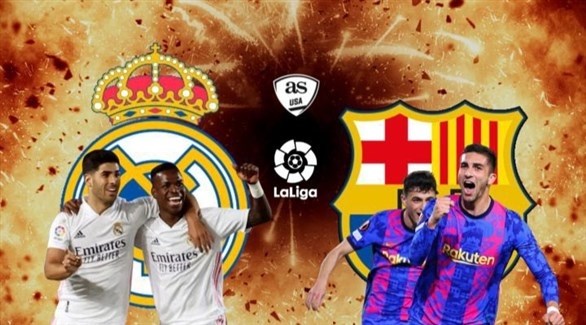 Spanish team Barcelona is a big guest against arch-rival Real Madrid in a fierce “Clásico” today, Sunday, at the Santiago Bernabéu, at the top of matchday 29 of this season’s Spanish La Liga competition.

Real Madrid enters tonight at the top and is at the top of the Spanish league table with 66 points from 28 games, a difference of 10 points with Sevilla, the second classified with 56 points.

Barcelona occupies third place in the LaLiga standings, with 51 points from 27 games played in the competition so far this season.

Real Madrid, led by coach Carlo Ancelotti, is looking to win and add the three points to get one step closer to crowning the title and overcome their traditional rivals.

The ‘Royal’ team are looking to continue their victories in the Spanish League this season, the last of which came against Real Mallorca at home, 3-0, on matchday 28 of the La Liga competition.

French striker Karim Benzema is absent from Real Madrid against Barcelona, ​​due to not recovering from the injury he suffered to the sole of his left foot during Mallorca’s last match in the Spanish League, and Ferland Mendy is also absent due to injury .

On the other hand, Barcelona plays the ‘Clásico’ in high spirits after qualifying for the quarterfinals of the European League, after beating Galatasaray by two goals against one goal, in the second leg of the 16 round of 16 end. the Europa League.

The Catalan team hopes to continue with the great results they achieved under the guidance of coach Xavi Hernández, as they kept their unbeaten record in the last 11 games in all competitions by winning 8 times and drawing 3 games, and the players scored 28 goals and the The team received only 10 and kept a clean sheet in 4 games.