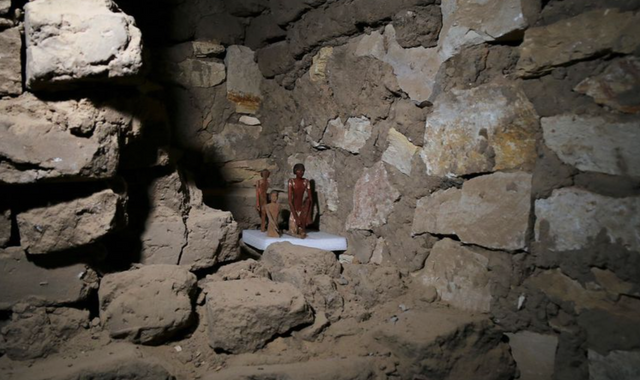 Archaeologists have discovered five ancient tombs decorated with well-preserved paintings in a cemetery in Egypt.

The tombs belong to high-ranking officials from the Old Kingdom and the First Intermediate Period, dating back more than 4,000 years, the Ministry of Tourism and Antiquities said.

Located near the pyramid of King Merenre I, at Saqqara, just outside the Egyptian capital Cairo, they also contained large stone coffins, wooden coffins, and other artifacts, including small statues and pottery.

Saqqara, which is located south of the Great Pyramids of Giza, has provided a wide variety of archaeological discoveries in recent years.

Mostafa Waziri, head of Egypt’s Supreme Council of Antiquities, said the five tombs were in good condition and appeared to have belonged to high-ranking officials, including regional rulers and palace overseers in ancient Egypt.

He said: “All those five tombs are well painted, well decorated. The excavations did not stop.

“We plan to continue with our excavations. We think we can find more graves in this area.”

The Ministry of Tourism and Antiquities added one of the tombs belonging to a high official named Iry and it contained a limestone sarcophagus and colorful decorations inside.

The other tombs belonged to members of the royal court, including a woman named Petty, who was responsible for the beautification of the king and also the priest of Hathor.

In January 2021, Egypt revealed more ancient treasures found at Saqqara, including more than 50 wooden sarcophagi dating back to the New Kingdom in the 16th to 11th centuries BC.

Later this year, Egyptian authorities plan to open the new Grand Egyptian Museum near the Giza Plateau after its opening was delayed due to the pandemic.