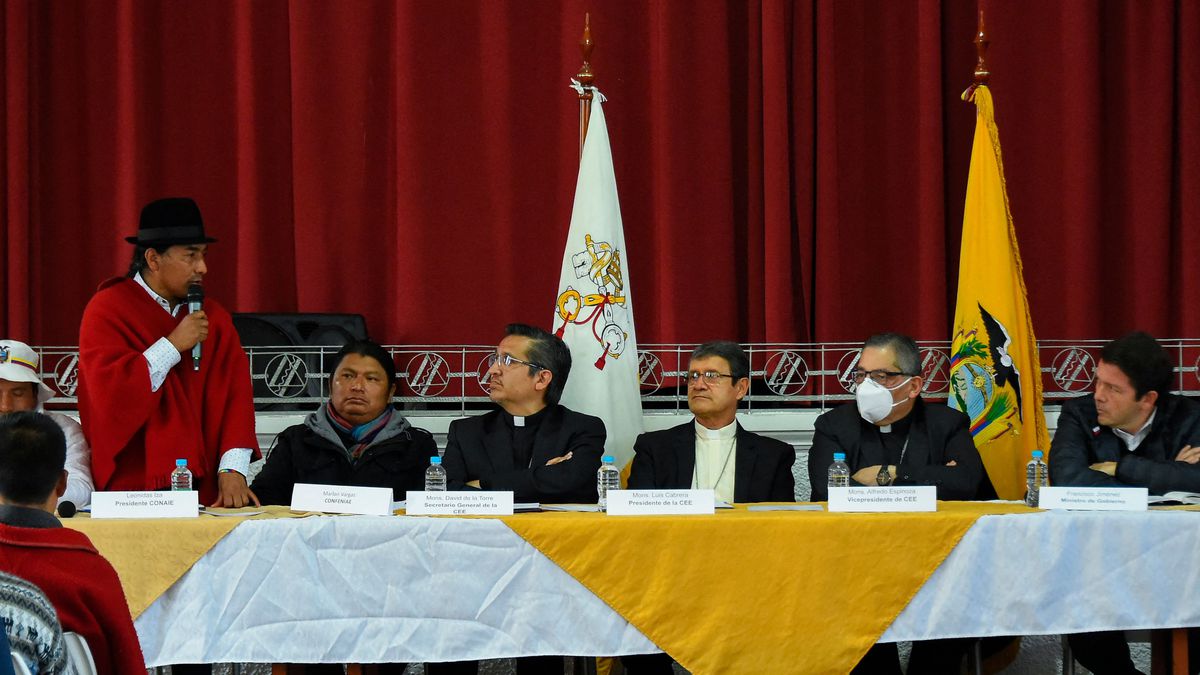 A single day passed from the march of the indigenous people with spears through the center of Quito on Wednesday to the symbolic burial of the weapons with a peace document. The government and leaders of the organizations this Thursday sealed a televised agreement that puts an end to the 18-day protests and includes the transfer of part and part, mainly related to fuel. What has finally brought peace to Ecuador is the official pledge that the public purse will cover the cost of 15 cents of a dollar per gallon of the three most consumed gasolines.

The end of the demonstrations took place in the afternoon after internal indecision among the representatives of the municipalities over the points of the agreement in the morning. The new approach had been forged since the night before, when Government Minister Francisco Jiménez and the President of the Confederation of Indigenous Nationalities, Leonidas Iza, released two videos reaffirming their willingness to renegotiate before mediation by the Catholic Church in Ecuador.

The consensus sets a period of 90 days to verify whether or not the points of the agreement are being met. The government promised to change laws such as repealing Decree 95, which allowed private investment to be received in the state’s oil activities, and reforming Decree 151 on mining. In doing so, he responded to the demand to always conduct a referendum in the surrounding towns before starting mining activity and to limit this type of resource exploitation in protected areas, ancestral territories and areas considered as water sources. In addition, he agreed to lift the last state of emergency imposed a day before peace was declared in four neighboring provinces of Quito, precisely because a few hours ago no agreement was expected to be reached.

The social conflict faltered after an initial attempt at dialogue, and after nearly three weeks of demonstrations, roadblocks and clashes with security forces, Ecuador remained paralyzed, tense and with an increasingly apparent social division. The government had relented on one of the most controversial issues, petrol, but not enough compared to what indigenous organizations were demanding. The protest aimed to subsidize 40 cents of a dollar for every gallon of diesel, extra and ecopaís – gasoline for general use and transportation – sold to the consumer. Ecuadorian President Guillermo Lasso only agreed by decree that the state would take 10 cents of what the consumer pays and allocate $266 million a year for the subsidy.

But last Monday’s talk, which attempted for the first time to make peace, was cut short that same night by the death of a soldier in a confrontation with community members in the middle of the Amazon. The next day, the government broke off the dialogue, leaving the chairs at the negotiating table empty and delegitimizing Leonidas Iza as an interlocutor. The most prominent face of the protests could finally be present at the signing of the peace accord this Thursday, and finally became decisive when one of the other two tribal representatives who had to sign the agreement relented and demanded additional details. The noise made it impossible to hear exactly what was missing, but Iza took the microphone and, alluding to the weight of their organization, warned that the Pact could go ahead without him.

“Here the three organizations stayed and we didn’t look at who had more or fewer people,” he announced officially and through church mediation, to the amazement that Gary Espinoza of Fenocin (another organization representing rural communities, indigenous people and Blacks) refused to sign the paper declaring the conflict settled. “We are making great efforts to maintain unity, but let it be clear, comrades, if the Fenocin does not want to recognize this victory, leave it blank.” Moments later, everyone applauded, standing in front of the public and with the attention of all Ecuador hands raised in victory. The protests have been suspended and protesters have been asked to gradually return to their communities.