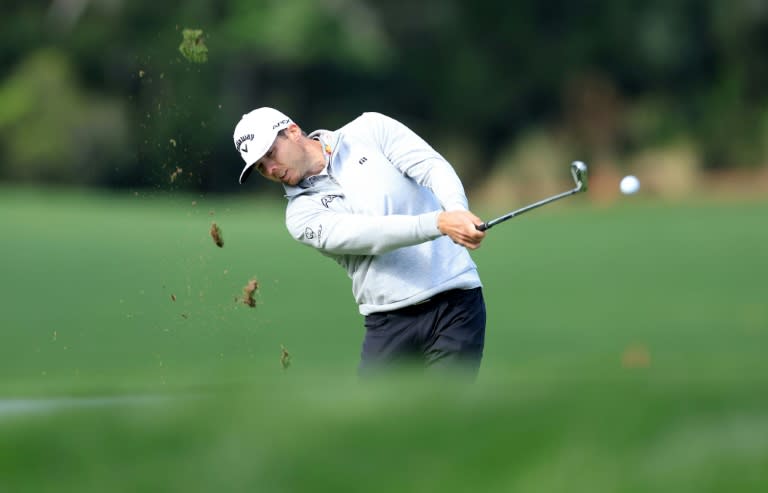 Sam Burns rolled in a 76-foot eagle putt en route to a three-under-par 69 on Sunday to grab a chunk of the second-round lead alongside Tom Hoge in the weather-disturbed Players Championship.

Two days of torrential rain followed by strong winds on Saturday mean the US PGA Tour’s flagship event won’t end before Monday at the earliest.

As the second round ended, with the third round scheduled to start shortly after on Sunday, Burns and Hoge were seven under, one stroke ahead of Harold Varner and South African Erik van Rooyen.

England’s Tommy Fleetwood, who had shared the first-round lead with Hoge after the two had been among the players to finish 18 holes on Thursday, topped a group at five under par.

Hoge was one of 24 players whose second-round start was postponed until Sunday after gusty winds delayed play.

After two days of inactivity, he said it took a while for him to warm up in the cold conditions in the morning.

“I just tried to find a rhythm,” he said. “He put in a few holes to get back into the swing of things.”

Hoge was philosophical about the task that still remained.

“It would be nice to be standing here on Sunday afternoon holding the trophy, he said, but we’ve got 36 holes to go.”

At least he and Fleetwood missed the worst of the weather, thanks to their tied start time.

But Fleetwood also took some time to warm up.

“I had a bit of a rocky start,” he said. “I didn’t play too bad, just the ups and downs I did on Thursday I didn’t do a couple of early ones. It was nice to settle down and make a couple of birdies,” said Fleetwood, who posted a one. -over 73.

Burns kept his share of the lead with a par-saving putt on the 18th. He said it was nice but it couldn’t compare to his eagle on the 16th.

Burns also missed windswept action on Saturday thanks to his draw.

“I felt bad for the guys that had to play,” he said. “You never wish that on your opponents. It’s unfortunate. Throughout your career, you have good waves and bad waves, but it still sucks to watch.”