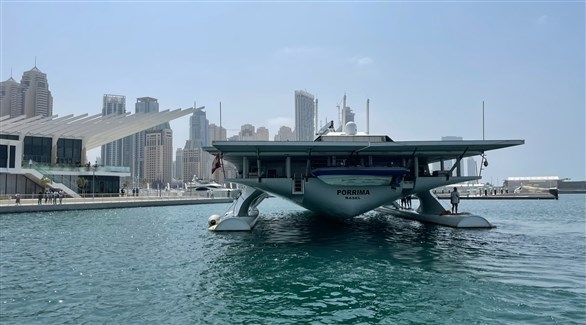 The promenade of the port of Dubai has announced the reception of the Swiss ship “Purima”, which operates solely on renewable energy sources, as the ship will go on a grand tour around the world under the name “Blue Odyssey”, during which will sail across five continents


Purima is the first ship of its kind in the world to run solely on solar, wind and hydrogen energy, and the ship chose the port of Dubai as the second stop on its journey, during which it has traveled more than 11,000 kilometers non-stop so far. from leaving the Japanese city of Osaka on December 18, 2021.

Once in Dubai Harbour, Purima will dock at the Harbor Marina, adjacent to the Dubai Harbor Yacht Club, where it will showcase a wide range of proven renewable energy technologies on board.

Interested young people will also be invited to join the “Blue Forum” that will take place on board the ship to learn about next generation solutions in the field of innovative and sustainable marine technology, which will help refine and improve their skills. in this field with the aim of developing more sustainable marine industries and promoting the preservation of natural resources.

Abdullah bin Habtoor, Commercial Director of Shamal Holding, owner and developer of the Dubai Port, said: “We are very pleased to welcome the Burima ship on its third voyage around the world, which is a shining example of how the combination of technology and sustainability contributes to addressing the environmental challenges facing our world today.

During its voyage, which will come to an end on the opening date of Expo 2025 Osaka, “Purima” will seek to supply nearly 12 new and innovative technologies as it will dock at many ports around the world to demonstrate how to address many current challenges. such as pollution and climate change using commercially viable renewable energy technologies.

This project responds to the call of the Japan Association for World Expo 2025 to move towards building an “ideal future society” by launching a wide range of initiatives aimed at achieving this goal.

sustainable boat
The ship is named after the Roman gods of the future “Purima”, and is the first ship to go around the world using only solar energy, under its previous name “Solar Planet”. The ship, 36 meters long and weighing 100 tons, uses solar, wind and hydrogen energy, as well as artificial intelligence and technologies inspired by nature. The ship also simulates the mechanism of action of the lungs to purify the blood of carbon dioxide to clean seawater and isolate and destroy plastic particles, making it the only ship certified to produce and consume hydrogen in the world. world.

The Purima ship will depart from the port of Dubai on March 31, 2022, coinciding with the conclusion of Expo 2020 Dubai, to continue its journey around the world.

- Advertisement -
Share
Facebook
Twitter
Pinterest
WhatsApp
Previous articleBack to mainstream politics: Andrea Nahles is scheduled to start as BA’s new boss on August 1
Next articleTebboune: French “colonial crimes” in Algeria will not be subject to prescription