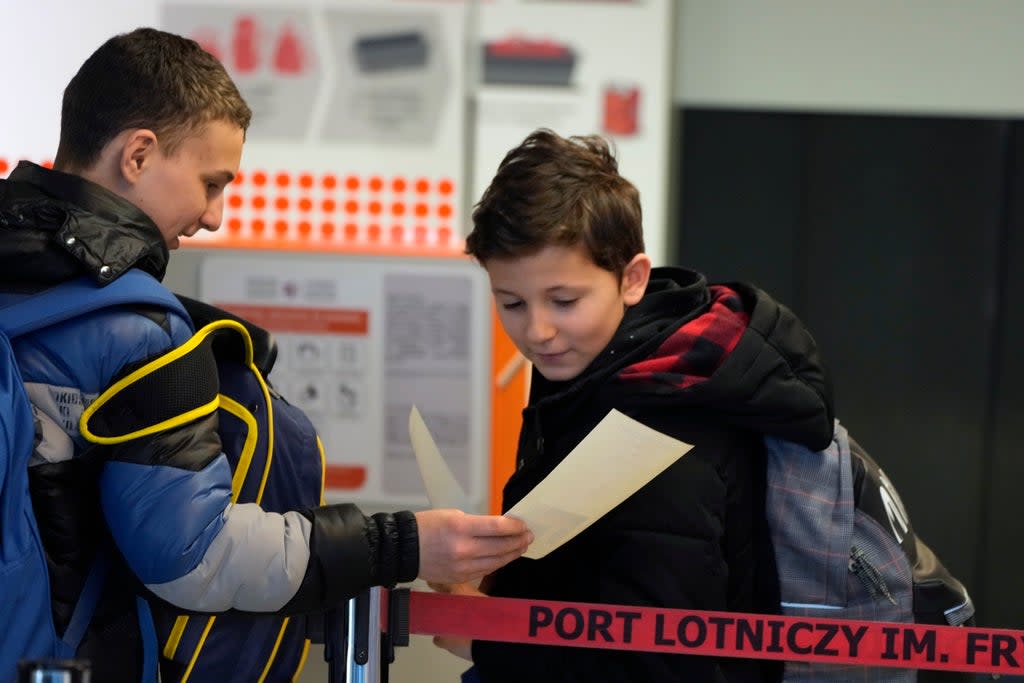 Dozens of Ukrainian orphans clapped and cheered as their plane landed in the UK.

The 54 children from the orphanage, including a one-year-old and a two-year-old, along with seven legal guardians, landed at Heathrow Airport on Wednesday night.

The group was flown to Scotland where they will be temporarily housed.

The operation, which was a combined effort by Magen David Adom UK, Save A Child and Dnipro Kids charities, saw children rescued from five orphanages in an evacuation dubbed “Project Light”.

The group left Warsaw in Poland on Wednesday afternoon on a Virgin Atlantic flight after they were evacuated from Ukraine more than a week ago.

Sally Becker, founder of Save A Child, was on the plane and reflected on the moment she landed in London.

She told the PA news agency: “Well, everyone clapped. First they looked out the windows and they could see the lights.

“And I was saying ‘It’s London! It’s London!’ And they looked completely amazed because, of course, they had never flown before, and they really did look like jewels in the night.

“And when he landed, everyone started clapping. But not like people clapping on an ordinary flight that sometimes happens, there were 61 of them clapping and cheering, and they were very happy.”

Ms Becker added: “The main thing is that they are here, they have a sanctuary, a temporary sanctuary and they are safe.

“But thousands more were left behind, I don’t necessarily mean orphans, although there are orphans, but ordinary children, children who are being bombed, who are being shot, and I just hope that we can help a lot more children.”

Ms Becker said the group of 54 includes two young women, one 19 and one 21, who are connected to one of the orphanages.

“And you can’t officially be part of an orphanage once you turn 18. But for all intents and purposes, those girls see everyone as their brothers and sisters.

“And the mother of the orphanage, the guardian, she calls mother, and they were going to stay behind.

“So last night we quickly managed to find a sponsor in Scotland who were connected to Dnipro Kids who said ‘You can use me as a sponsor’ and then we asked the British Embassy, ​​the Home Office to do everything they could to absolutely pull out all the stops. to expedite visas.

Ms Becker said the visas were ordered on time, adding: “I don’t know how the British embassy did it, but they did.”

Scotland’s First Minister Nicola Sturgeon tweeted a message of welcome to the children, writing: “A warm welcome to Scotland @DniproKids – I know you would rather be home in Ukraine but here you will find love, care and support for so long.” . as long as you need it.”

Speaking about the arrival in London, Magen David Adom UK chief executive Daniel Burger said there was “total jubilation, a celebration” and described it as a “wonderful and uplifting experience”.

He told the PA news agency: “It’s great. It was a truly surreal and fabulous experience that I am privileged to have been able to play a small part in today.”

“Save a Child and various other parties have made the most incredible effort to get these children to safety.

“When the call came to try to help bring them to the UK, we wanted to do whatever it took.

“This gigantic operation has only been possible thanks to the generosity of so many people,” he said.

“We congratulate our partners, MDA UK and Save A Child, for the incredible work they have done to bring these children to safety.

“We will continue to look for ways to use the power of our people and aircraft to support the humanitarian relief effort in Ukraine and will be ready to act when the opportunity arises.”

The fuel for the Virgin Atlantic flight was donated free of charge by Esso Petroleum, and the outbound leg of the flight contained five tons of Convoy of Hope aid.

The Ukrainian and Polish governments granted permission to fly to the group.

Home Secretary Priti Patel tweeted about the group’s arrival and thanked her team at the Home Office, Ukrainian and Polish authorities, the Scottish government and Virgin Atlantic.

“The care they will receive will go some way to healing their suffering,” he said.

SNP Westminster Leader Ian Blackford MP said: “This is a deeply emotional moment for all involved as the Dnipro Kids finally arrive in Scotland where they will be safe, secure and well cared for.

“As delighted as I am to see them arrive at sanctuary in Scotland, we all hope that this will be a temporary stay and that peace will soon come to Ukraine so that they can return safely as they wish.”