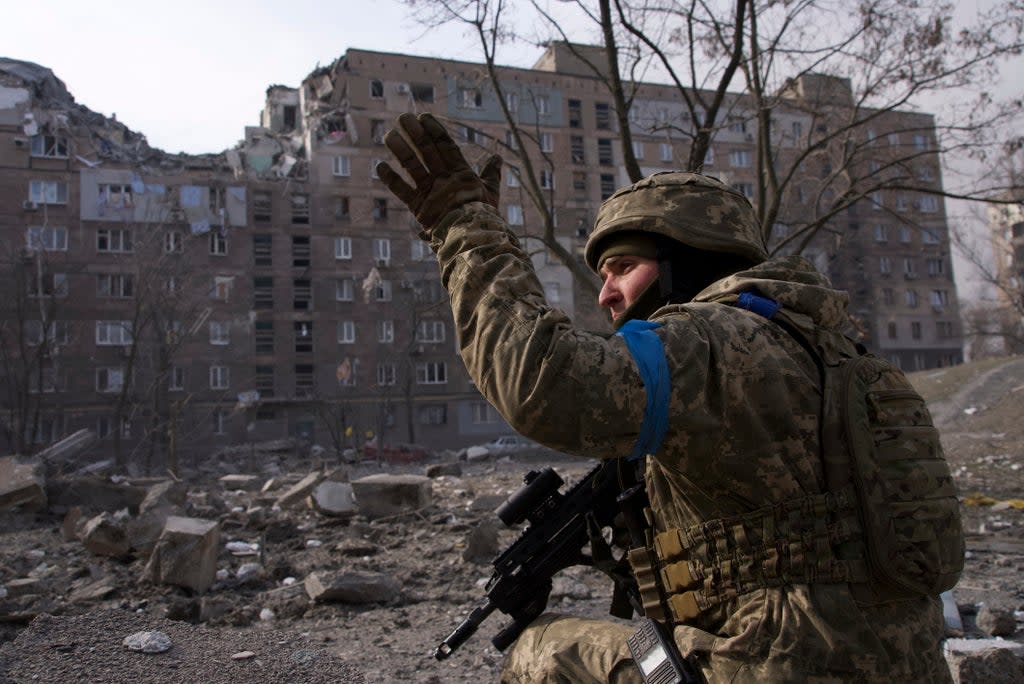 Dozens of people were killed yesterday in a missile strike near Ukraine’s border with NATO member Poland, in the most westerly strike ever carried out by Russian forces.

More than 30 missiles aimed at a training center in Yavoriv, ​​less than 25 kilometers (15 miles) from the Polish border, according to the governor of Ukraine’s western Lviv region. More than 130 people were injured.

It also marked new Russian attacks in western Ukraine. Since its invasion, Lviv has largely been spared the scale of destruction unfolding further east and has become a destination for residents fleeing bombed-out cities and for many of the nearly 2.6 million refugees. who have fled the country.

The training center appears to be the westernmost target hit so far in the 18-day conflict. Poland is also a transit route for Western military aid to Ukraine. An attack so close to the border is loaded with symbolism in a war that has revived the Cold War rivalries that gave birth to NATO and threatens to rewrite the current global security order.

Russia claimed to have killed “up to 180 foreign mercenaries” and destroyed a large number of weapons supplied by foreign nations in the attack.

The facility, also known as the International Center for Peacekeeping and Security, has long been used to train Ukrainian military personnel, often with instructors from the US and other NATO countries. It has also hosted international NATO drills.

Poland’s President Andrzej Duda told the BBC on Sunday that he believes Russia could use chemical weapons as Vladimir Putin is in “a very difficult situation”, adding that it would be a “game changer”.

“In reality, politically he has already lost his war and internally he is not winning it,” he added.

“For sure the North Atlantic alliance will have to sit at that table and really have to seriously think about what to do, because then it starts to be, not only for Europe, or our region, but for the whole world.”

Regardless of Russian threats about sending Western weapons to Ukraine, the Czech Republic announced on Sunday that it would send a further £24m of military aid to Ukraine.

Russian fighters also continued to attack an airport in the western city of Ivano-Frankivsk, less than 150 kilometers (94 miles) north of Romania, another NATO country.

Fighting also broke out in multiple areas of the country on Sunday. Ukrainian authorities said Russian airstrikes on a monastery and children’s resort in the eastern Donetsk region hit places where monks and refugees were sheltering, wounding 32 people.

Another airstrike hit a westbound train evacuating people from the east, killing one person and wounding another, Donetsk’s chief regional administrator said. To the north, in the city of Chernihiv, one person was killed and another wounded in a Russian airstrike that destroyed a residential block, emergency services said.

Around the capital, Kiev, fighting also intensified, with overnight shelling in northwestern suburbs and a missile strike destroying a warehouse. Chief regional administrator Oleksiy Kuleba said Russian forces appeared to be trying to blockade and paralyze the capital before any full attack.

“We are preparing to defend Kiev and we are prepared to fight for ourselves,” he said.

On Saturday, Ukraine’s President Volodymyr Zelensky said Russia would have to raze the city “to the ground” to capture it.

Brent Renaud, an American journalist, was killed in clashes on Sunday. Award-winning American filmmaker and former contributor to the New York Timeswas shot dead by Russian forces in Irpin, near the capital, Ukrainian authorities say.

Elsewhere, Russian soldiers looted a humanitarian convoy trying to reach the battered and surrounded port city of Mariupol, where 2,187 people have so far been killed in fighting, a Ukrainian official said on Sunday.

The Ukrainian military said Russian forces have captured the eastern outskirts of Mariupol, tightening their siege on the strategic port. Taking Mariupol and other ports on the Sea of ​​Azov could allow Russia to establish a land corridor to Crimea, which Ukraine seized. in 2014.

Many civilians have been caught up in the shelling, and Ukraine’s prosecutor general’s office said on Sunday that at least 85 children have been killed across the country in the war so far.

President Zelensky accused Russia of trying to divide his country, as well as starting “a new stage of terror” with the alleged arrest of a mayor of a city west of Mariupol.

“Ukraine will withstand this test. We need time and strength to break the war machine that has come to our land,” Zelensky said during his late-night address to the nation on Saturday.

In Italy, one person has died and several have been injured after a bus carrying 50 Ukrainians overturned.

In his Sunday speech at the Vatican, the Pope called on Russia to stop its invasion.

“In the name of God, I ask you to stop this massacre,” he said.