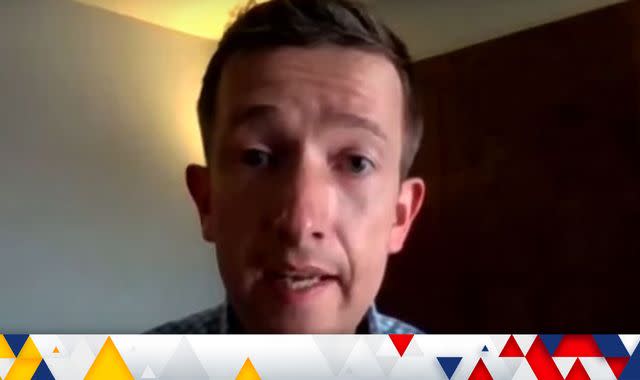 A doctor who led a medical team that evacuated 21 Ukrainian children with cancer to the UK for life-saving treatment told Sky News of the “feeling of relief” among families over the rescue mission.

The children who were being treated in Ukrainian hospitals when Russia invaded the country and their immediate family members arrived from Poland on Sunday night.

Dr Michael Griksaitis, a consultant pediatrician who specializes in critical care at Southampton University Hospital, said his team had been “privileged and honored” to bring the children back to the UK.

Speaking to Kay Burley on Sky News, she said: “They started out obviously scared. Some of the stories of what these kids had been through, I can’t even begin to imagine.”

“Having that alone is bad enough for anyone, but having that while undergoing cancer treatment, it was just astronomical.

“When the plane took off, there was almost a sense of relief that these families knew that their children were going to receive treatment and that they had a chance of surviving cancer.

“And indeed, upon landing, the kids who weren’t initially making eye contact and were terrified were high fives, playing games and smiling.”

In other Ukrainian developments:

He added: “This was an amazing collaboration across all parts of the NHS. Mainly at the frontline children’s hospitals who were able to put together an intensive care transport team made up of oncology colleagues trained by Southampton University Hospital and Children’s Hospital Birmingham.

“This all happened pretty quickly, pretty efficiently, and it was actually quite an emotional experience.

“We were privileged and honored to be able to help them get out of the country and into England and the UK where we were able to provide ongoing support because without this ongoing care they would die.”

The age range of the children was “wide”, from infants to teenagers, with some described as seriously ill.

Health Secretary Sajid Javid said: “I am proud that the UK is providing vital medical care to these Ukrainian children, who were forced to leave their home country by the Russian invasion while receiving medical treatment.”

Meanwhile, a plan is being launched today for people in the UK to house Ukrainian refugees in their spare rooms for at least six months in the hope that people can start hosting within a week.

People interested in offering refugee shelters in the UK will be able to register their interest in sponsoring Ukrainians through the government’s new humanitarian scheme from today.

Read more: Tens of thousands of Ukrainian refugees could come to the UK, with funding of £10,000 per individual

Britons participating in the “Homes for Ukraine” program will receive a “thank you” of £350 a month from the government.

Leveling Up Secretary Michael Gove said the process of matching Britons with people fleeing the conflict will take place from Friday.

On Sunday, it was revealed that more than 3,000 visas had been issued to Ukrainians seeking refuge in the UK, with “tens of thousands” potentially poised to benefit from the new humanitarian scheme.

Mr Gove also announced that local authority areas would be entitled to more than £10,000 for each Ukrainian refugee using the new route to the UK.

He told Sky News: “For every person who comes in, just over £10,000 per person will be made available to local authorities.

“And then there will be additional payments for those children who are of school age and need to be accommodated within the educational system.

“Everyone will have access to full NHS care, including mental health.”

Boris Johnson has confirmed that the UK will supply Ukraine with more than 500 portable generators to help ease the power cuts currently crippling the country.

The generators will provide power for essential services, including hospitals and shelters, generating enough power to power 20,000 homes.

The prime minister is preparing to embark on a series of meetings with Nordic and Baltic leaders this week as he seeks to bolster European resilience following the Russian invasion of Ukraine.

During this week’s Joint Expeditionary Force (JEF) summit in London, he will urge leaders to work together to ensure that no other nation falls victim to President Vladimir Putin’s aggression, Number 10 said.

Mr. Johnson will host the group for dinner at his official country residence, Checkers, tonight.

The coalition will then meet in London on Tuesday, before the prime minister joins the leaders of Finland and Sweden in Downing Street in the afternoon.