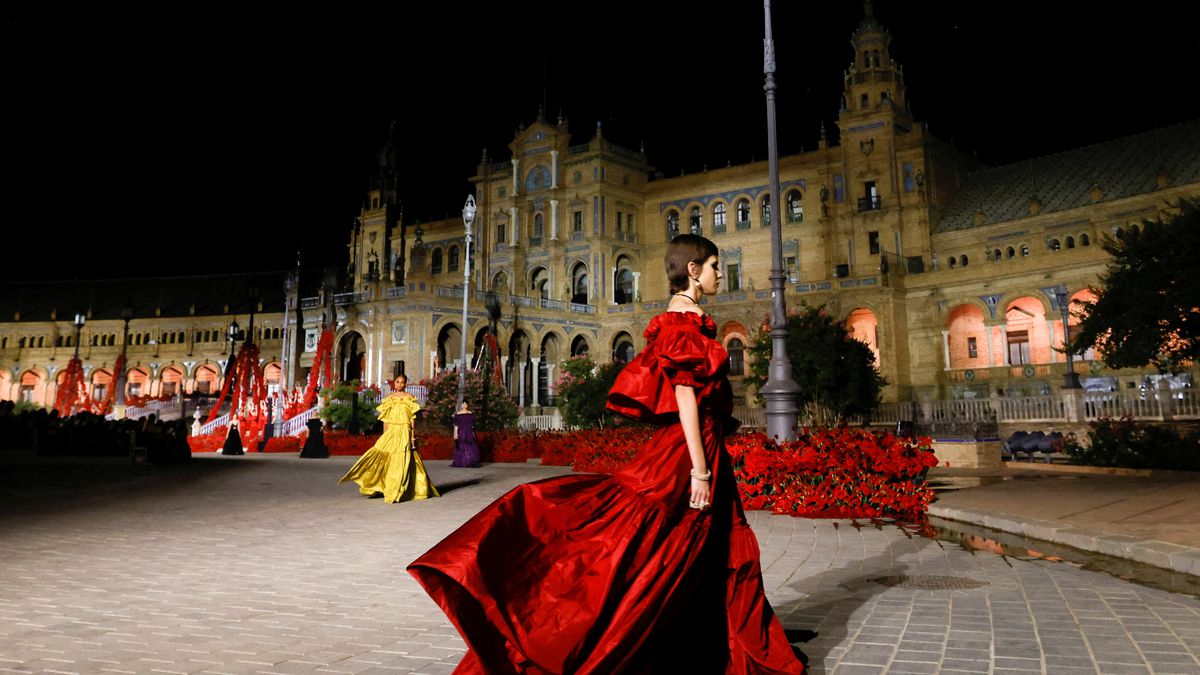 The sun was barely visible on the Plaza de España in Seville at quarter past ten on this Thursday evening. In its place, a red cloak of half a million carnations and red roses lined the steps of this space, designed by architect Aníbal González in 1929. The Andalusian capital had been waiting weeks for the date with Dior, and not even the heat. Neither the muffled 900 visitors nor the impossible traffic following the Corpus Christi procession managed to lessen the level of expectation a moment ago for fashion history. As the lights came on and the Betica Chamber Orchestra played the first chords of music created by Alberto Iglesias for Pedro Almodóvar’s cinema, the French brand became the first international company to stage a parade in Spain with a global appeal.

A milestone achieved by the creative director Maria Grazia Chiuri – the first woman to hold this position since the company was founded by Christian Dior in 1947 – for the 2023 cruise collection, which was staged in front of an audience listening in dead silence to the group of in Dancers dressed in red saw descending the steps of the emblematic square. As the chimes of the Bailaores Belén López and El Yiyo broke the silence with a tribute to the Bailaora, singer and actress Carmen Amaya, the first of the 110 models began the long journey down the catwalk-converted plaza. She wore a black and white Manila scarf, showing that Seville was not only the continent but also the content for such an event.

“It’s not that I’m the first designer to discover Spain as a place of inspiration, that’s all that would be missing,” admitted Chiuri from behind the scenes. “Very few countries come to mind with such a deep-rooted design tradition and with designers like Cristóbal Balenciaga in their history. But I think it was time to do it and also to pay tribute to an essential guild of artisans, without which the traditions would remain dead letters,” explained the designer.

Seville is the sixth stop for Chiuri’s cruise collections since joining the company in July 2016. The voyage began in Los Angeles (USA) in 2017 and, after stops in Chantilly, Marrakech, the Italian city of Lecce and Athens, was the formula of the Designers has been consolidated with the premise she describes herself: collaborating with the artisans of the places where her proposals end up.

Days before the parade, the Dior team visited religious temples such as the Macarena Basilica, or the Sanctuary of the Gypsies, or the Brotherhood of the O, where the most precious relics of the Sevillian brotherhoods are kept, and workshops such as the Orfebrería Ramos (specializing in jewelry and restoration), the Fanhaus Carbonell or María José Sánchez Espinar, the third generation of women experts of the Manila cloth, became accomplices of what was shown this Thursday on the catwalk to the rhythm of the orchestra’s violins or the music of Rosalia These were not literal references, let alone : If the embroideries of the artisan Jesús Rosado flooded a suit of lights rarely seen in a bullring, the ruffles of the exploited flamenco dress caught the attention of an audience as diverse as Chiara Ferragni, María del Monte, Marta by their absence Ortega or Elle MacPherson. Instead, key pieces of the Andalusian fantasy such as the short men’s suit or the equestrian wardrobe have been updated for the light and modern garments that Chiuri has been defending at Dior for more than five years.

The connection between Dior and Spanish culture goes back much further. Already in his first collections, his founder baptized some of the sketches of his suits with names like e.g Nights of Spain (1954), Soiree in Toledo (1955) or ball to Seville, from 1956, the same year as an image of the designer in a flamenco tablao in Granada with a group of dancers and his partner Jacques Benita. Dior soon put his fondness for Spain into action, taking his designs through charity galas, the first at the Ritz Hotel in Madrid in 1955, orchestrated by the Duchess of Montpensier.

But what is still remembered most is that organized by Cayetana de Alba at the Liria Palace in 1959, two years after the death of the founder of the a house, with a very young Yves Saint Laurent among the more than 2,000 guests who watched a hundred garments worn by high society ladies parade by. “Both this event and that of 1967, already with Marc Bohan as designer, were not passports with a global vocation, but as social events for the local market,” says Miquel Martínez, one of those responsible for the exhibition. In Madrid. A History of Fashion (1940-1970), suspended until last May. All in all, it would be John Galliano who would take a more folksy take on Andalusian culture, using designer Lina Fernández to weave the ruffles for his 60th anniversary parade, where he would wear a bullfighter’s suit himself.

“All countries have to deal with their issues. But there’s some truth in them,” Chiuri revealed this week. The main novelty of this collection, however, was to delve into the roots of Andalusian craftsmanship without resorting to the mere appropriation of its most ingrained symbols.

- Advertisement -
Share
Facebook
Twitter
Pinterest
WhatsApp
Previous articleIn the face of a hypothetical attack from Belarus, Zelenskyy orders the ranks in the north of the country to be checked
Next articleLogista buys 60% of Transportes El Mosca for a maximum of 106 million and enters maritime transport