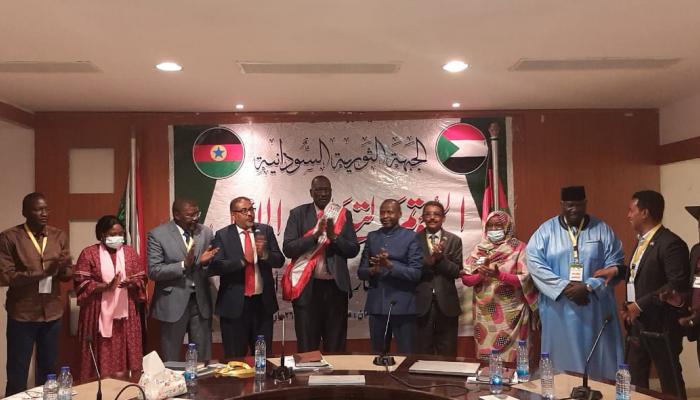 The Sudan Revolutionary Front said on Sunday that the military component is a partner in the success of the December revolution and in managing the transition period under the constitutional document.

The statement considered that the crisis that the country is going through is caused by the absence of the national project, and that the correct way out of it is through national consensus on constants that lead to a comprehensive political solution, in which all political forces participate. active. participate, except for the dissolved National Congress.

At the end of its deliberative conference, the Revolutionary Front officially launched a national integrated initiative of consensus between the parties to resolve the Sudanese crisis, which contains a roadmap and an implementation matrix.

As for the second stage, it includes a dialogue between the political forces that leads to the production of a focus on issues related to the system of government, the constitution and the elections,” according to the statement.

The statement called for the need to stop the violence against protesters, release political prisoners from the revolutionary forces, and lift the state of emergency.

The Revolutionary Front welcomed any amendment to the constitutional document, as long as it does not affect the Juba Agreement for the peace of Sudan.

The final declaration emphasized the full implementation of the Juba Agreement as an indivisible element and noted the importance of implementing the security arrangements clause to achieve a unified national army.

The statement noted that the country’s deteriorating economic situation needs urgent reforms to ease the suffering and adopt a strategic plan to increase production, attract investment and activate trade.

The Revolutionary Front is an alliance of some 7 armed and civilian factions, all of which returned to Khartoum after years of war under an agreement with the Sudanese government signed in Juba on October 3, 2020, according to which they were participating in the transition authority.

Following the decisions of the head of the Sudanese army, Lieutenant General Abdel Fattah Al-Burhan, issued on October 25, which dissolved the government and imposed a state of emergency in the country, members of the Revolutionary Front led by Hadi Idris maintained their positions in the transitional authority, in application of the Juba Agreement.

Malik Agar, Al-Taher Hajar and Al-Hadi Idris, members of the Sovereignty Council, participated in the deliberative conference of the Revolutionary Front in Roseires, while Mona Arko Minawi and Jibril Ibrahim were notably absent.