Details of an upcoming prisoner swap deal in Yemen 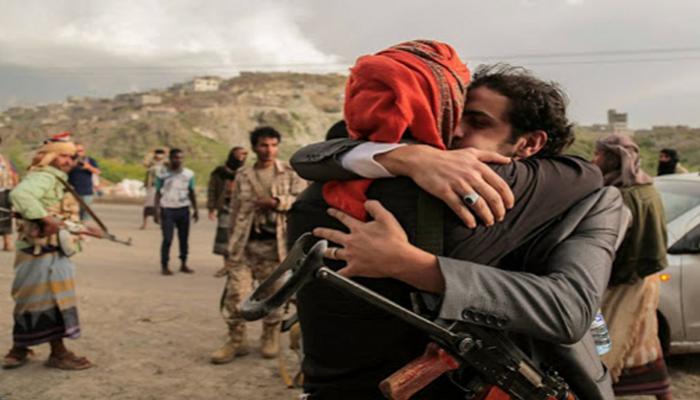 A senior government official unveiled on Sunday a final United Nations-sponsored proposal for a prisoner swap deal that includes 2,223 prisoners and hostages.

Between the Yemeni government and the Houthi militia The government official told Al-Ain News, preferring not to be identified, that the final proposal includes the release of the Houthi militia, the brother of the Yemeni president, Major General Nasser Mansour, and the former Defense Minister Major General Mahmoud Al-Subaihi, Muhammad Muhammad Abdullah Saleh, and Afash Tariq Muhammad Salih, son and brother of National Resistance leader Tariq Saleh.

The government official explained that the understandings sponsored by the UN envoy’s office in Yemen have been carried out for some time with the Houthi militia, and that the total number of the final proposal includes 2,223 prisoners and kidnapped from both sides.

He noted that the proposal includes the release of the Houthi militia in a first batch of 800 hostages and captives, with the Yemeni government releasing the same number of prisoners of war to Iranian-backed coup militias.

The official warned against definitively agreeing on the latest proposal with the Houthi militias, stressing that “it is under study and once it is definitively approved, an official memorandum will be sent to the envoy’s office and published in the media.”

It is noteworthy that the agreement was not officially announced until 19:00 GMT by the coalition or the United Nations, which is part of a proposal and not an agreement that was made on the ground as the Houthis promote, and the negotiations are still in process. stage of exchange of final declarations.

In this regard, a member of the government delegation to the prisoners’ agreement, Majed Fadil, criticized the promotion of the initiative by the Houthi militias, stating that “the issue of prisoners and hostages is a humanitarian issue that cannot be bid, and neither party has the right to commercialize what has been done on its own initiative”.

He indicated on his Twitter account that the understandings were the result of a great effort and a long journey of negotiations and consultations under the auspices of the office of the UN envoy to Yemen.

The Houthi militia had announced a deal made under the auspices of the United Nations to free 1,400 Houthi prisoners in exchange for 823 hostages and prisoners, including 16 Saudis, as well as President Hadi’s brother and former Defense Minister Mahmoud Al-Subaihi, without referring to the son and brother of Tariq Saleh.

According to the Houthi militia, the exchange of statements will take place next Tuesday, March 29.

The prisoners’ agreement is one of the terms of the Stockholm Agreement signed between the Yemeni government and the Houthi militia on December 18, 2018. Although it is a purely humanitarian dossier, the coup plotters take it as an important bargaining chip and they refuse to release the prisoners. prisoners and kidnapped according to the principle of “everyone for everyone”.

The United Nations sponsored the first exchange agreement between the Yemeni government and the Houthi militia in October 2020, which included 1,065 detainees and represented the most notable advance in the Yemeni crisis.