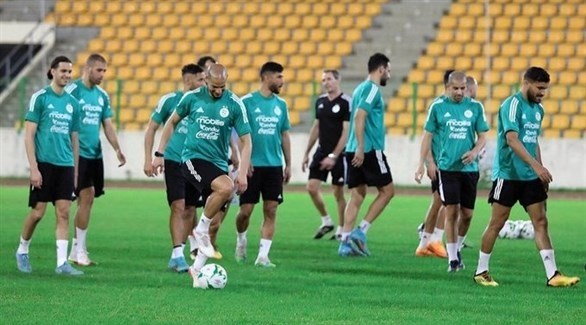 Just weeks away from their emergency slump at the 2021 Africa Cup of Nations, Algeria returns to Cameroon aiming to shake off the bad memories that brought it down from the continental championship in the Lions’ untamed stadiums.

The Algerian national team will visit its counterpart from Cameroon tomorrow, Friday, in the first leg of the decisive final day of the African qualifiers for the 2022 World Cup.

Earlier this year, the Algerian team traveled to Cameroon with the aim of defending their continental title, but the team failed miserably and said goodbye to the tournament from the first round (group stage) without achieving any victory. His record was undefeated. , since the team failed to match the world record in this regard, which is registered in the name of the Italian national team (37 consecutive games).

Despite this failure, Djamel Belmadi remained as the team’s technical director, not least because he managed to lead the team to the continental title in 2019 following the absence of the “Desert Warriors” from the podium since they won the championship title for the first time. at their stadium in 1990.

The two teams meet in Douala, which witnessed all three of Algeria’s games in the African Cup of Nations, which makes the Algerian side very keen to shed memories of the recent past.

Belmadi is currently looking to make up for the failure to defend the continental title by making a comeback in the world championship through the next edition scheduled to take place in Qatar this year.

If the Algerian team crosses to the final in Qatar, this will be their fifth participation in the history of the World Cup, knowing that the team missed the 2018 edition in Russia after two consecutive appearances in 2010 in South Africa and 2014 in Brazil. .

But the hopes of the Algerian team will go through surpassing one of the most prominent teams on the African continent, which is the Cameroonian team, which holds the African record for the number of participations in the World Cup with seven previous appearances.

Contrary to what happened in the Algerian national team, and despite the fact that Cameroon (Indomitable Lions) was in third place in the African Cup of Nations, the Cameroonian Football Federation dismissed the Portuguese coach Antonio Conceição and replaced him with the national coach Rigport Song.

Thus, the confrontation between the teams of Algeria and Cameroon will be with a national mentality.

Song boasts an outstanding group of players, including strikers Vincent Aboubacar and Karl Toko Ekambi, who topped the list of top scorers at the last African Cup of Nations.