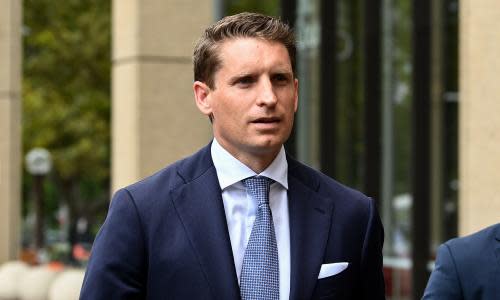 Deputy Defense Minister, former SAS officer Andrew Hastie, told a court there was a “widespread view” within the SAS that Ben Roberts-Smith was a bully towards his comrades.

The minister told the federal court Thursday that the version reported by Roberts-Smith of a mission they both served in Afghanistan was an “alternate universe” to what he observed.

Hastie was called to testify by three newspapers defending a libel action brought by Roberts-Smith, who alleges media reports portrayed him as committing war crimes, including murder, as well as acts of intimidation and domestic violence.

Newspapers advocate a defense of the truth. Roberts-Smith, who received the Victoria Cross, denies any wrongdoing.

Hastie testified briefly Thursday night. It is scheduled to resume on Friday.

Hastie is a former SAS captain who served alongside Roberts-Smith in Afghanistan. He testified Thursday about an SAS mission to an insurgent base in Syahchow in October 2012.

He told the court the version of events of the Roberts-Smith operation, given by Roberts-Smith to the SAS high command, which was an “alternate universe” to what he observed.

Syahchow’s 2012 mission is the site of an alleged “bleeding” — the practice of initiating a new soldier into the regiment by ordering him to record his first “kill” in the operation, allegedly often from a unarmed prisoner. In his defense brief, the newspapers allege that Roberts-Smith ordered another soldier, Person 66, to kill an unarmed captive Afghan man who had been taken to a camp. Roberts-Smith has denied the allegation.

Asked directly, during his deposition last year, if he had ordered Person 66 to execute a prisoner, Roberts-Smith said, “I didn’t.” Person 66 is due to testify after Hastie.

Hastie also told the court that he remembered Roberts-Smith telling him “officers shouldn’t be on the ground with soldiers, they should be in an elevated position away from where the action is.”

Earlier on Thursday, a woman who had an affair with Ben Roberts-Smith, and who alleges he punched her in the face after a function in Parliament, told the court she feared for her safety and that of her family. children, if the adventure came to pass. was made public.

During cross-examination Thursday morning, the woman, anonymous as Person 17, was questioned at length about an affidavit she had filed with the court, seeking an order not to publish her name and any identifying details. In it she says: “I am concerned for my safety and that of my children in case our identities are revealed.”

“Despite being very secretive, it seems that some people can still find out who I am and harass me and my family.

“Obviously what I’m most concerned about is the physical and mental safety of my children.”

The court granted Person 17 the suppression order. Roberts-Smith’s attorney, Bruce McClintock SC, and once Person 17 herself have inadvertently said in open court Person 17’s name and the city in which she lives. Those details were compiled from court transcripts and online recordings.

This week in court, Person 17 said a stranger accosted her on a beach and showed him two photos of her having sex with Roberts-Smith in a Brisbane hotel room. The shots appeared to have been taken through the hotel room window.

The man threatened Person 17, she told the court: “He said ‘you’ve been dating Ben Roberts-Smith.’ He showed me the photos. he was going to tell emma [Roberts – Roberts-Smith’s then wife] about the matter or the photos would become public.”

Person 17 said Roberts-Smith had warned her that as their relationship was taking shape, he “wasn’t someone you’d want to be on the wrong side of.”

“If you turn on me, I will burn your house down. It may not be you who gets hurt, it may be people you love and care about,” Person 17 alleges, Roberts-Smith said on another occasion.

In her affidavit, Person 17 said that other people, unknown to her, had also threatened her and her family. She said her husband had received an anonymous phone call from someone who identified himself as “a friend of Ben and Emma’s.” [Roberts, Roberts-Smith’s wife]”, asking questions about the matter.

Person 17 said he received an email from an unknown account that referenced his affair with Roberts-Smith, saying “talking about yourself is a bad way to get attention.”

“I cry most days and I am anxious about what will happen next. When I go out, I often feel paranoid.”

Person 17, in his affidavit, said: “My grave fear is that if my name and identity are revealed, I will be harassed and criticized by people who support Ben and think that I am just a lying woman trying to provoke a war. hero.”

During her second day of cross-examination, Person 17 was also questioned extensively about events in early 2018, when Person 17 and Roberts-Smith attended a function at Parliament House.

As they were leaving the event, Person 17 fell down some stairs and injured his head and left thigh. She said she asked to be taken to the hospital, but Roberts-Smith refused, saying he would take care of her.

In her hotel room in Canberra, she said Roberts-Smith was angry with her, yelling “what the hell have you done?” in her face, saying she had flirted with other men and exposed their affair.

Person 17 said that he just wanted to lie down and had a headache.

She told the court, Roberts-Smith responded by saying “It’s going to hurt more,” or “I’ll show you the pain.”

“And he punched me with his right fist on the side of my face and on my left eye…I ended up lying on the bed. I just stood there still because I didn’t know what I was going to do next.”

In his affidavit, Person 17 told the court: “I have given the police photographic evidence of the black eye I suffered as a result of the assault and a series of Telegram messages from the day after the assault in which Ben is telling me. training on how I should explain my black eye to my husband.”

Person 17 told the court that he ultimately did not proceed with a formal complaint to the police.

In court Thursday, Person 17 was questioned about Telegram messages included in her affidavit, sent between Roberts-Smith and her, that discussed the injuries she had sustained and her explanation to her husband.

Related: ‘I was afraid of what he might do’: Woman tells court Ben Roberts-Smith beat her, threatened to burn down her house

During cross-examination, McClintock told Person 17 that she was intoxicated the night in Parliament and had injured her head falling down the stairs: “You don’t remember what happened.”

“That’s not right,” she replied.

McClintock called the Person 17 allegation “a complete fabrication.” “You just made it up. He didn’t hit you.”

On cross-examination, Person 17 was extensively questioned about the miscarriage of a pregnancy to Roberts-Smith. McClintock said he chose not to tell Roberts-Smith that she had lost the pregnancy via phone message “in a calculated campaign of deception, isn’t it?” McClintock said that he was “terribly dishonest … and manipulative”.

Person 17 fought back tears as he told the court, “I still wanted to see him face to face, he was still going through something horrible.”

Roberts-Smith was questioned about the alleged incident at the Canberra hotel during his testimony in court last year. He denied all allegations of violence or threatening behavior and said the allegations were “completely false.”

“The whole story is an invention,” he told the court.

Roberts-Smith said Person 17 suffered injuries to his face and side when he fell down the stairs at Parliament House. He said that he didn’t think she needed to go to the hospital, and that he took her to the hotel room where he put an ice pack on her head, he put her to bed and stayed up all night to check that she was okay. well.

“I have never been shy about using the word matter,” Roberts-Smith told the court.