Demonstrations held to support ferry workers laid off by P&O 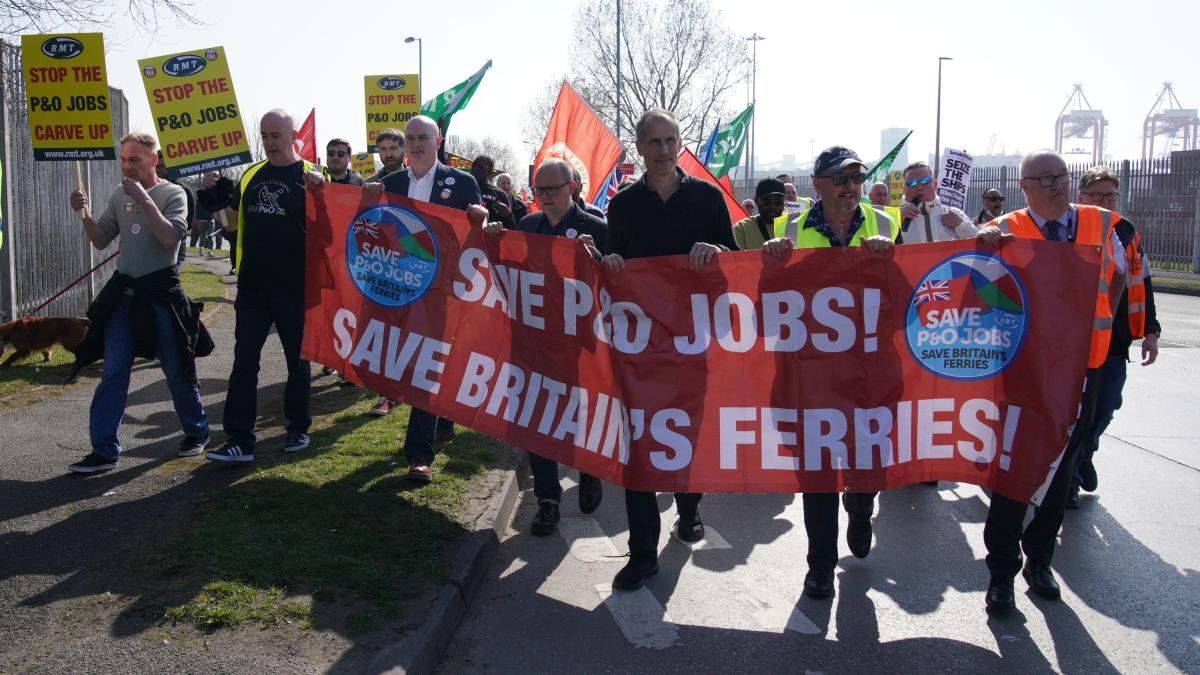 Hundreds of people have marched in protest at ports in the “fight for justice” after nearly 800 seafarers were sacked without notice earlier this month.

Demonstrations were held in Liverpool, Dover and Hull, as calls continued for a P&O Ferries boss to resign.

Crowds walked with banners and banners, chanting “P&O, what a shame” at the demonstrations on Saturday.

The marches came as a ship operated by the ferry company was detained for being “unseaworthy”.

The European Causeway vessel has been held in the port of Larne in Northern Ireland due to “failures in crew familiarisation, vessel documentation and crew training”, the Maritime and Coastguard Agency (MCA) said.

In a move that sparked widespread outrage, the company laid off hundreds of seafarers earlier this month and plans to replace them with lower-paid agency staff.

A P&O Ferries spokesperson said: “European Causeway underwent an inspection by the MCA in Larne, during which it was deemed not ready enough to be operational.

“We will review the findings, make any necessary changes and continue to work closely with the MCA to get the ship back in service.”

RMT Union General Secretary Mick Lynch said: “All of today’s protests were well attended by hundreds of people in Liverpool, Hull and Dover to support the P&O workers in their fight for justice.

“There will be more protests, more campaigns and more political pressure this week as we ramp up the fight and harness public anger over the slaughter of jobs on our ferries.”

He said the demonstrations “show that the public is on our side regarding the P&O layoffs.”

He added: “The government must enact emergency legislation and prevent P&O from sailing with under-trained and over-exploited agency crews. We want to negotiate the return of the 800 laid-off employees and make sure their wages and union conditions are protected.”

The Trades Union Congress (TUC) tweeted a video they said showed P&O stevedores in Rotterdam refusing to load goods onto a Hull-bound ferry “in solidarity with the 800 seafarers illegally fired by P&O ”.

Meanwhile, Irish union workers gathered in Dublin port opposite the P&O terminal to send support from across the Irish Sea to P&O staff.

The rally, organized by the Siptu union, was attended by the new leader of the Irish Labor Party, Ivana Bacik, with organizer Jim McVeigh telling the PA news agency the rally was aimed at “sending solidarity”.

He added: “The best thing we could do was have a rally in Dublin port outside P&O to make our concerns known.”

The UK Labor Party has written to Business Secretary Kwasi Kwarteng asking if the government will seek the removal of P&O Ferries chief executive Peter Hebblethwaite as a director under the Directors Disbarment Act 1986.

Shadow transport secretary Louise Haigh said P&O Ferries’ “disgraceful misconduct has ruined livelihoods” and called for sacked workers to be reinstated and for Mr Hebblethwaite to be “banned” as director for its role in the crisis.