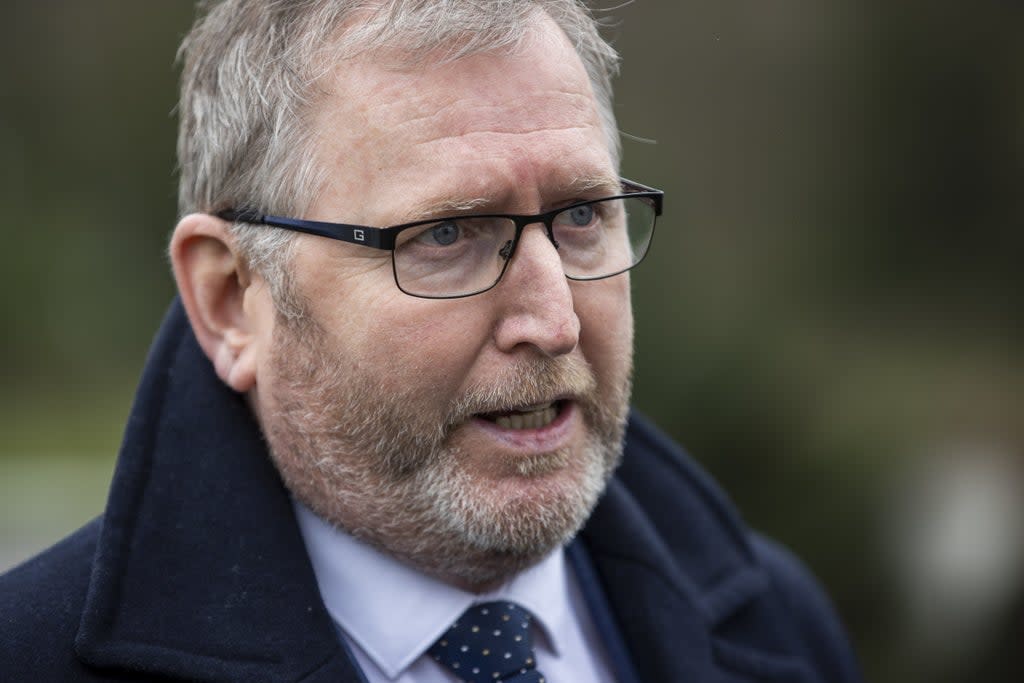 The leader of the Ulster Unionist Party accused union organizers and loyalists of the demonstrations against the Northern Ireland Protocol of stoking tension in the region.

In a lengthy statement on Sunday, Doug Beattie said his party will not participate in rallies that he said were “raising tensions” in Northern Ireland.

It was the latest in a series of protests against post-Brexit deals for Northern Ireland, which are fiercely opposed by unionists and loyalists.

The Northern Ireland Protocol remains a political problem that cannot be ignored and we have repeatedly stated that it must be replaced by a solution that works for all.

Beattie said on Sunday that demonstrations against the protocol were raising tensions, alluding to a security alert in Belfast on Friday that caused Irish Foreign Minister Simon Coveney to be evacuated from a peace event.

The UVF is suspected of involvement in the incident, which was condemned by politicians from across the political spectrum.

Police are still investigating the incident.

Mr Beattie said: “There are many issues facing the people of Northern Ireland and the most pressing and immediate one right now is the cost of living crisis, including fuel shortages.

“It is important for politicians to focus on this issue which the Ulster Unionist Party has been highlighting since last year.

“The Northern Ireland Protocol remains a political problem that cannot be ignored and we have repeatedly stated that it must be replaced with a solution that works for all.

“It is leading to real social harm. This includes terrorists back on our streets doing what they do best, terrorizing an already beleaguered society.

“There are also media reports citing UVF sources that they intend to intensify their terrorist activities in the coming weeks.

“It is now clear that the anti-protocol demonstrations are being used to raise the temperature in Northern Ireland and heighten tensions which now see a resurgence in UVF activity.

The Ulster Unionist Party will not be a part of raising tensions or the temperature by bringing people into the streets with the intention of harnessing anger.

“The Ulster Unionist Party will not be a part of raising tensions or the temperature by bringing people into the streets with the intention of harnessing anger.

“As a party, we will continue to participate in all community-led gatherings where we will respond to our critics. As party leader, I will be available, when possible, to explain my rationale for dealing with the protocol.

“But I will not add to the escalation of tensions that others seem intent on doing.”

The statement comes just weeks before the Northern Ireland Assembly election, in which the UUP hopes to run strongly against Sir Jeffrey’s DUP.

Mr. Beattie does not mention the DUP or name any person in the statement.

Beattie said his party will continue to urge the EU and the UK to move forward in finding solutions to some of the problems caused by the protocol.

He also said that the activation of Article 16, which would suspend some elements of the post-Brexit agreements in place for Northern Ireland, could be legitimate.

“We believe that activating Article 16 would be a valid use in any aspect of the protocol that is contributing to the cost of living crisis.”

But he warned: “The protocol is a political problem and it is going to be dealt with with political solutions.

If Doug Beattie made a real effort to oppose iniquitous protocol, then he would be serving unionism better.

“What we cannot allow is that a small group of people with the loudest voices lead politicians by the nose in carrying out their orders.”

The UUP leader’s statement prompted a swift response from Allister, who accused Beattie of directing an “insult” at him.

In a statement, he said: “I refute and deplore the UUP leader’s insult that peaceful and necessary protests against the Union Dismantling Protocol are increasing tensions.

“All the protests I have attended have been absolutely peaceful.

“Therefore, to adopt the tone and approach of opposing such protests is not only to echo the rhetoric of the pro-protocol brigade, but also to disparage the thousands of concerned trade unionists who have attended these peaceful protests.

“If Doug Beattie would really go out of his way to oppose unfair protocol, then he would be serving unionism better.

“Addressing the constitutional risk of GB being enacted and treated as a foreign country by the protocol, with goods originating there subject to foreign customs controls, would be a suitable starting point for a UUP that has been lackluster in its ‘opposition’ to the protocol .”