Dembélé wants to stay at Barcelona 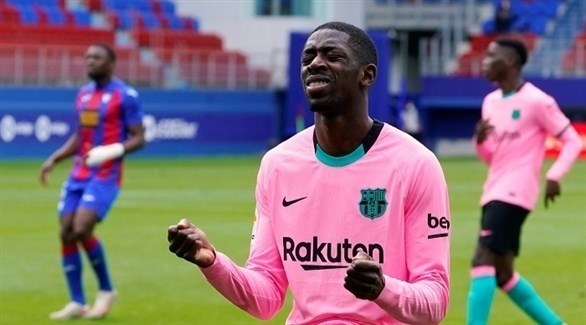 Press reports confirmed that Barcelona striker Osman Dembele wants to stay within the Catalan club’s walls, despite all the crises he went through with the ‘Blaugrana’ board, where he feels happy under coach Xavi Hernández.

And it is that, according to the popular sports program “El Chiringuito” on Mega TV, Dembélé was convinced that he could lead the team’s project under the direction of Xavi.

The French winger has played an outstanding role in recent times with Xavi and has helped the team rise in the ‘LaLiga’ table to dispute the runner-up position and revive their chances of fighting for the title despite the fact that Real Madrid is the most close, after leading the team to a clean four-way win in the Clasico over their Madrid rivals at the Santiago Bernabéu, after scoring a brace.

Dembélé’s desire to stay, whose contract will officially expire at the end of the season, comes after a period of tension with the Barcelona administration that ended with the club announcing his intransigence and his agent in his renewal requests, and then depriving him of playing for the first team, before Xavi returns to his decision and uses it again in matches.

But the difficulty of renewing the 24-year-old French striker, sought after by European clubs such as Paris Saint-Germain, lies in the need to lower his salary a lot to keep up with the economic conditions that the Catalan club is experiencing.

The source indicated that club president Joan Laporta may not be able to renew Dembélé’s contract, and his departure is still close.

It should be noted that Dembélé moved to Barcelona in the summer of 2017, from Borussia Dortmund, in a deal that came to compensate for Neymar da Silva’s sudden departure to Paris Saint-Germain.

- Advertisement -
Share
Facebook
Twitter
Pinterest
WhatsApp
Previous articleHaneen Hosam after her return to prison: screaming and crying and the Hazar bond
Next article“C’mon C’mon” by Mike Mills on film: Being a father, on the other hand, is very