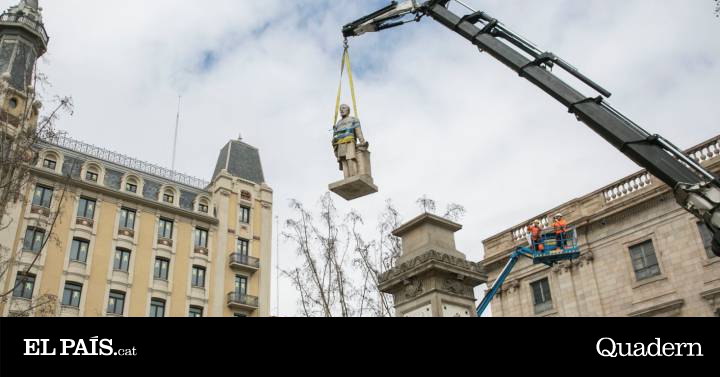 Coinciding with the beginning of the reform of Via Laietana, the Conference on Organizations of Memory and Public Space, on the model for Barcelona City Hall, addressed the different futures of the two monuments at the extreme ends of this avenue: that of Cambó and that of Antonio López . The uncertainty about the future of the monument to Cambó has recently been resolved in favor of its preservation, I understand this because of the defense Borja de Riquer gave to the Jornades. On the contrary, the municipal architect in Cap, Xavier Matilla, will announce the removal of the pedestal of López, which has been under construction since the statue’s removal in 2018 and has been the subject of various contempts as for the installation (surprisingly secretly, ate the seva apparatus) a parodic figure of a street performer, the General Passat or the recent intervention during the architecture festival with a bizarre bastide that he turned into a stage. Having maintained and consolidated the discredit in recent years, López had no defender in the debate. Tot i així, the withdrawal expresses various mistakes in the monumental politics of the current city council.

The previous legislature’s Programs of Memory commissioner and architect of the disengagement, Ricard Vinyes, has argued that the restraint will respond to requests from various anti-racist organizations for López’s sixth-tier slave trade certificate to Cuba. Not only did this legitimate demand lack a single democratic response, but the truly progressive option would create an alternative to avoid any demolition logic that reproduces the symbolic violence it criticizes.

The City Council hauria hagut to defend that the monument to López is part of the city plan of the time of the Universal Exposition of 1888, ranging from the Parc de la Ciutadella to the Monument to Colom, and that from here it offers for the Rambla fins a l’Eixample. This set is the urban nucleus of the pinnacle of prosperity of bourgeois, industrial and colonial Barcelona of the Cerdà era and includes an important monumental gallery where the triangle of monuments to López, to Colom (the de fet) evokes the Catalan participation in the Carrera d’Indies) to Joan Güell, while Juanjo Lahuerta will take part in the Jornades with solvency. These three monuments are not the only ones in this group, but they are the ones that best express their subtext: the rise and hegemony of the new bourgeoisie. This urban ensemble, full of allusions to Spanish colonialism, is both modernist and an irreplaceable document of a critical moment that will have no continuity. The later Barcelona will be anar per altre camí.

The prerequisite for this prosperity will be the colonial regime and especially Cuba. The capitals generated by the Indians will finance the industrialization of Barcelona and Eixample. And the colonial economy will be characterized by the use of more slave labor. A tot Europa: It is a tract of the “l’era de l’imperi”, according to Eric Hobsbawm. Why blame López for structural activity in Barcelona’s thriving capitalism? Hello, there will be Catalan slavers who have flown much more than López, but they will be alien to the current challenge. The main local researcher on this matter, Martín Rodrigo, author of a recent biography of López (One man, a thousand companies, which will form the academic basis for the Commemorative Commission in the second operation against the monument), has published extensively on the question. I refer to it to understand how the slave trade operates in a gray area and that, in particular, the activity of López, who transported Creole slaves from Santiago de Cuba to other towns in the city in the 1840s, “was perfectly legal at the time”. (p. 66).

From the point of view of a progressive patrimonial politics (Finns and all anti-capitalists), the eradication of the main urban shortcomings of local capitalism means that the counter-discourse loses its point of reference and its meaning. Així does not fight capitalism, it is li fa the blanquejant-lo joc. The appropriate municipal answer to the respective anti-racist demand would be something like: “We cannot eliminate such an important element of such a decisive urban historical complex”. Afegint-hi: “Yes we can, but look for other ways to represent the memory of slavery in public space and what it is like, confronting discourses and subjectivities that tell the story of the Oblidats, the Lluites and the social conquests represent “. Moreover, this is the task of the left: to deepen pluralism and not to reproduce the implicit authoritarianism in the erection or removal of monuments; you will find other contemporary forms of representation of the new postcolonial and micropolitical subjectivities. This was also the implicit request of one of the speakers at the conference, Zaida Muxí, who believed in mans i manigues, to find examples of monuments of gifts in the metropolitan area. The debate surrounding the López monument has occasionally been wasted because of this “altra monumentalitat”. It was disappointing to note the lack of ideas from the Memory Programs Commission in this regard.

In addition, there is a double standard. Faced with the accusations of Darrer Cambó as Franco’s ally, Riquer argued that “it wasn’t the only Cambó” and defended his multiple arrivals in the city, citing the need for a better argument for the monument’s removal. Similarly, we can affirm that the slave owner López “was not the only López” and that to deny his contribution and that of his successor, his son Claudio, is fallacious. Riquer’s mention of these figures does not do justice to the role of the Banco Hispano Colonial, founded by López, in financing the opening of Via Laietana, nor to the Mateix Fet, to celebrate which the business class of 1880 erected this monument, the most powerful and paradigmatic figure of the new local business in the Restoration period that will make Barcelona an economic capital. Can we remember that a monument is not named after the figure it represents, but is a document of the society that created it? Estem davant a memory program that promotes l’oblit.

Hello, there will be more Catalan slavers than López romanizing aliens for the current challenge

Given the insubstantiality and lack of rigor in López’s public challenge, one wonders if the real reasons are one of the others: López was not Catalan and is a figure who does not conform to the logic of institutional national populism. A declassat, a xarnego. Is this a false democratizing façana, est davant d’una operation by “neteja ètnica”? Is López the boc expiatori dels pecats dels esclavistes catalans? A pretext from the city council d’esquerres no li hauria de fer, de nou, el joc a l’enemic.

Fins on is postcolonial revisionism legitimate? Caldrà demolish the old, with the Taliban? When did civilization begin to be barbaric? When asked about the precedent that presupposes the removal of this monument, the Excommissionat replied that “no one has requested” that the cap altre be removed. Is patrimonial politics limited to responding to such demands, mai lliures de populisme, without a historical vision of its own? Acollint-me to the municipal tarannà, and in the meu nom and in one of a significant part of the artistic, academic and technical community, the rebutja l’operation, here demanded the return of the monument, perfectly compatible with the ongoing reform .